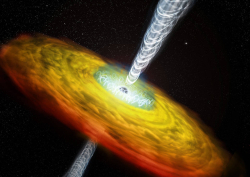 
Quasars are galaxies where most of the radiation from the galaxy comes from a tiny region near the galaxy's center. This enormous outpouring of radiation is produced by a supermassive black hole, an object so small it would comfortably fit within the confines of our solar system but which contains an amount of mass equal to millions or even billions of Suns. These supermassive black holes (unlike the dormant, 4-million solar mass monster within our own Galaxy) are actively accreting matter from their surroundings, converting gravitational potential energy into huge amounts of radiant energy, as galactic matter moves inexorably towards the gravitational well of the black hole. Much of this matter falls into the black hole, never to be seen again. But sometimes, some of this material escapes this grim fate, riding a jet of particles away from the black hole far into intergalactic space. What determines why some black holes form these jets, while others do not? A new large study of more than 700 quasars using the X-ray data from the Chandra X-ray Observatory, the XMM-Newton X-ray observatory, and ROSAT, suggests that one important ingredient for producing these particle jets is the pressence of diffuse, very hot gas near the swirling disk of matter around the black hole. This diffuse hot gas, or "X-ray corona", can be detected by its tell-tale X-ray emission. The new work implies that both the X-ray corona and the jets are connected by powerful magnetic fields formed in the hot material being accreted by the black hole. The image above is an illustration of a disk of matter swirling towards a supermassive black hole, and shows the X-ray corona surrounding the black hole and the particle jet streaming away on either side of the disk. The white lines suggest the magnetic field threaded through both the corona and jet.