A Companion for Regulus

A Companion for Regulus 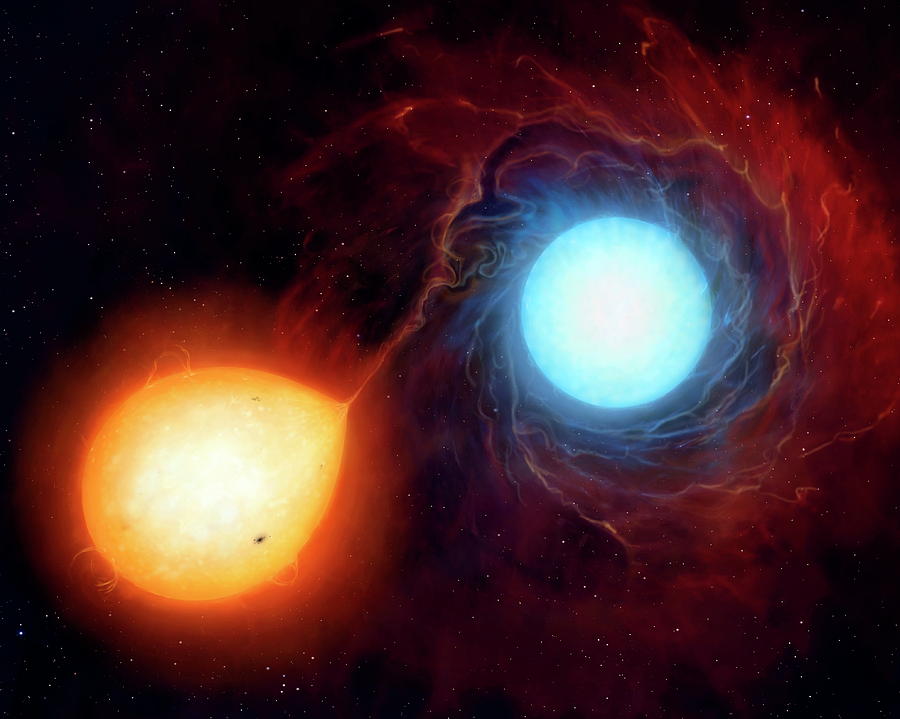 Famous star Algol in Perseus, which varies regularly as the main sequence B-type primary is being eclipsed by the evolved whittled-down K-type secondary, which was once the more massive component of this pair. Note gas flowing from the orange secondary to the blue primary. Illustration by Mark Garlick/science Photo Library.

The nearby star Regulus — the heart of the constellation Leo — has long been known to be in a binary. But though the bright, main-sequence star is easy to spot, we’ve yet to detect Regulus’s companion! A recent study now presents what may be a first look at this mysterious object...

Once thought to be a single star, this bright, blue-white, rapidly rotating main-sequence star has since been shown to wobble — it dances in a 40-day orbit with a too-dim-to-spot partner...

The dance of an interacting, evolving binary is complex. As the more massive star in the pair ages into the red giant stage, it grows larger in size. Eventually, its radius becomes comparable to the separation between it and its less massive, main-sequence partner. At this point, mass and angular momentum begins siphoning off of the massive star onto its main-sequence partner...

Gies and collaborators’ work revealed weak spectral features that have all the properties expected for the spectral signature of the stripped-down companion of Regulus.

The authors find that this surviving core is tiny — just 0.31 solar mass, compared to the Regulus’s 3.7 solar masses — and scalding hot, at perhaps 20,000 K (35,500 °F)! This stripped core will eventually cool and become a white dwarf star.

Regulus and its faint partner confirm our understanding of how stars in a close binary influence each others’ fate. What’s more, the properties of this pair suggest that there may be many, many cases of faint white dwarfs and their progenitors orbiting around bright, rapidly rotating stars.

Re: A Companion for Regulus 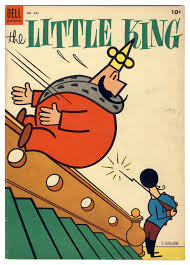 <<The Little King is a 1934-1975 American gag-a-day comic strip created by Otto Soglow, telling its stories in a style using images and very few words, as in pantomime. The strip is notable for having virtually no dialogue; the title character never speaks. The Little King (mustachioed, bearded, and clad in velvet and ermine) was small of stature, but as wide as he was tall. He was a childlike, cheerful fellow who lived to have fun. The final panel of the comic strip often showed His Majesty pursuing a hobby, playing a children's game, flirting with a pretty woman, or otherwise enjoying himself in an unkingly fashion while neglecting his "official" duties.


Click to play embedded YouTube video.
Soglow's character first appeared on June 7, 1930 in The New Yorker and soon showed signs of becoming a successful strip. The Little King began publications in comic book issues from 1933, was licensed for a 1933-34 series of animated cartoons by Van Beuren Studios and featured in advertising campaigns for Standard Oil and Royal Pudding (1955). It became evident early on that William Randolph Hearst was determined to add The Little King to his King Features Syndicate newspaper strips, but he was hindered by Soglow's contractual obligations with The New Yorker. While seeing out the final period of the contract, Soglow produced a placeholder strip for King Features, The Ambassador, quite similar to The Little King in characters, style and story situations. One week after its final publication in The New Yorker, The Little King resumed as a King Features Sunday strip, on September 9, 1934.>>