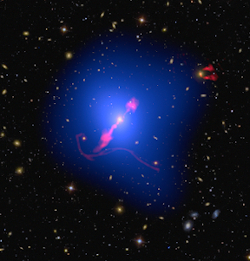 
Clusters of galaxies, containing hundreds or even thousands of individual galaxies held together by gravity, are the basic building blocks of the "cosmic web" that binds the Universe to itself. Studies of clusters of galaxies have revealed certain, apparently fundamental relations between their properties. For example, many studies have shown that the X-ray emission produced by the hot gas in between the galaxies in a cluster is closely related to the total amount of light and dark matter that the cluster contains. This relation makes sense, since the more X-ray emitting gas between the cluster, the higher the pressure of the gas, so that the gas would quickly escape from the cluster unless held gravitationally by enormous amounts of cluster matter. However, astronomers have identified some important outliers to this simple relation. The image above is an X-ray image from the Neil Gehrels Swift Observatory (in blue), a radio image (in pink) from India's Giant Metrewave Radio Telescope (GMRT), and an optical image, of a relatively nearby cluster of galaxies called CL 2015. The Swift image shows the X-ray emission from the extended hot gas distributed between the galaxies in the cluster, while the GMRT image shows radio emissions from jets emanating from a supermassive black hole in the galaxy at the center of the cluster (along with a U-shaped jet from a black hole in another galaxy, which has presumaby been bent backwards by the motion of the galaxy in its cluster orbit). CL 2015 is fairly massive, but unusally faint in X-rays, which goes against the well established relation between the pressure of the hot X-ray emitting intracluster gas and cluster mass. Through careful analysis, astronomers have now understood the root cause of this X-ray "depression". CL 2015 seems to have a more extended distribution of mass than most clusters, particularly an unusually low concentration of matter near the center of the cluster. When this unusually low central concentration of mass is taken into account, CL 2015 can be seen to be mostly consistent with the X-ray/mass relation established using more centrally concentrated clusters.

Why are some galaxy clusters underluminous? The
very low concentration of the CL2015 mass profile ~ S. Andreon et al