Saturn is quite known for its odd hexagonal weather formation over the pole, but it seems Earth has one of its own; i was looking at Earth today
https://earth.nullschool.net/#current/w ... 36,-26.403
and the temp display showed a near perfect one over the South pole! 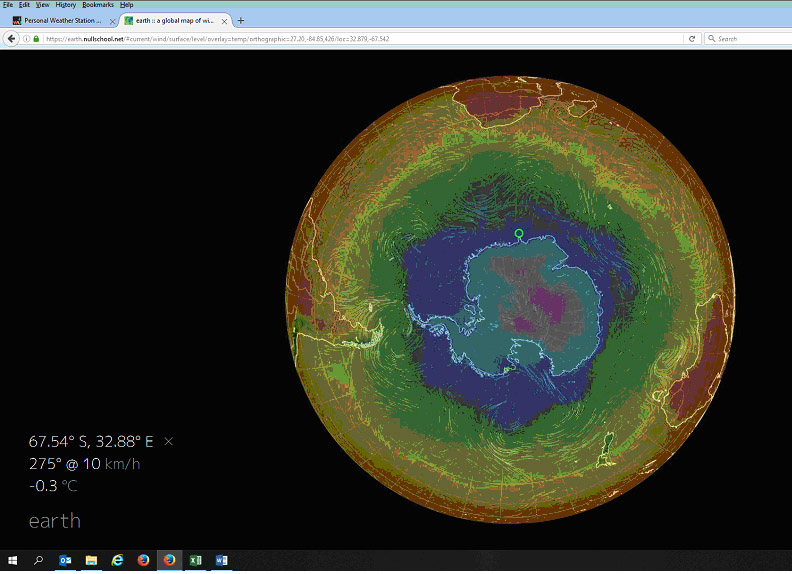 https://en.wikipedia.org/wiki/Saturn%27s_hexagon wrote:
<<Saturn's hexagon is a persisting hexagonal cloud pattern around the north pole of Saturn, located at about 78°N. The hexagon may be a bit greater than 29,000 km wide, may be 300 km high, and may be a jet stream made of atmospheric gases moving at 320 km/h. It rotates with a period of 10h 39m 24s, the same period as Saturn's radio emissions from its interior. The hexagon does not shift in longitude like other clouds in the visible atmosphere.

Saturn's hexagon was discovered during the Voyager mission in 1981 and was later revisited by Cassini-Huygens in 2006. During the Cassini mission, the hexagon changed from a mostly blue color to more of a golden color. Saturn's south pole does not have a hexagon, according to Hubble observations; however, it does have a vortex, and there is also a vortex inside the northern hexagon. Multiple hypotheses for the hexagonal cloud pattern have been developed. One hypothesis, developed at Oxford University, is that the hexagon forms where there is a steep latitudinal gradient in the speed of the atmospheric winds in Saturn's atmosphere. Similar regular shapes were created in the laboratory when a circular tank of liquid was rotated at different speeds at its centre and periphery. The most common shape was six sided, but shapes with three to eight sides were also produced. The shapes form in an area of turbulent flow between the two different rotating fluid bodies with dissimilar speeds. A number of stable vortices of similar size form on the slower (south) side of the fluid boundary and these interact with each other to space themselves out evenly around the perimeter. The presence of the vortices influences the boundary to move northward where each is present and this gives rise to the polygon effect. Polygons do not form at wind boundaries unless the speed differential and viscosity parameters are within certain margins and so are not present at other likely places, such as Saturn's south pole or the poles of Jupiter.

Other researchers claim that lab studies exhibit vortex streets, a series of spiraling vortices not observed in Saturn's hexagon. Simulations show that a shallow, slow, localized meandering jetstream in the same direction as Saturn's prevailing clouds is able to match the observed behaviors of Saturn's Hexagon with the same boundary stability.

Developing barotropic instability of Saturn's North Polar hexagonal circumpolar jet (Jet) plus North Polar vortex (NPV) system produces a long-living structure akin to the observed hexagon, which is not the case of the Jet-only system, which was studied in this context in a number of papers in literature. The north polar vortex (NPV), thus, plays a decisive dynamical role to stabilize hexagon jets. The influence of moist convection, which was recently suggested to be at the origin of Saturn's north polar vortex system in the literature, is investigated in the framework of the barotropic rotating shallow water model and does not alter the conclusions.

These natural color views (and corresponding animated movie sequences) from NASA's Cassini spacecraft compare the appearance of Saturn's north-polar region in June 2013 and April 2017. The comparison shows how clearly the color of the region changed in the interval between the two views, which represents the latter half of Saturn's northern hemisphere spring. In 2013, the entire interior of the hexagon appeared blue. By 2017, most of the hexagon's interior was covered in yellowish haze, and only the center of the polar vortex retained the blue color. The seasonal arrival of the sun's ultraviolet light triggers the formation of photochemical aerosols, leading to haze formation. The general yellowing of the polar region is believed to be caused by smog particles produced by increasing solar radiation shining on the polar region as Saturn approached the northern summer solstice on May 24, 2017. Scientists are considering several ideas to explain why the center of the polar vortex remains blue while the rest of the polar region has turned yellow. One idea is that, because the atmosphere in the vortex's interior is the last place in the northern hemisphere to be exposed to spring and summer sunlight, smog particles have not yet changed the color of the region. A second explanation hypothesizes that the polar vortex may have an internal circulation similar to hurricanes on Earth. If the Saturnian polar vortex indeed has an analogous structure to terrestrial hurricanes, the circulation should be downward in the eye of the vortex. The downward circulation should keep the atmosphere clear of the photochemical smog particles, and may explain the blue color.>>