The Sombrero Galaxy from Hubble

Explanation: What's going on in the center of this spiral galaxy? Named the Sombrero Galaxy for its hat-like resemblance, M104 features a prominent dust lane and a bright halo of stars and globular clusters. Reasons for the Sombrero's hat-like appearance include an unusually large and extended central bulge of stars, and dark prominent dust lanes that appear in a disk that we see nearly edge-on. Billions of old stars cause the diffuse glow of the extended central bulge. Close inspection of the bulge in the above photograph shows many points of light that are actually globular clusters. M104's spectacular dust rings harbor many younger and brighter stars, and show intricate details astronomers don't yet fully understand. The very center of the Sombrero glows across the electromagnetic spectrum, and is thought to house a large black hole. Fifty million-year-old light from the Sombrero Galaxy can be seen with a small telescope towards the constellation of Virgo.

Good Evening: Great picture, but I have a question about an object on the bottom edge, about one-third of the way in from the bottom left hand corner. It looks like two owl eyes at first, but appears to be a pair of twin spiral galaxies interacting with each other. What's going on out there? TIA for your help.
Top

Good catch sf. My money's on what you said. And nice image.
Top

Screen shot 2011-05-15 at 4.59.18 AM.png
You do not have the required permissions to view the files attached to this post.
A closed mouth gathers no foot.
Top

This is another of those occasions when the Hubble Telescope gets to strut its stuff. This picture reveals very fascinating and intricate structures in the Sombrero's dust lane.

But personally I wish that M104 had been imaged in Ha light as well. Ha light is very sensitive to the presence of massive stars. As pointed out in a paper by Janice C. Lee, Armando Gil de Paz, Robert C. Kennicutt, Jr., Matthew Bothwell, Julianne Dalcanton, José G. Funes, S.J., Benjamin Johnson, Shoko Sakai, Evan Skillman, Christy Tremonti and Liese van Zee, it takes stars as massive as 17 solar masses or more to ionize hydrogen gas to the amount that it emits appreciable Ha light. As it is, this Hubble image of M104 is taken through filters that are basically RGB, or F435W(B), F555W(V) and F625W(r). I you follow this link, http://heritage.stsci.edu/2003/28/original.html, you will see the original images of M104 taken through the three filters. There are very small differences between the three "filter images", except that the dust lane looks by far the blackest in the blue light image. An Ha image would have given us very good information about whether or not there is any high-mass star formation in M104, but an RGB image isn't necessarily able to tell us much about that.

M104 does emit a small, apparently a quite small, amount of far ultraviolet light. You can see M104 in the seventh row from the top as the third galaxy from the right in this GALEX poster of galaxies: http://www.galex.caltech.edu/media/glx2 ... img01.html. (Warning: the small page doesn't show you very much, and the large page is massive.) In this galaxy poster, blue represents far ultraviolet light from really hot and massive stars, and yellow represents near ultraviolet light from star that are not necessarily very massive. The picture of M104 reveals only traces of blue light, which means there aren't many hot massive star in this galaxy at all.

For comparison you may look at this GALEX image of NGC 4565: NGC 4565 often comes through as a quite red galaxy, and personally I have never seen a photo of this galaxy that has revealed the presence of an emission nebula in it. But in the GALEX image of NGC 4565, there is quite a lot of far ultraviolet light, mapped as blue, from massive stars. Here, however, is an image of NGC 4565 where it looks quite yellowish:

It seems clear, in any case, that M104 is poor in star formation and in hot bright stars, more so than NGC 4565.

There are TWO 'owl eyes'. OMG

http://www.seinfeldscripts.com/TheFoundation.html wrote:
Elaine: Well, Mr. Peterman, I've got a really good idea for a hat. It combines the spirit of old Mexico with a little big city panache. I like to call it the Urban Sombrero.

J. Peterman: (rubbing his neck) Oh, my neck is one gargantuan monkey fist.

Elaine: Well, see, it's... businessmen taking siestas. You know, it's the, uh, the Urban Sombrero.

[Elaine takes out the Urban Sombrero and puts it on.]

Jerry: What is that?

Elaine: It's the Urban Sombrero. I put it on the cover.

Jerry: Well, nobody sees the... cover.

Kramer: What is that?

Elaine: Its the Urban Sombrero, I put it in the last catalog.

Monopoly Seinfeld Game feature tidbits of the show that are easily recognizable: Monk’s Diner, Central Park (Rusty the horse draws the carriage!), and Jerry’s apartment. Plus, the player’s tokens are original and wonderful—people will be fighting over who can use Fusilli Jerry!

They usually come in pairs!
A closed mouth gathers no foot.
Top

A most unique and intriguing galaxy! They usually come in pairs!

neufer!! Oh, thanks for this! Just what I needed!! (Though a bottle of peroxide and another bandage would come in handy, too...)
A closed mouth gathers no foot.
Top

I just tried reprocessing this image to bring out the dust lanes -- at the expense of everything else.
M104-extreme.jpg
I find the result interesting: Rob
You do not have the required permissions to view the files attached to this post.
Top

Rob, thanks for your image! Is it available in a larger size? If so, I'd like to see it. The Sombrero Galaxy usually looks more like a ring galaxy than a spiral to me; your reprocessing makes it look more like a spiral to me.
A closed mouth gathers no foot.
Top

Thanks for today's image.
The vast symmetry of that galaxy makes my jaw drop.

owlice wrote:Rob, thanks for your image! Is it available in a larger size? If so, I'd like to see it. The Sombrero Galaxy usually looks more like a ring galaxy than a spiral to me; your reprocessing makes it look more like a spiral to me.

Here's a much larger one.

M104-ext-lg.jpg
This time I watched while I did the deed, and it's clear I'm losing a lot of the outer-most ring -- all of the darkest outer ring just disappears. That's because I'm dragging the brightness slider down to -100 (on a scale of 0 to 100) and the contrast slider to +50. Extreme, as I said. But it seems the only way to make those inner dust lanes come clear, at least it is if I start with the Hubble image as published. I suppose I might get better results if I worked on the original single-filter-at-a-time files, but I have no knowledge of how to do that or even where I might find the files to work with. Also, of course, different filters used to image the galaxy might be much better at revealing the dust while not being washed out by the glare of that central bulge.

Rob
You do not have the required permissions to view the files attached to this post.
Top

Shouldn't that be pears

Dustin wrote:Thanks for today's image.
The vast symmetry of that galaxy makes my jaw drop.

The extreme symmetry of M104 is in itself proof that this galaxy is "quiet" as far as star formation goes.

Take a look at this SDSS image of basically "red and dead" galaxy NGC 4314 by David Hogg:

This regrettably small image shows you an almost all-yellow galaxy with a perfectly straight yellow bar, an oval bulge, a well-formed ring surrounding the bulge and two symmetrical spiral arms. Everything is perfectly symmetrical, and there is no trace of star formation anywhere in this galaxy except in a small ring around the nucleus.

Compare the symmetry of basically all "red and dead" NGC 4314 with the lack of symmetry in massively starforming large spiral galaxies M61, M99 and M101: 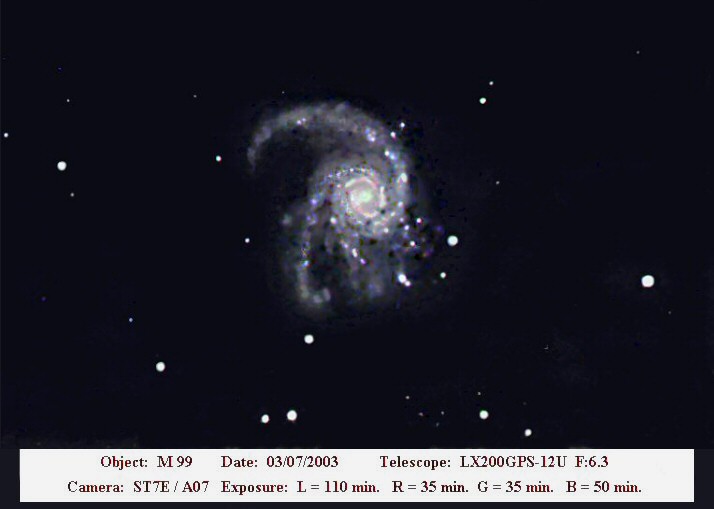 Thanks very much, Rob! That makes what's there clearer, but there doesn't seem to be very much between the outer ring and the center; lots of empty!

hpfeil, thanks for the infrared. That looks even more like a ring galaxy to me than the visual light images. That said, I think that's a stunningly beautiful image.

Thanks for that link. Interestingly, the infrared image doesn't show much of the innner spokes my drastic reprocessing of the visible wavelength image shows. I suppose that means those dust lanes are cold.

Anyone know of other images of M104 in other wavelengths?

It's a gorgeous image of M104, but how many times does it really need a repeat showing? This one dates back to 2003. Yes, I see that the full-sized version is a little larger than it was back then.

NoelC wrote:It's a gorgeous image of M104, but how many times does it really need a repeat showing? This one dates back to 2003. Yes, I see that the full-sized version is a little larger than it was back then.


Q4: Have some APOD pictures been run more than once?
A4: Yes. Many of our readers have been with us less than a year and are unaware of some really spectacular or important astronomy pictures. New information about old pictures is becoming available over the WWW. The text and links for rerun pictures will make use of this newly available information. So although the picture might be old, some of the text and links of each APOD will be new. Also, more web surfers have larger bandwidth connections, which allows us to post higher-resolution image files that can be transferred conveniently. Software to handle more sophisticated image file formats has also become more common, so the picture's size and/or format might be new. Lastly, rerunning APODs saves us time and helps us update our archive. In general, our rerun policy currently is to only rerun APODs more than one year old to keep the pictures relatively "new" to new APOD viewers. We will almost never rerun more than two pictures in any given week. So when you load the current APOD,it is still, most probably, a new picture.

From http://apod.nasa.gov/apod/ap_faq.html
A closed mouth gathers no foot.
Top
37 posts