Explanation: Why would the sky glow red? Aurora. A solar storm in 2012, emanating mostly from active sunspot region 1402, showered particles on the Earth that excited oxygen atoms high in the Earth's atmosphere. As the excited element's electrons fell back to their ground state, they emitted a red glow. Were oxygen atoms lower in Earth's atmosphere excited, the glow would be predominantly green. Pictured here, this high red aurora is visible just above the horizon last week near Flinders, Victoria, Australia. The sky that night, however, also glowed with more familiar but more distant objects, including the central disk of our Milky Way Galaxy on the left, and the neighboring Large and Small Magellanic Cloud galaxies on the right. A time-lapse video highlighting auroras visible that night puts the picturesque scene in context. Why the sky did not also glow green remains unknown.

Thoday's APOD is a very interesting image in many ways. 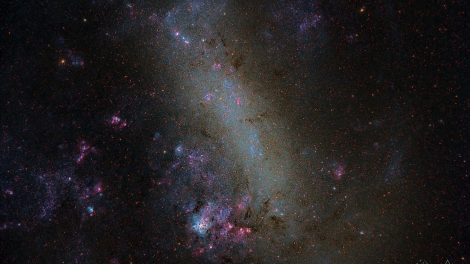 Another example of a blue-looking Tarantula Nebula.
Photo: Jonathan Green, Amit Kamble.
Full resolution here.
Note in the APOD a bright blue "star" in the Large Magellanic Cloud. That would be R136, the brilliant star cluster that ionizes the tremendous emission nebula, the Tarantula Nebula. While the Tarantula Nebula would normally look pink, even in an RGB image, it is clear that the star cluster is so much brighter than the nebula that it is no wonder if the blue stars outshine the red nebula in a low-resolution image like the APOD, particularly since it seems certain that no Hα filter has been used for it. After all, the astrophotographer's goal was to capture the aurora in the sky and make it a part of the skyscape which includes the Milky Way and the Magellanic Clouds and some bright stars and nebulas, not to resolve the deep-sky objects in stunning detail.

Another example of a blue-looking Tarantula Nebula can be seen at left, and there are other examples, too.

I really like the annotation of the APOD, and I particularly appreciate that 47 Tucanae has been pointed out, just south of the Small Magellanic cloud. 47 Tucanae is the second brightest globular of the Milky Way, so it certainly deserves attention.

However, the brightest Milky Way globular of them all is also in the picture, and it was overlooked! Omega Centauri is the fuzzy whitish blob in the upper left part of the picture, to the left of the Coalsack and the Southern Cross.

And of course... even I like the aurora a lot! I like the way it shimmers and changes color between orange, brick red, pink and purple.

It's Chinatown a weekend, Peter.

No one has time to update recycled weekend APODs.
Art Neuendorffer
Top

Very nice... I am going to have to take my telescope to the southern hemisphere sometime... but probably won't as I am older, and don't travel well... sigh... darn Space Squirrels....

mellyrn wrote:Why are stars so brilliantly visible through atmosphere but nearly invisible from space? Why do we see soooo many more stars and features in today's image than in https://www.nasa.gov/sites/default/file ... -86375.jpg or https://www.nasa.gov/sites/default/file ... -27869.jpg ? City lights are really that much brighter than the cosmos?

The images from space that you link are 0.1 and 0.2 second exposures. Today's image is a 30-second exposure (say 15-second equivalent allowing for half the ISO setting). You expose an image 100 times longer you're going to see many more stars. And yes, from space cities on the ground are much brighter than the stars.
Chris

It's also not hard to find images of the Milky Way shot from the ISS: https://www.nasa.gov/content/milky-way- ... ce-station

Kind of hard to get a camera mounted and tracking stars for much longer exposures on a free-falling space station, I imagine.
Just call me "geck" because "zilla" is like a last name.
Top

geckzilla wrote:
It's also not hard to find images of the Milky Way shot from the ISS: https://www.nasa.gov/content/milky-way- ... ce-station

Kind of hard to get a camera mounted and tracking stars for much longer exposures on a free-falling space station, I imagine.

<<Steadicam is a brand of camera stabilizer mounts for motion picture cameras invented by Garrett Brown. It mechanically isolates the operator's movement, allowing for a smooth shot. The Steadicam was introduced to the industry in 1975 by inventor and cameraman Garrett Brown. A Steadicam rig was employed during the filming of Return of the Jedi (1983), in conjunction with two gyroscopes for extra stabilization, to film the background plates for the speeder bike chase. Brown, who personally operated the shot, walked through a redwood forest, with the camera running at a speed of less than one frame per second. The end result, when projected at 24 frames per second, gave the impression of flying through the air at perilous speeds.>>