The Calabash Nebula from Hubble

Explanation: Fast expanding gas clouds mark the end for a central star in the Calabash Nebula. The once-normal star has run out of nuclear fuel, causing the central regions to contract into a white dwarf. Some of the liberated energy causes the outer envelope of the star to expand. In this case, the result is a photogenic proto-planetary nebula. As the million-kilometer per hour gas rams into the surrounding interstellar gas, a supersonic shock front forms where ionized hydrogen and nitrogen glow blue. Thick gas and dust hide the dying central star. The Calabash Nebula, also known as the Rotten Egg Nebula and OH231.8+4.2, will likely develop into a full bipolar planetary nebula over the next 1000 years. The nebula, featured here, is about 1.4 light-years in extent and located about 5000 light-years away toward the constellation of Puppis.

http://asterisk.apod.com/viewtopic.php?p=266611#p266611
Know the quiet place within your heart and touch the rainbow of possibility; be
alive to the gentle breeze of communication, and please stop being such a jerk. — Garrison Keillor
Top

calabash? nah, that's the character from spy vs. spy.

A challenge for Ann, try finding it in this image!
Top

https://en.wikipedia.org/wiki/Jimmy_Durante wrote:
Click to play embedded YouTube video.
<<James Francis "Jimmy" Durante (February 10, 1893 – January 29, 1980) was an American singer, pianist, comedian, and actor. Durante's radio show was bracketed with two trademarks: "Inka Dinka Doo" as his opening theme, and the invariable signoff that became another familiar national catchphrase: "Good night, Mrs. Calabash, wherever you are." For years Durante preferred to keep the mystery alive. One theory was that it referred to the owner of a restaurant in Calabash, North Carolina, where Durante and his troupe had stopped to eat. He was so taken by the food, the service, and the chitchat he told the owner that he would make her famous. Since he did not know her name, he referred to her as "Mrs. Calabash". Another idea was that it was a personal salute to his deceased first wife, Jeanne (Olsen) Durante, who died in 1943. "Calabash" might be a mangle of Calabasas, the California city where they made their home during the last years of her life.

At a National Press Club meeting in 1966 (broadcast on NBC's Monitor program), Durante finally revealed that it was indeed a tribute to his wife. While driving across the country, they stopped in a small town called Calabash, whose name she had loved. "Mrs. Calabash" became his pet name for her, and he signed off his radio program with "Good night, Mrs. Calabash." He added "wherever you are" after the first year. Durante's first wife was Jean "Jeanne" Olson, whom he married on June 19, 1921. She was born in Ohio on August 31, 1896. She died on Valentine's Day in 1943, after a lingering heart ailment of about two years. She was 46 years old when she died. Her death was not immediately expected, as Durante was touring in New York at the time and returned to Los Angeles right away to complete the funeral arrangements.>> 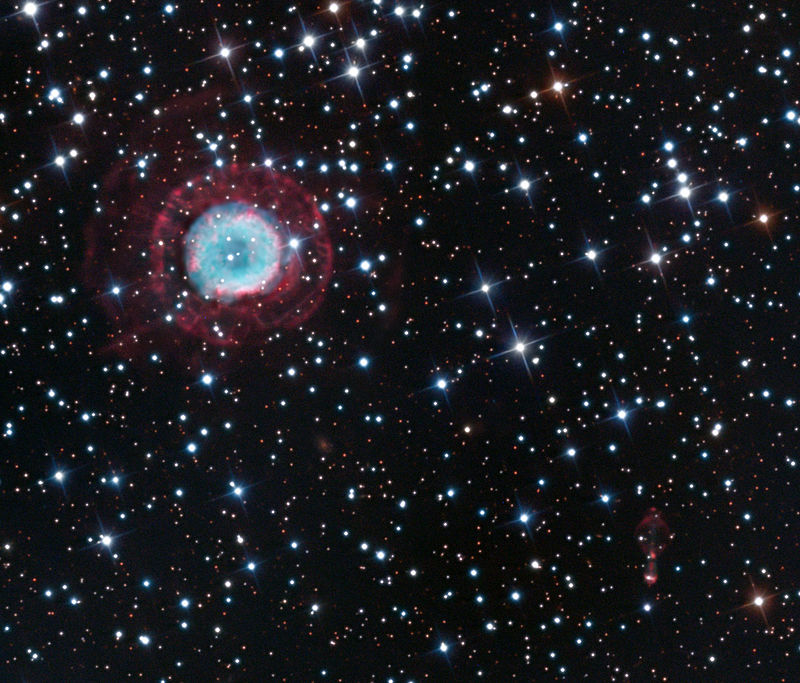 <<NGC 2438 is a planetary nebula about 3,000 light years away in the constellation Puppis. It was discovered by William Herschel on March 19, 1786. NGC 2438 appears to lie within the cluster M46, but it is most likely unrelated since it does not share the cluster's radial velocity. The case is yet another example of a superposed pair, joining the famed case of NGC 2818.

Long exposures have shown that this planetary nebula has an extended halo, while the more easily visible portion probably dates to the death of the red giant in its center.

The central star of this planetary nebula is a 17.7-magnitude white dwarf, with surface temperature of about 75,000 K. It is one of the hottest stars known.>>

starsurfer wrote:A challenge for Ann, try finding it in this image!

Thanks, it wasn't hard, after looking at Adam Block's excellent image!

It was so satisfying to see an RGB image of the Calabash Nebula, too. I note that it is almost "all red" from hydrogen, unlike the fully developed planetary nebula that is seemingly situated quite close to it, NGC 2438. NGC 2438 is dominated by bright blue-green emission from oxygen.

Fascinatingly, NGC 2438 appears to be located inside the rich open cluster M46, except it isn't really. (Thanks for the info, Art!

) I have to wonder if its apparent neighbor, the Calabash Nebula, has anything to do with M46, or if it is a foreground or a background object.

Ah, thanks! I was too lazy to google!

Okay, new post, because if the Calabash Nebula is indeed a member of open cluster M46, then we should be able to make a qualified guess as to the progenitor of this proto-planetary. According to Wikipedia, the estimated age of M46 is about 300 million years. That means that the progenitor of the Calabash ran out of both hydrogen and helium in its core in about 300 million years. What kind of star runs through its main sequence and its red giant lifetime so quickly? Okay... this isn't a B-type star or a planetary nebula, but a pulsar. I just like the picture. Sue me!
Image credit: NASA/JPL-Caltech/SAO, source: https://www.nasa.gov/jpl/nustar/pia18836.
My software, Guide, suggests that there are still stars of late spectral type B in M46. So I'm going to guess that the progenitor star of the Calabash Nebula was a mid-to-late-type spectral type B star, of perhaps, say, spectral typ B7, starting its life with at least three solar masses under its belt, maybe as much as 3.5 or possibly four solar masses.

As Yoda would have said: Powerful stars, they were! Planetary nebulae, they are!

For some reason it looked like Babylon 5 when I first viewed it.
Top

I get a Protoss vibe from it myself.
But now that you mention it I see the B5ish there too.
Top

Beautiful. It does have good protoss colors.
But mainly looks to me like a jedi light-saber in the process of extension.
Mark Goldfain
Top

Awesome image... I hadn't heard of it before. I feel a bit, "bi-polar" myself... I have meltdowns from time to time... maybe I am about to become a planetary nebula???

The Calabash nebula looks like some of the old fashioned vacuum tubes.
Top

Wow that's a fascinating image. It's looks too nice to be called the Rotten Egg Nebula

PS. I wonder if the Universe has a smell?