Just read up on the Cygnus X-1 beasty, (as Scotty would have called it) allowing me to make some refinements to what I've said before. According to Jim Kaler HDE 226868 is "a magnificent, massive blue class O (O9.7) supergiant" with a surface temperature estimated at 30,000 K. (3 times hotter than geck's blue lightning?)

The matter feeding the BH is not spilling over the systems Roche lobe (point of equal attraction between the centers of star and BH). [I think some illustrations of Cygnus X-1 give this impression.] The accretion disk is feed by the O star's stellar wind.

So, how freaking hot could HDE 226868's stellar winds be? (Rhetorical question, I have no idea) Then, take this plasma and compress it (which heats it further) as it is funneled into the accretion disk. Is naked (that is, not covered up by thousands of kilometers of star) fusion going on here? Quite likely, I would think.

Re: Z-pinch fusion of hydrogen?

https://en.wikipedia.org/wiki/Pinch_(plasma_physics) wrote:
<<A pinch is the compression of an electrically conducting filament by magnetic forces. The conductor is usually a plasma, but could also be a solid or liquid metal. Pinches were the first device used by humankind for controlled nuclear fusion. The phenomenon may also be referred to as a Bennett pinch (after Willard Harrison Bennett), electromagnetic pinch, magnetic pinch, pinch effect or plasma pinch. Pinches occur naturally in electrical discharges such as lightning bolts, the aurora, current sheets, and solar flares.>>

Fascinating, Art. I hadn't really thought of what causes the bright light of lightning bolts. So it is indeed fusion?

[url=http://newatlas.com/first-optical-spectrum-ball-lightning/30545/]Ball lightning[/url] [b][color=#0000FF]appears at the impact point of a lightning strike, where its emission spectrum is recorded by researchers in China (Photo: Physics[/color][/b])

If that were so then we would all be running our cars on Mr. Fusion

Ann wrote:
Some years ago a 14-year-old Swedish girl was knocked unconscious by a bolt of lightning. Otherwise unhurt, she told reporters afterwards: "All I remember is a flash of bright blue light."

So, Art, and others who might know, are lightning bolts typically hot enough to be blue? What temperature are they usually?

About the same as the surface of the Sun...hence white.

That's a long way from the temperatures near the center of the Sun where fusion takes place.
Last edited by neufer on Sun Feb 19, 2017 3:30 pm, edited 1 time in total.
Art Neuendorffer
Top

Lightning doesn't produce black body radiation. That requires a medium much more dense than our atmosphere. Lightning is dominated by a large number of emission lines, which change rapidly over a period of microseconds as the strike cools- from double ioninzed lines, to single ionized lines, to neutral lines. FWIW, the strongest line near the end of the stroke life is H-alpha, so lightning can appear red in some images caught at exactly the right time with high speed cameras. But visually, it's white.

Untitled-1.gif
You do not have the required permissions to view the files attached to this post.
Chris

Really! That just blew my mind! Can't imagine what it must have done to Ann.

Blue bliss, and then extinction?

Hmm. You don't need to say hi to me yet, ye Blue Blow of Lightning.

And if you're just white, I ask to to stay well away from me, please!

Ann wrote:And if your'e just white, I ask to to stay well away from me, please! :evil:

White to your eyes... but a million volts across your visual cortex is bound to be... interesting.
Chris 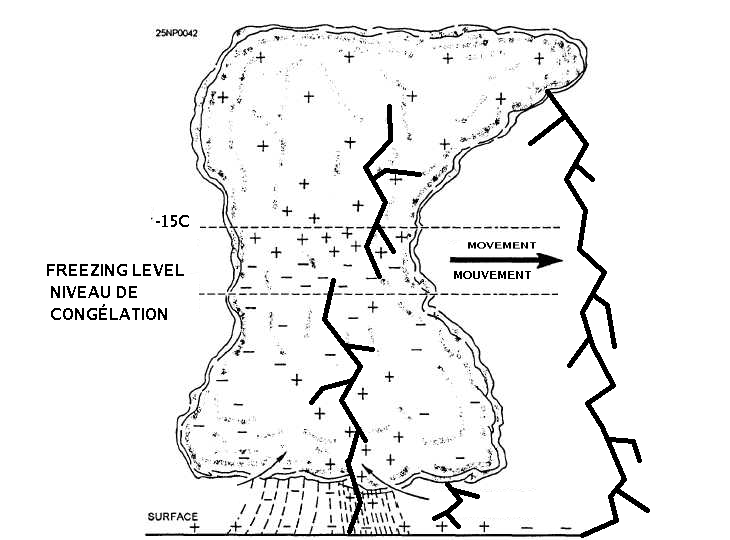 <<When the local electric field exceeds the dielectric strength of damp air (about 3 million volts per meter), electrical discharge results in a strike, often followed by commensurate discharges branching from the same path. Mechanisms that cause the charges to build up to lightning are still a matter of scientific investigation. New study confirming dielectric breakdown is involved. Rison 2016. Lightning may be caused by the circulation of warm moisture-filled air through electric fields. Ice or water particles then accumulate charge as in a Van de Graaff generator.

Unlike the far more common "negative" lightning, positive lightning originates from the positively charged top of the clouds (generally anvil clouds) rather than the lower portion of the storm. Leaders form in the anvil of the cumulonimbus and may travel horizontally for several kilometers before veering towards the ground. A positive lightning bolt can strike anywhere within several kilometers of the anvil of the thunderstorm, often in areas experiencing clear or only slightly cloudy skies; they are also known as "bolts from the blue" for this reason. Positive lightning typically makes up less than 5% of all lightning strikes.

Because of the much greater distance to ground, the positively charged region can develop considerably larger levels of charge and voltages than the negative charge regions in the lower part of the cloud. Positive lightning bolts are considerably hotter and longer than negative lightning. They can develop six to ten times the amount of charge and voltage of a negative bolt and the discharge current may last ten times longer. A bolt of positive lightning may carry an electric current of 300 kA and the potential at the top of the cloud may exceed a billion volts — about 10 times that of negative lightning. During a positive lightning strike, huge quantities of extremely low frequency (ELF) and very low frequency (VLF) radio waves are generated.

As a result of their greater power, as well as lack of warning, positive lightning strikes are considerably more dangerous. At the present time, aircraft are not designed to withstand such strikes, since their existence was unknown at the time standards were set, and the dangers unappreciated until the destruction of a glider in 1999.>>

Please could someone mark the appropriate locations in this APOD image to show the location of:
HDE 227018
Cygnus X-1
HDE 226868
Top Yes, thank you very much!
Top

I just checked HD 227018 with my software, and I also checked the two bright orange stars close to it. (One orange star is just to the lower left of HD 227018, while the other one is further to the left.) Interestingly, both orange stars are possibly at the same distance as the blue O-type star. Therefore it is possible - not at all certain, but possible - that the evolved orange giants and the hot blue O-type star are related. Could it be that the orange stars represent the first wave of massive star formation in the Tulip Nebula, whereas HD 227018 is the second wave?

rstevenson wrote: In the artist's illustration above, there is a small white point of light where the material from the blue giant blends into the orange stream orbiting the black hole. ... what could it represent?

Ann wrote:I'm just guessing, mind you. Could that perhaps be the spot where gas flowing from the blue giant companion hits the swirling accretion disk, so that a lot of energy is produced in that small spot?

neufer wrote:All I can say is that I think the 'artwork' itself was probably based on the Z-PINCH fusion idea (rather than any collision).

BDanielMayfield wrote:That's a fine answer. So, as with many things, the jury is still out, as it were.

There is a paper:
arXiv:1104.4181 [pdf, ps, other] The flare model for X-ray variability of NGC 4258
T. Trzesniewski, B. Czerny, V. Karas, T. Pechacek, M. Dovciak, R. Goosmann, M. Nikolajuk
That discusses hot-spots forming in accretion disks. I'm not sure if this is the notion that drove the artist to plot a white spot in the image we've been discussing, but in that paper they give an overview statement:

The idea of X-ray emission coming from multiple locations within/above accretion disks around a black hole is motivated by the important role of magnetic fields in the process of accretion. The original formulation of the flare model by Galeev et al. (1979) was followed by numerous
papers (e.g. Di Matteo 1998; Nayakshin & Kazanas 2001; Merloni & Fabian 2001; Collin et al. 2003; Goosmann et al. 2007b). A common theme to these models is an underlying assumption of a standard-type accretion flow driving the magnetic field.