Comments and questions about the APOD on the main view screen.
53 posts

vendetta wrote:
This is a PR image to show the lasers around the trapezium. Indeed due to the small parallax you have to shift the pointing a bit so that the plumes nicely encircle the trapezium.

I don't know off the top of my head the exact distance between UT4 and Guisard's telescope, but the edge of the platform is ~80m from UT4, not more.

So UT4 would probably be taking a 9' x 9' picture centered halfway between trapezium & M43
... which in standard parlance would qualify as a picture of M42.

(Or was it a PR image not involving a UT4 image at all?)
Art Neuendorffer
Top

So UT4 would probably be taking a 9' x 9' picture centered halfway between trapezium & M43
... which in standard parlance would qualify as a picture of M42.

Here's a possible analysis. The actual artificial star square is 7 arcmin on each side. The lasers come in from the southwest, suggesting the telescope is on a heading of about 56° from UT4. And if we look at the facility, there is a pad or small structure right on that line, 75 meters away. (Not sure if that location qualifies as the "platform", however.)

If we take a distance of 75 meters, an assumed sodium layer height at the start of the plume of 85 km, then the parallax is 3 arcmin. That would put the telescope target just a little northeast of the Trapezium, still well inside M42.

paranal.jpg
You do not have the required permissions to view the files attached to this post.
Chris

Yes, that logical correlation to horizontal coordinates does fall apart. Actually, the heading (azimuth) is close to 311° & 63° altitude.
Using graphical and necessary trigonometric analysis, I'm quite sure of the local circumstances comprising the APOD image including the 50-cm observatory location, time and consequently AZ/ALT of M42. See the APOD overlaid on a Stellarium field below (M42 coordinates and time are on the image): 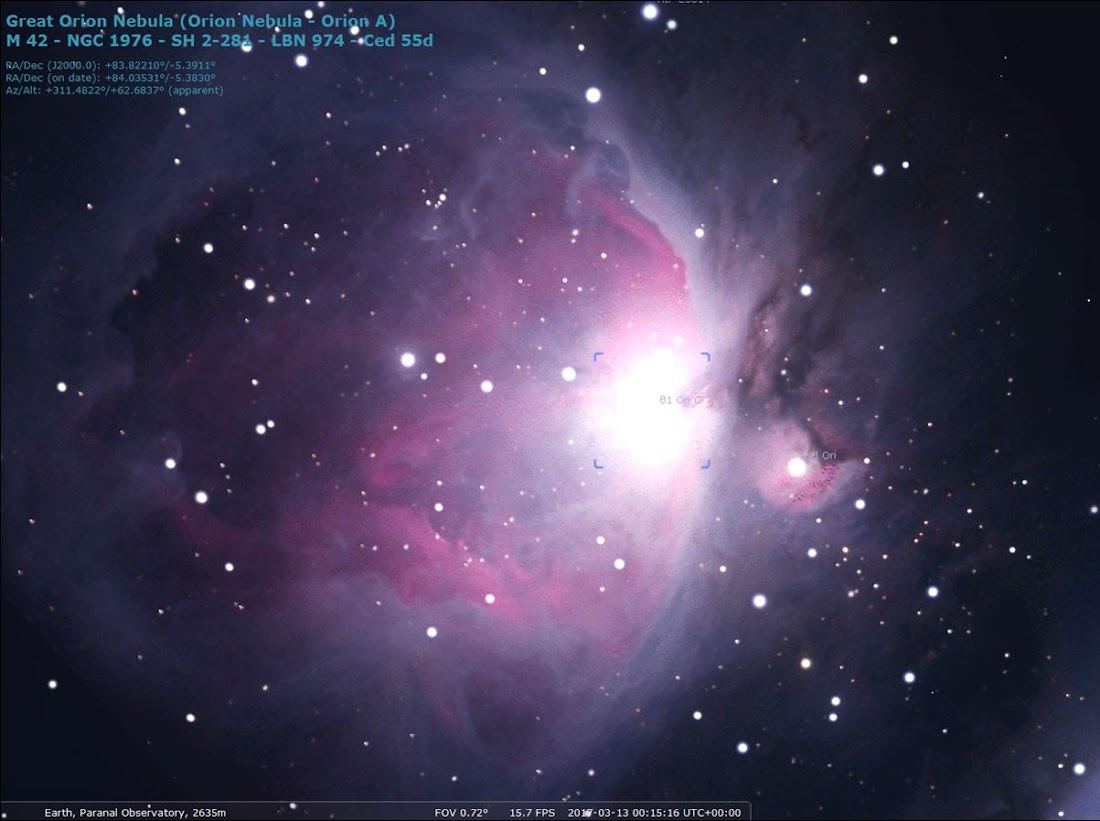 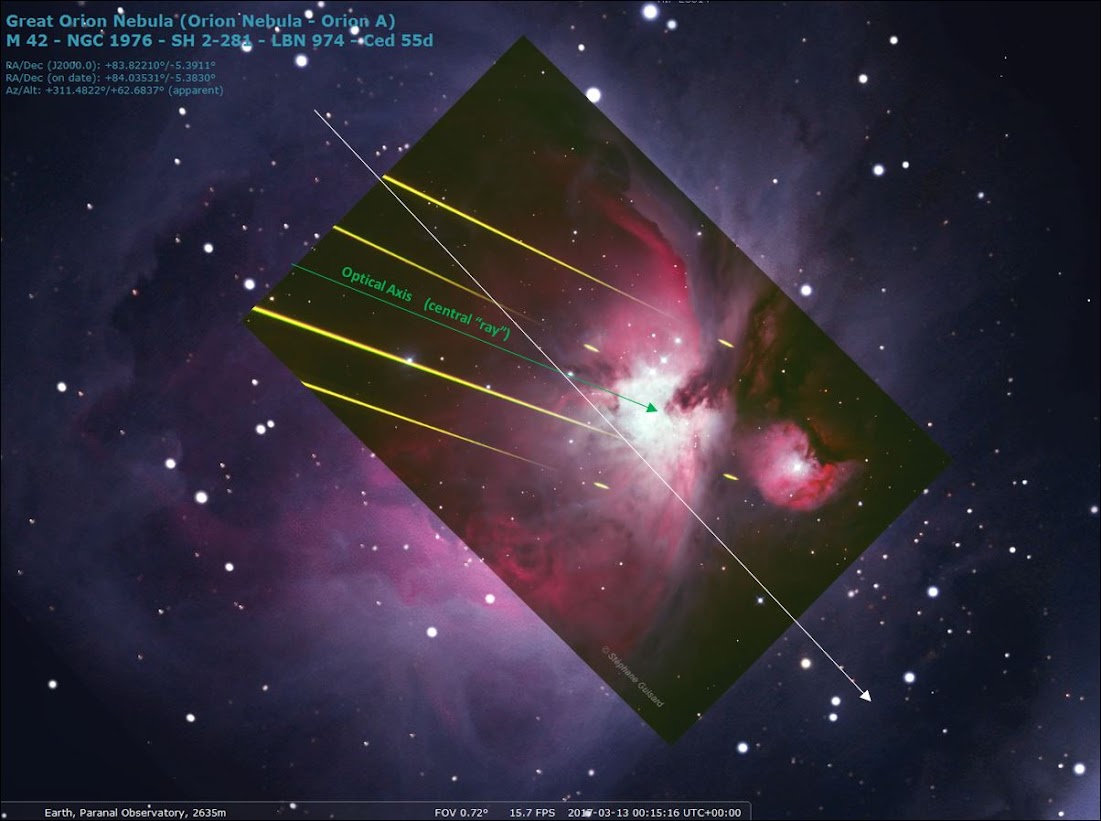 The green arrow in the overlay represents the telescope optical axis; the white arrow points to North. Empirically matching M42 orientation in the sky does not yield a unique solution - the laser beam angles in horizontal coordinates are confusing and totally confound a certifiable solution. However, I discovered a 2016 SPIE slide-deck presentation stating the 4LGS asterism is adjustable only radially, and it is a square locked to AZ/ALT horizontal coordinate axes. The presented APOD image shows a diamond shape, so clearly the image was rotated for aesthetic reasons; beams heading upward appear more normal than beams heading downward. But, I wasn't happy with relying on a constant square asterism so I did the trigonometry to solve for the projected angles in the APOD given the specific launch distance and reasonable height difference from the 50-cm telescope. Surprisingly, the calculated and actual slopes of beams agree within a few percent.

Next, the image time stamp says the creation date was 3/13. The solution does allow for this 3/13 date as the overlay image shows, but as I said isn't required - first light for the 4LGS was in April 2016. Lastly, I looked at two possible observatory locations: the one due north and the one almost due east. The eastward location does not agree at all where the calculate slopes differ by 50%. 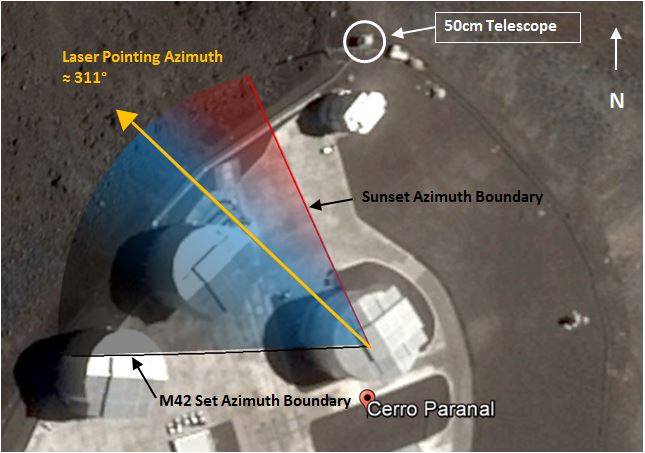 There is a second possible solution with the square asterism rotated another 90° but this also makes no sense. The northern location does agree with vendetta's statement that the 50-cm telescope is north of UT4. In Google image of the VLT site, I show the azimuth range for all possible M42 images on March 13. The azimuth limits are bounded by sunset and M42-set, with the laser heading also shown.

The solution holds together in all regards of consideration and calculation I could muster. I think I got it