Explanation: Sometimes, the sky mimics the ground. Taken in 2017 May from the Atacama Desert in Chile, the foreground of the featured image encompasses the dipping edge of the caldera of an extinct volcano. Poetically echoing the dip below is the arch of our Milky Way Galaxy above. Many famous icons dot this southern nighttime vista, including the center of our Milky Way Galaxy on the far left, the bright orange star Antares also on the left, the constellation of the Southern Cross near the top of the arch, and the red-glowing Gum Nebula on the far right. Just above the horizon and splitting two distant volcanic peaks near the image center is the Large Magellanic Cloud -- the largest satellite galaxy of the Milky Way.

Today's APOD is a beautiful portrait of our galaxy. The colors are great, and I particularly like the excellent portrait of the Hα regions. You can so easily tell which pink regions are bright and which are faint.

Another thing that is quite obvious from this picture is that the Milky Way appears to be relatively poor in star formation. The part of the Milky Way that we can see is not dominated by pink nebulas or bright blue star clusters in any way. It is thought that our galaxy is in the process of running out of gas. Of course, the contrast between our mostly yellowish Milky Way arching across the sky and the mostly bluish Large Magellanic Cloud peeking out between two volcanoes is striking. 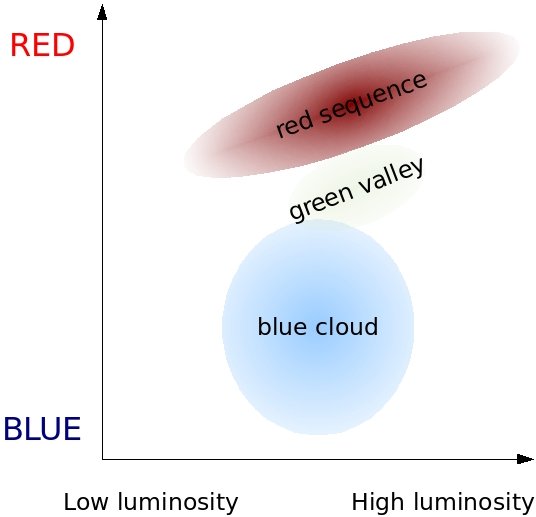 Illustration: Joshua Schroeder.
The galaxy color–magnitude diagram shows the relationship between absolute magnitude (a measure of luminosity) and mass of galaxies. A preliminary description of the three areas of this diagram was made in 2003 by Eric F. Bell et al. from the COMBO-17 survey[1] that clarified the bimodal distribution of red and blue galaxies as seen in analysis of Sloan Digital Sky Survey data[2] and even in de Vaucouleurs' 1961 analyses of galaxy morphology.[3] Noticed in this diagram are three main features: the red sequence, the green valley, and the blue cloud.

The red sequence includes most red galaxies which are generally elliptical galaxies. The blue cloud includes most blue galaxies which are generally spirals. In between the two distributions is an underpopulated space known as the green valley which includes a number of red spirals.
...
New research suggests the green valley is actually composed of two different populations of galaxies: one of late-type galaxies, where star formation has been quenched due to their gas supplies being shut off followed by exhaustion of their gas reservoirs for several billion years, and another of early-type galaxies where both the gas supplies and gas reservoirs have been destroyed very quickly, likely because of mergers with other galaxies and/or the presence of an active galactic nucleus.

The Milky Way and the Andromeda Galaxy are assumed to lie in the green valley because their star formation is slowing down due to running out of gas.

Within the explanation of this beautiful picture is a little mistake. I am pretty sure that Carlos Eduardo Fairbairn took this image at the Overo Maar ( 23° 31.098'S 67° 39.739'W). This Maar is NOT a caldera from an extinct volcano as there is/was no magma chamber below, but it was created in postglacial times by a single phreatomagmatic eruption! (https://en.wikipedia.org/wiki/Cerro_Overo)
The perfect cone of the stratovolcano in the middle belongs to Cerro Chiliques.
Best regards from Germany and keep on posting APODs! Great website!
Top

At the request of the astrophotographer, the link in the credit line was changed to their Instragram account.
Top

Nobody to remarks this "beautifull" picture is outrageously photoshoped ?
Have a look on the mountains : I have been there plenty of times, and never saw Andes volcanoes as steep as "Matterhorn" or "Eiger" there...
This "photographer" has compressed lateraly the picture to show mountains higher as they really are...
In one word : "bull s...t".
Serge Brunier
Top
7 posts • Page 1 of 1