Explanation: What created this unusual explosion? Three weeks ago, gravitational wave detectors in the USA and Europe -- the LIGO and Virgo detectors -- detected a burst of gravitational radiation that had the oscillating pattern expected when a black hole destroys a neutron star. One object in event S190814bv was best fit with a mass greater than five times the mass of the Sun -- making it a good candidate for a black hole, while the other object appeared to have a mass less than three times the mass of the Sun -- making it a good candidate for a neutron star. No similar event had been detected with gravitational waves before. Unfortunately, no light was seen from this explosion, light that might have been triggered by the disrupting neutron star. It is theoretically possible that the lower mass object was also a black hole, even though no clear example of a black hole with such a low mass is known. The featured video was created to illustrate a previously suspected black hole - neutron star collision detected in light in 2005, specifically gamma-rays from the burst GRB 050724. The animated video starts with a foreground neutron star orbiting a black hole surrounded by an accretion disk. The black hole's gravity then shreds the neutron star, creating a jet as debris falls into the black hole. S190814bv will continue to be researched, with clues about the nature of the objects involved possibly coming from future detections of similar systems.

Well, I hope the research bears this out...

Whatever, I'm glad I'm at a safe distance!

The event name was typed incorrectly. The name S190814sv has now been corrected to S190814bv on the main NASA APOD. I apologize for the oversight.
- RJN
Top

On a different note... 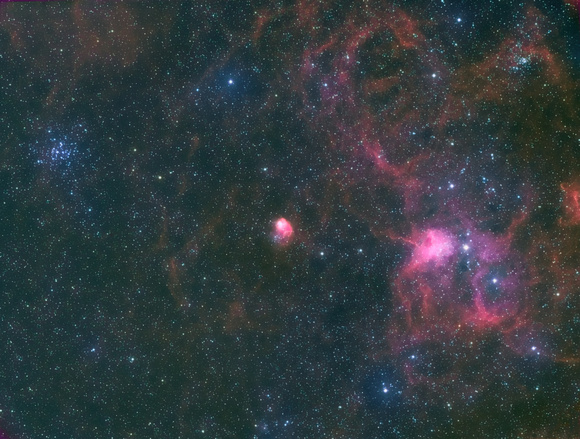 Edit: It appears that it is the Fly that was rewarded with the illustrious NGC designation while the Spider was stuck with the lowlier IC number.

viewtopic.php?t=39726
Know the quiet place within your heart and touch the rainbow of possibility; be
alive to the gentle breeze of communication, and please stop being such a jerk. — Garrison Keillor
Top