Explanation: This supernova shock wave plows through interstellar space at over 500,000 kilometers per hour. Near the middle and moving up in this sharply detailed color composite, thin, bright, braided filaments are actually long ripples in a cosmic sheet of glowing gas seen almost edge-on. Cataloged as NGC 2736, its elongated appearance suggests its popular name, the Pencil Nebula. The Pencil Nebula is about 5 light-years long and 800 light-years away, but represents only a small part of the Vela supernova remnant. The Vela remnant itself is around 100 light-years in diameter, the expanding debris cloud of a star that was seen to explode about 11,000 years ago. Initially, the shock wave was moving at millions of kilometers per hour but has slowed considerably, sweeping up surrounding interstellar material. In the featured narrow-band, wide field image, red and blue colors track, primarily, the characteristic glows of ionized hydrogen and oxygen atoms, respectively.

Beautiful; as APOD usually is!

Just wanted to thank APOD for all the amazing pictures and insights into Astronomy, astrophysics and humor and more. You bring me much joy and teach me something new everyday.
Top 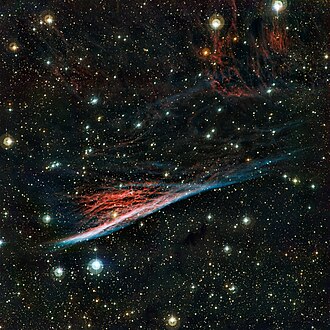 The Pencil Nebula, a strangely shaped leftover from a vast explosion The oddly shaped Pencil Nebula (NGC 2736) is pictured in this image from ESO’s La Silla Observatory in Chile. This nebula is a small part of a huge remnant left over after a supernova explosion that took place about 11 000 years ago.

<<Pencil, from Old French pincel, from Latin penicillus a "little tail" (see penis; pincellus is Latin from the post-classical period) originally referred to an artist's fine brush of camel hair, also used for writing before modern lead or chalk pencils. Though the archetypal pencil was an artist's brush, the stylus, a thin metal stick used for scratching in papyrus or wax tablets, was used extensively by the Romans and for palm-leaf manuscripts.

As a technique for drawing, the closest predecessor to the pencil was silverpoint until in 1565 (some sources say as early as 1500), a large deposit of graphite was discovered on the approach to Grey Knotts from the hamlet of Seathwaite in Borrowdale parish, Cumbria, England. This particular deposit of graphite was extremely pure and solid, and it could easily be sawn into sticks. It remains the only large-scale deposit of graphite ever found in this solid form. Chemistry was in its infancy and the substance was thought to be a form of lead. Consequently, it was called plumbago (Latin for "lead ore"). Because the pencil core is still referred to as "lead", or "a lead", many people have the misconception that the graphite in the pencil is lead, and the black core of pencils is still referred to as lead, even though it never contained the element lead. The words for pencil in German (Bleistift), Irish (peann luaidhe), Arabic (قلم رصاص qalam raṣāṣ), and some other languages literally mean lead pen.

The value of graphite would soon be realised to be enormous, mainly because it could be used to line the moulds for cannonballs; the mines were taken over by the Crown and were guarded. When sufficient stores of graphite had been accumulated, the mines were flooded to prevent theft until more was required. The usefulness of graphite for pencils was discovered as well, but graphite for pencils had to be smuggled. Because graphite is soft, it requires some form of encasement. Graphite sticks were initially wrapped in string or sheepskin for stability. England would enjoy a monopoly on the production of pencils until a method of reconstituting the graphite powder was found in 1662 in Italy. However, the distinctively square English pencils continued to be made with sticks cut from natural graphite into the 1860s.

Around 1560, an Italian couple named Simonio and Lyndiana Bernacotti made what are likely the first blueprints for the modern, wood-encased carpentry pencil. Their version was a flat, oval, more compact type of pencil. Their concept involved the hollowing out of a stick of juniper wood. Shortly thereafter, a superior technique was discovered: two wooden halves were carved, a graphite stick inserted, and the halves then glued together—essentially the same method in use to this day.>>

If this is a side-on view, does that mean all these other supernova remnants we see as circular aren’t actually spheres but more flattened circles?
Top

If this is a side-on view, does that mean all these other supernova remnants we see as circular aren’t actually spheres but more flattened circles?

Supernova remnant shapes are mostly defined by the local interstellar medium with which they collide:

Guest wrote: ↑
Wed Apr 14, 2021 5:57 pm
If this is a side-on view, does that mean all these other supernova remnants we see as circular aren’t actually spheres but more flattened circles?