M30
http://www.chart32.de/index.php/component/k2/item/167
Copyright: CHART32
Processing: Bernd Flach-Wilken
M30.jpg
You do not have the required permissions to view the files attached to this post.
Top 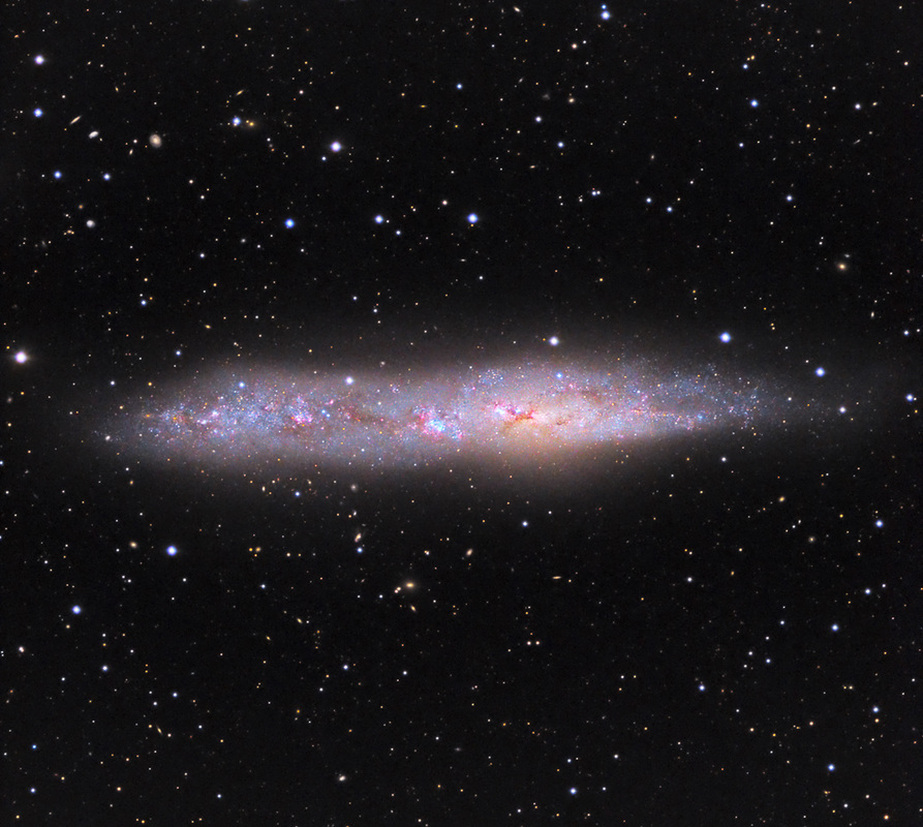 ESO: Venus and the Moon Strike a Pose

[img3="Credit: Petr Horálek / ESO"]https://cdn.eso.org/images/screen/potw1616a.jpg[/img3][hr][/hr]
As the Sun raises at Cerro Paranal, in Chile, filling the sky with superb orange shades, two members of the ESO Fulldome Expedition, Babak Tafreshi (left) and Yuri Beletsky (right), are preparing their tripods and cameras for the day ahead.

Above the silhouette of the Chilean mountains, the gentle smile of a crescent Moon and the bright planet Venus strike a pose for the cameras. Thanks to a phenomenon called earthshine, the entire disc of the Moon can be seen shining in light reflected off the Earth. The telescope in silhouette in front is an Auxiliary Telescope (AT), part of Very Large Telescope (VLT) at ESO's Paranal Observatory.

This twilight moment was captured by ESO Photo Ambassador Petr Horálek, while participating in the ESO Fulldome Expedition which is gathering spectacular images for use in the ESO Supernova Planetarium & Visitor Centre, currently under construction at ESO’s Headquarters in Garching (near Munich), Germany.

[img3="Credit: ESA/Hubble & NASA
Acknowledgement: Judy Schmidt"]http://cdn.spacetelescope.org/archives/ ... w1616a.jpg[/img3][hr][/hr]
The elegant simplicity of NGC 4111, seen here in this image from the NASA/ESA Hubble Space Telescope, hides a more violent history than you might think. NGC 4111 is a lenticular, or lens-shaped, galaxy, lying about 50 million light-years from us in the constellation of Canes Venatici (The Hunting Dogs).

Lenticular galaxies are an intermediate type of galaxy between an elliptical and a spiral. They host aged stars like ellipticals and have a disk like a spiral. However, that’s where the similarities end: they differ from ellipticals because they have a bulge and a thin disk, but are different from spirals because lenticular discs contain very little gas and dust, and do not feature the many-armed structure that is characteristic of spiral galaxies. In this image we see the disc of NGC 4111 edge-on, so it appears as a thin sliver of light on the sky.

At first sight, NGC 4111 looks like a fairly uneventful galaxy, but there are unusual features that suggest it is not such a peaceful place. Running through its centre, at right angles to the thin disc, is a series of filaments, silhouetted against the bright core of the galaxy. These are made of dust, and astronomers think they are associated with a ring of material encircling the galaxy’s core. Since it is not aligned with the galaxy’s main disc, it is possible that this polar ring of gas and dust is actually the remains of a smaller galaxy that was swallowed up by NGC 4111 long ago.

LBN 1022
http://www.tvdavisastropics.com/astroim ... 0000af.htm
Copyright: Thomas Davis
astroimages-1_i000128.jpg
You do not have the required permissions to view the files attached to this post.
Top

NGC 460
http://cosmicphotos.com/gallery/image.p ... lbum_id=11
Copyright: Jason Jennings
displayimage.php.jpg
You do not have the required permissions to view the files attached to this post.
Top

NGC 1788
http://www.atacama-photographic-observatory.com
Copyright: Thierry Demange, Richard Galli and Thomas Petit
ngc1788.jpg
You do not have the required permissions to view the files attached to this post.
Top


For the 26th birthday of NASA's Hubble Space Telescope, astronomers are highlighting a Hubble image of an enormous bubble being blown into space by a super-hot, massive star. The Hubble image of the Bubble Nebula, or NGC 7635, was chosen to mark the 26th anniversary of the launch of Hubble into Earth orbit by the STS-31 space shuttle crew on April 24, 1990. ...

[img3="Credit: NASA, ESA, and Hubble Heritage (STScI/AURA)"]http://heritage.stsci.edu/2016/13/images/p1613aw.jpg[/img3][hr][/hr]
The Bubble Nebula is 7 light-years across — about one-and-a-half times the distance from our sun to its nearest stellar neighbor, Alpha Centauri — and resides 7,100 light-years from Earth in the constellation Cassiopeia.

The seething star forming this nebula is 45 times more massive than our sun. Gas on the star gets so hot that it escapes away into space as a "stellar wind" moving at over 4 million miles per hour. This outflow sweeps up the cold, interstellar gas in front of it, forming the outer edge of the bubble much like a snowplow piles up snow in front of it as it moves forward.

As the surface of the bubble's shell expands outward, it slams into dense regions of cold gas on one side of the bubble. This asymmetry makes the star appear dramatically off-center from the bubble, with its location in the 10 o'clock position in the Hubble view.

Dense pillars of cool hydrogen gas laced with dust appear at the upper left of the picture, and more "fingers" can be seen nearly face-on, behind the translucent bubble.

The gases heated to varying temperatures emit different colors: oxygen is hot enough to emit blue light in the bubble near the star, while the cooler pillars are yellow from the combined light of hydrogen and nitrogen. The pillars are similar to the iconic columns in the "Pillars of Creation" in the Eagle Nebula. As seen with the structures in the Eagle Nebula, the Bubble Nebula pillars are being illuminated by the strong ultraviolet radiation from the brilliant star inside the bubble. ...

Hubblecast 92: 26th Anniversary
Know the quiet place within your heart and touch the rainbow of possibility; be
alive to the gentle breeze of communication, and please stop being such a jerk. — Garrison Keillor
Top NGC 289
http://www.pbase.com/strongmanmike2002/ngc_289
Copyright: Michael Sidonio
157675863.Vi8qbYq8.jpg
You do not have the required permissions to view the files attached to this post.
Top


Astronomers have discovered a new satellite orbiting the main belt asteroid (130) Elektra — the smallest object visible in this image. The team, led by Bin Yang (ESO, Santiago, Chile), imaged it using the extreme adaptive optics instrument, SPHERE, installed on the Unit Telescope 3 of ESO’s Very Large Telescope at Cerro Paranal, Chile. This new, second moonlet of (130) Elektra is about 2 kilometres across and has been provisionally named S/2014 (130) 1, making (130) Elektra a triple system. Exploiting the unprecedented sensitivity and spatial resolution of the instrument SPHERE, the team also observed another triple asteroid system in the main belt, (93) Minerva.

[img3="Image Credit: Yang/ESO"]https://cdn.eso.org/images/screen/potw1617a.jpg[/img3][hr][/hr]
Asteroids are the relics of the building blocks that formed the terrestrial planets in the early days of the Solar System. Studying asteroids with multiple satellites is of crucial importance because their formation mechanisms can provide information about planet formation and evolution that cannot be revealed by other methods.

Using the data gathered with SPHERE the team inferred that both (130) Elektra and (93) Minerva were created in an erosive impact. As a result of the collision substantial chunks of matter can break away into space to form small satellites of one of the original bodies. In this case the small separation of the satellites from their larger parent asteroids, the large mass ratios between the moonlets and the primaries and the same composition between moonlets and primaries support this theory.


Extreme AO Observations of Two Triple Asteroid Systems with SPHERE - B. Yang et al
Know the quiet place within your heart and touch the rainbow of possibility; be
alive to the gentle breeze of communication, and please stop being such a jerk. — Garrison Keillor
Top

NGC 339 is part of the Small Magellanic Cloud (SMC), a dwarf galaxy that lies around 200 000 light-years away from us. Along with our own galaxy, the Milky Way, the SMC is one of a collection of neighbouring galaxies known as the Local Group.

By measuring the brightnesses and colours of the stars of NGC 339, astronomers were able to estimate the overall age of the cluster — a method that places NGC 339 at around 6.5 billion years old. This makes it only half the age of the more common globular clusters. The relationship between massive intermediate age star clusters, such as NGC 339, and the true globular clusters are not fully understood yet. So far none of these type of clusters has been found in the Milky Way.

In this very detailed image, it is also possible to see a number of galaxies. They appear as fuzzy, extended blobs, contrasting with the sharp stars that make up NGC 339. Most obvious here are two elliptical galaxies, one towards the top left of the image and another in the centre right. These galaxies are not associated with NGC 339 but lie far in the background, across the vast expanse of the cosmos.

Abell 33
http://www.pbase.com/dsantiago/image/162741305
Copyright: Derek Santiago
162741305.1WWi9chR.jpg
You do not have the required permissions to view the files attached to this post.
Top

M71
http://bine-und-franz.de/astrophoto/obj ... _h_c11.htm
Copyright: Franz Hofmann
m071.jpg
You do not have the required permissions to view the files attached to this post.
Top

RCW 7
http://cosmicphotos.com/gallery/image.p ... lbum_id=11
Copyright: Jason Jennings
displayimage.php.jpg
You do not have the required permissions to view the files attached to this post.
Top

polakis_hubble_variable_nebula.gif
You do not have the required permissions to view the files attached to this post.
Just call me "geck" because "zilla" is like a last name.
Top
47 posts