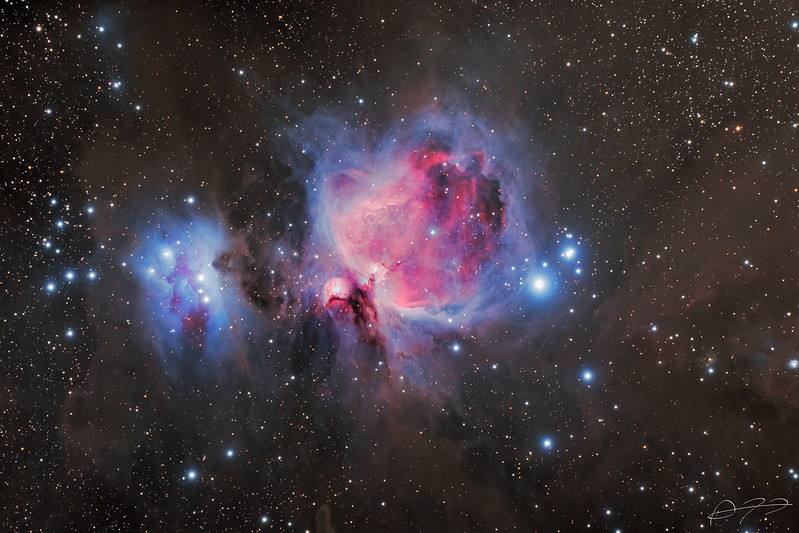 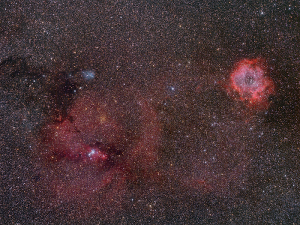 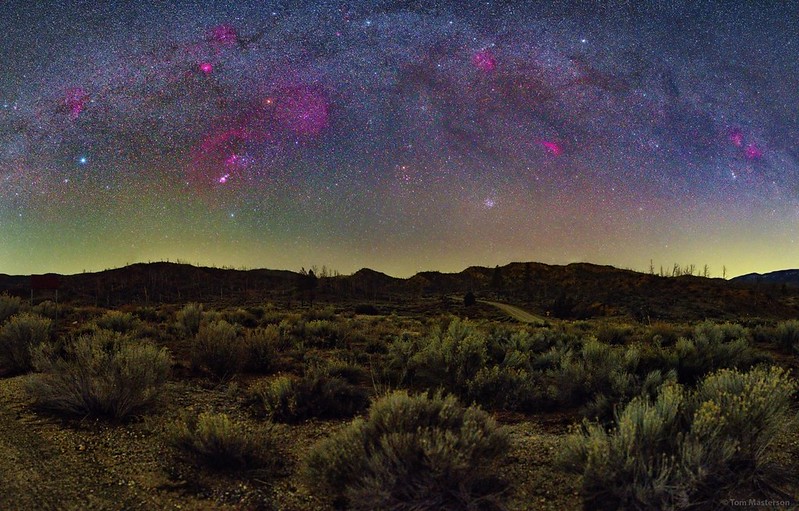 New Zealand is one of the best and safe places to enjoy the Milkyway rising. In the image is the milkyway rising behind Mt. Tarawera looking over Lake Tarawera. This place once used to be home to the famous (even known as 8th wonder of the world) Pink and White Terraces, which was unfortunately destroyed in 1886 Eruption of Mt. Tarawera.

Simeis 147 - Sh-2-240
Together have 4 astrophotographers exposed for 120 hours. Equipped with the same optics (200 mm lens) was exposed
in H-alpha, OIII and RGB. The authors come from the West of Germany, the region of Niederrhein (Lower Rhine). We trod the light pollution. The autors are Ralf Kreuels, Michael Kunze, Stephan Küppers, Mark Schocke - http://www.astrofototeam-niederrhein.de 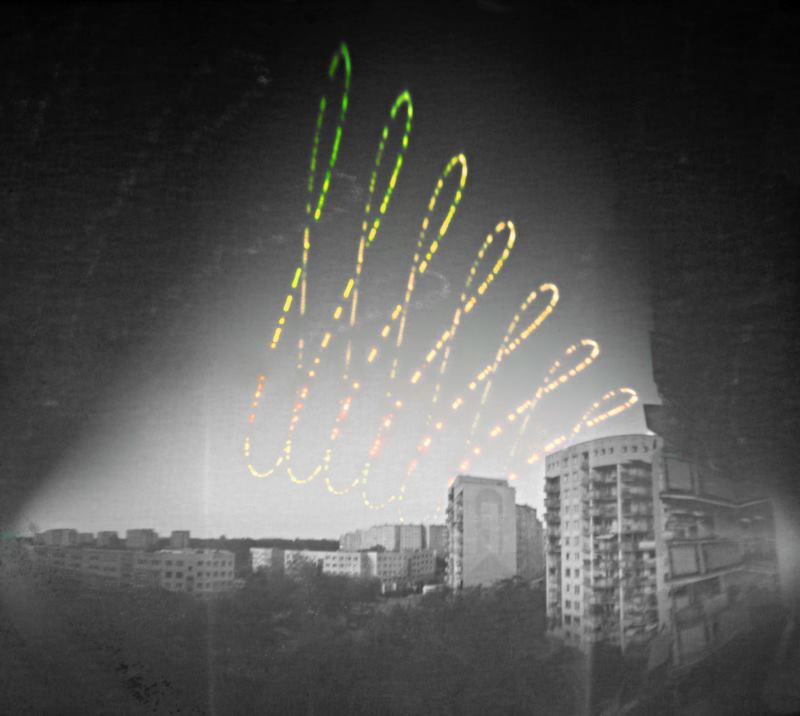 Messier 94 (also known as NGC 4736) is a spiral galaxy in the constellation Canes Venatici. It was discovered by Pierre Méchain in 1781, and catalogued by Charles Messier two days later. Although some references describe M94 as a barred spiral galaxy, the "bar" structure appears to be more oval-shaped. The galaxy has two ring structures

M94 contains both an inner ring with a diameter of 70 arcseconds and an outer ring with a diameter of 600 arcseconds. These rings appear to form at resonance locations within the disk of the galaxy. The inner ring is the site of strong star formation activity and is sometimes referred to as a starburst ring. This star formation is fueled by gas that is dynamically driven into the ring by the inner oval-shaped bar-like structure.

A 2009 study conducted by an international team of astrophysicists revealed that the outer ring of M94 is not a closed stellar ring, as historically attributed in the literature, but a complex structure of spiral arms when viewed in mid-IR and UV. The study found that the outer disk of this galaxy is active. It contains approximately 23% of the galaxy's total stellar mass and contributes about 10% of the galaxy's new stars. In fact, the star formation rate of the outer disk is approximately two times greater than the inner disk because it is more efficient per unit of stellar mass.

There are several possible external events that could have led to the origin of M94's outer disk including the accretion of a satellite galaxy or the gravitational interaction with a nearby star system. However, further research found problems with each of these scenarios. Therefore, the report concludes that the inner disk of M94 is an oval distortion which led to the creation of this galaxy's peripheral disk.

The estimated average distance to M94 is estimated of 16.0 ± 1.3 Mly (4.9 ± 0.4 Mpc). In total the galaxy spans 11.2 x 9.2 arc minutes of apparent sky, which corresponds to a spatial diameter of 50,000 light-years. It's estimated to contain about 40 billion stars. The galaxy is best seen from the Northern Hemisphere during the months of March, April or May.

M94 is one of the brightest galaxies within the M94 Group, a group of galaxies that contains between 16 and 24 galaxies. This group is one of many that lies within the Virgo Supercluster (i.e. the Local Supercluster). Although a large number of galaxies may be associated with M94, only a few galaxies near M94 appear to form a gravitationally bound system. Most of the other nearby galaxies appears to be moving with the expansion of the universe.

M94 is a nice spiral galaxy located in the constellation of Canes Venatici. It's also known as the Cats Eye Galaxy or the Crocs Eye Galaxy due to its stunning eye-like resemblance. With an apparent magnitude of +8.5, it's a difficult binocular object requiring dark skies and good transparency; at best appearing as only a small faint hazy patch of light. 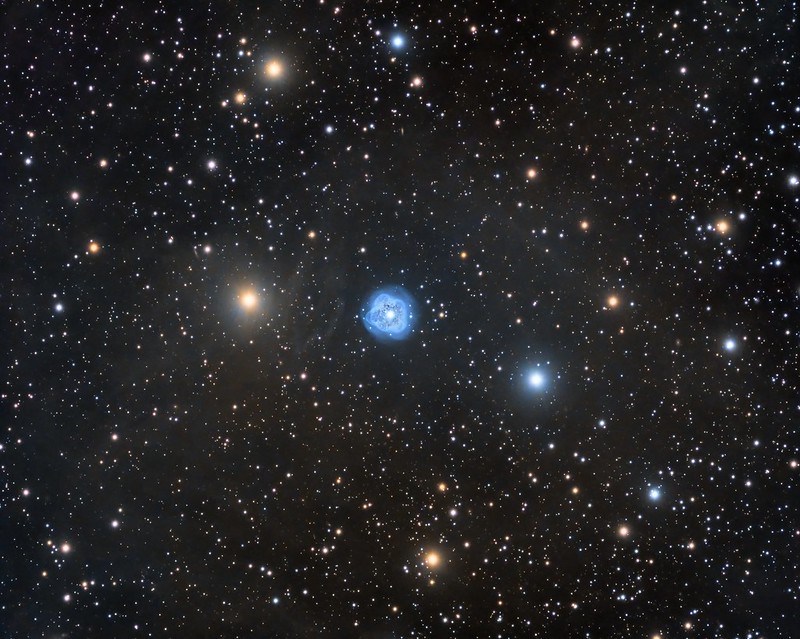 A surreal result of pursuing 'advanced' plate solving using astronomical databases of fainter magnitude stars via Pixinsight. This single 3 min image of the Running Chicken nebula, IC2944, using low gain (75) with the ASI1600 astro camera and Takahashi E-130D astrograph. PPMXL catalog of stars used. There are over 32,000 labels in this picture, download at high resolution and zoom in to see the identifiers.

See the Flickr link https://flic.kr/p/SxCyJL for a high resolution version 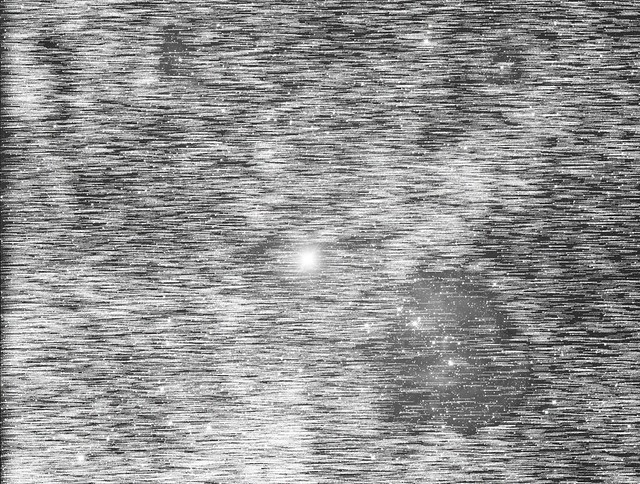 A picture is worth over a thousand words? by Simon W, on Flickr
Top

michael_kunze wrote:Simeis 147 - Sh-2-240
Together have 4 astrophotographers exposed for 120 hours. Equipped with the same optics (200 mm lens) was exposed
in H-alpha, OIII and RGB. The authors come from the West of Germany, the region of Niederrhein (Lower Rhine). We trod the light pollution. The autors are Ralf Kreuels, Michael Kunze, Stephan Küppers, Mark Schocke - http://www.astrofototeam-niederrhein.de

I have never seen an image that shows the OIII associated with this supernova remnant so well!

We truly live in a golden age of astrophotography!
Top

The top one telescope is the 1m installed by NASA to map moon during the 60 (Apollo Mission forecast)
The one at 1oclock is the solar coronograph Climso telescope.
Orange light is light pollution and bottom white light is zodiacal light

White trails are groomers lights. La Mongie ski resort is on the left part of the picture (light purple)
The big light in the middle is the famous Col du Tourmalet (Tour de France cycling bike run).
Took from the Pic du Midi Observatory
You can see the full Timelapse at https://www.youtube.com/watch?v=mL8iq1hzX9k
Top

A Young Open Cluster in a Nebulous Complex

NGC 4565 is a giant spiral galaxy more luminous than the Andromeda Galaxy. Much speculation exists in the literature as to the nature of the central bulge. In the absence of clear-cut dynamical data on the motions of stars in the bulge, the photometric data alone cannot adjudge among various options put forth. However, its exponential shape suggested that it is a barred spiral galaxy. Stars Above Mount Etna, Unesco World Heritage Site, during March 2017 eruption under the Moon light. Red glares can be seen over the top craters and lava descenting the mountain on the right side. The smoke from the top is enlighted by the lights of Catania, Sicily, Italy.
Top
144 posts