Explanation: What has happened to Saturn's moon Iapetus? Vast sections of this strange world are dark as coal, while others are as bright as ice. The composition of the dark material is unknown, but infrared spectra indicate that it possibly contains some dark form of carbon. Iapetus also has an unusual equatorial ridge that makes it appear like a walnut. To help better understand this seemingly painted moon, NASA directed the robotic Cassini spacecraft orbiting Saturn to swoop within 2,000 kilometers in 2007. Pictured here, from about 75,000 kilometers out, Cassini's trajectory allowed unprecedented imaging of the hemisphere of Iapetus that is always trailing. A huge impact crater seen in the south spans a tremendous 450 kilometers and appears superposed on an older crater of similar size. The dark material is seen increasingly coating the easternmost part of Iapetus, darkening craters and highlands alike. Close inspection indicates that the dark coating typically faces the moon's equator and is less than a meter thick. A leading hypothesis is that the dark material is mostly dirt leftover when relatively warm but dirty ice sublimates. An initial coating of dark material may have been effectively painted on by the accretion of meteor-liberated debris from other moons.

Looking closely on the white side, right in the middle, I see a tall thin black, building? My God it's full of stars!

Close inspection indicates that the dark coating is most concentrated at the moon's equator...
Art Neuendorffer
Top

The difference in colouring between the two Iapetian hemispheres is striking. The leading hemisphere and sides are dark (albedo 0.03–0.05) with a slight reddish-brown coloring, while most of the trailing hemisphere and poles are bright (albedo 0.5–0.6, almost as bright as Europa). The dark material is a very thin layer, only a few tens of centimeters thick at least in some areas, according to Cassini radar imaging and the fact that very small meteor impacts have punched through to the ice underneath. The initial dark material is thought to have been debris blasted by meteors off small outer moons in retrograde orbits and swept up by the leading hemisphere of Iapetus, but now it consists principally of lag from the sublimation of ice from the warmer areas of Iapetus's surface. It contains organic compounds similar to the substances found in primitive meteorites or on the surfaces of comets; Earth-based observations have shown it to be carbonaceous, and it probably includes cyano-compounds such as frozen hydrogen cyanide polymers.>>

I find Tom Van Flandern's answer MOST interesting. The dark material is debris from an exploded planet. While not generally accepted, yet, I am not aware of its falsification. If we have proof it cannot be from such, has that been published?
Top 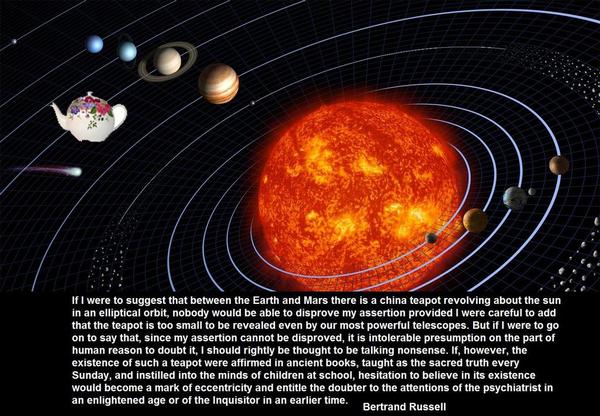 Matt Terry wrote: ↑Thu Jun 07, 2018 11:15 am
I find Tom Van Flandern's answer MOST interesting. The dark material is debris from an exploded planet. While not generally accepted, yet, I am not aware of its falsification.

If we have proof it cannot be from such, has that been published?

Why would the planet explode?

Why would it affect only Iapetus?

Perhaps it is a tea stain.
Art Neuendorffer
Top

Maybe it was an unstable planet that was destroyed by Dark Star.
Chris