Explanation: Beautiful spiral galaxy NGC 6744 is nearly 175,000 light-years across, larger than our own Milky Way. It lies some 30 million light-years distant in the southern constellation Pavo and appears as only a faint, extended object in small telescopes. We see the disk of the nearby island universe tilted towards our line of sight. This remarkably detailed galaxy portrait covers an area about the angular size of the full moon. In it, the giant galaxy's elongated yellowish core is dominated by the light from old, cool stars. Beyond the core, grand spiral arms are filled with young blue star clusters and speckled with pinkish star forming regions. An extended arm sweeps past a smaller satellite galaxy at the upper left. NGC 6744's galactic companion is reminiscent of the Milky Way's satellite galaxy the Large Magellanic Cloud.

It almost look like it is bleeding off material from the satellite galaxy, but that is probably perspective... but I think there have been many mergers... and another in the distant future...

Today's APOD loks great, and I very much admire the detailed portrait of the huge spiral-shaped disk. Actually, I'd say that the spiral system is not very well defined, so that the disk can be described as almost flocculent instead. NGC 4414 is an example of a flocculent galaxy.

Although NGC 6744 looks great in Martin Pugh's image, it looks quite different in the 1981 UBV picture by James D Wray. Wray did not "tweak" the brightness of different parts of the galaxy, and as a result, the bright parts of the galaxy look bright and the faint parts look faint. Consequently, in James D Wray's image, NGC 6744 looks like a yellow bar, surrounded by some scattered faint blue knots. Admittedly we can just barely make out some spiral features as well. 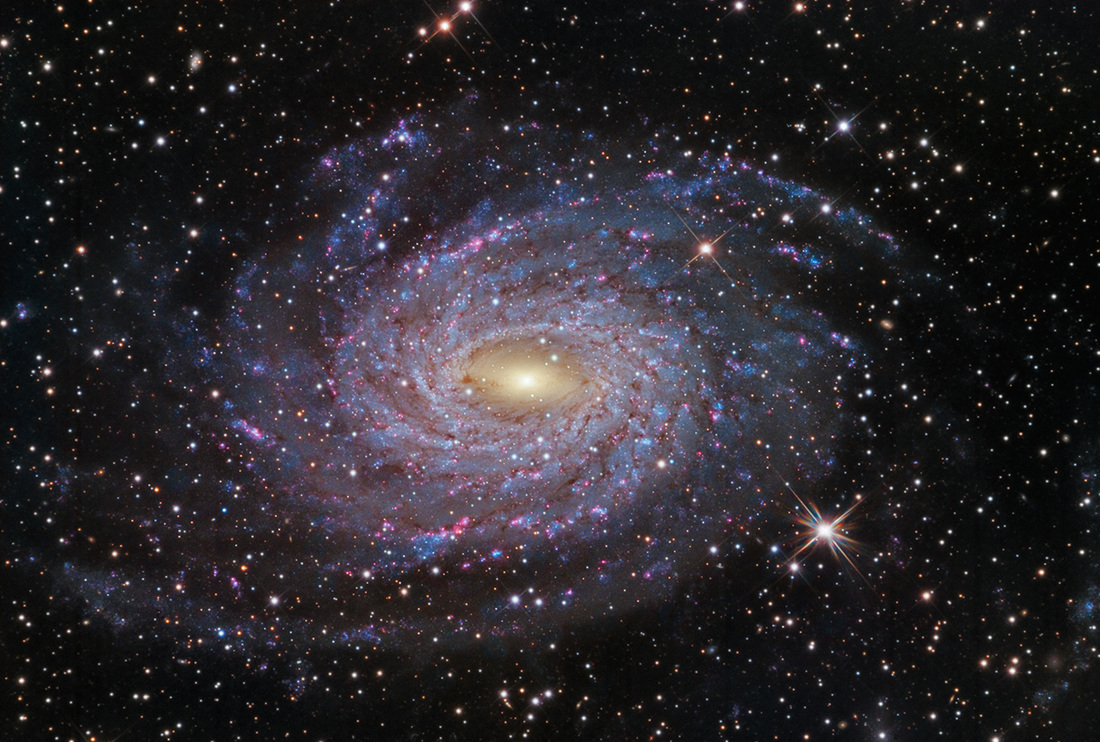 
It is interesting to compare NGC 6744 with well-known galaxy M101. Both galaxies are huge, with a huge spiral pattern surrounding a comparatively small yellow bulge or bar. Both look somewhat similar in James D Wray's atlas: Both sport a smallish yellow center surrounded by widely scattered blue blobs, far more prominent in M101 than in NGC 6744, though. Both galaxies are relatively nearby in view of the fact that they don't belong to the Local Group: NGC 6744 is at a distance of some 30 million light-years, considerably closer than the Virgo Cluster, and M101 is 21 million light-years away according to Wikipedia. Also according to Wikipedia, the disk of M101 is ~170,000 ly in diameter, which is gargantuan indeed.

So, Art, or some other math whiz, which galaxy is the intrinsically brightest? NGC 6744 or M101?

We call them galaxies, but what they really are are domains of angular momentum that segregated as the universe expanded.
Top

This makes M101 intrinsically brighter from the angle we view it
but NGC 6744 might be brighter if it were viewed perpendicularly.
Art Neuendorffer
Top

Think of sewage, swirling as it is about to go down the drain. But here there is no drain. That's our universe!
Well, except for us!
Top

Think of sewage, swirling as it is about to go down the drain. But here there is no drain. That's our universe!
Well, except for us!

Well, there is a drain in most galaxies, except it doesn't work too well as a drain. It's the central black hole, of course!