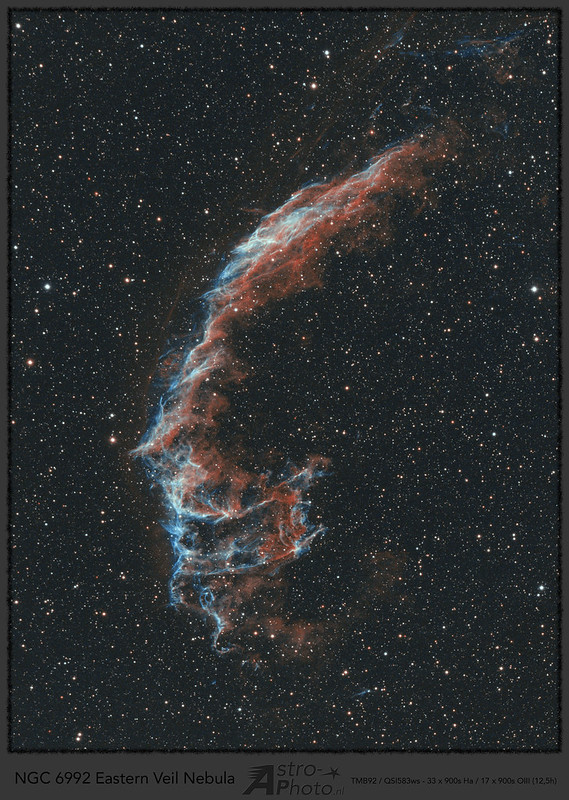 this photo is made with a canon1300d and 8mm peleng.
It is a panoramic of 6 photos taken in my garden.
Each photo is the result of a startrails of 700 images. 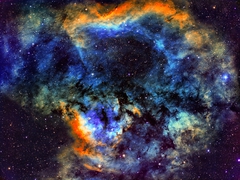 NGC7822 is the designation given to young star forming complex (Berkeley 59) in the constellation Cepheus, whose surrounding environment has a distinctive skull-like appearance. The emission nebula (core region) is Sharpless 171 aka Cederalbad 214 and the wider field object with the loop/ear-like structure consists of both NGC7822 and the cluster of stars to the upper right that look like little white flecks of paint is NGC7762 (the ear within the ear). There is more to this nebula that goes down below and fleshes out the skeleton shape, but obviously doesn't fit within my FOV.

The emission nebula contains examples of objects known a "pillars of creation", active star forming regions that use the material in the nebula to shape the overall structures until there is no more raw material left creating a cavity in the middle (which is why some of these nebulae may start to look the same). The region is 3000 light years away, so it probably is still active. The field of view spans over 40 light years. The region also contains a supernova remnant somewhere (G118.3+0.48).


As always, thanks for looking!


Best regards
Michael
You do not have the required permissions to view the files attached to this post.
Top

After months of cloudy nights the equinox brought a clear sky on a moonless night, just in time for one of my favorites shots in Bariloche: the Milky Way over the Andes. With the lucky bonus of the glare of zodiacal light behind Cerro Capilla.
You do not have the required permissions to view the files attached to this post.
Top

NGC 6822 Barnard's Galaxy
NGC6822_FINAL3_STARSHIP.jpg
https://www.astrobin.com/k00a85/?nc=collection&nce=1278
Copyright: Theodore Arampatzoglou
You do not have the required permissions to view the files attached to this post.
Top 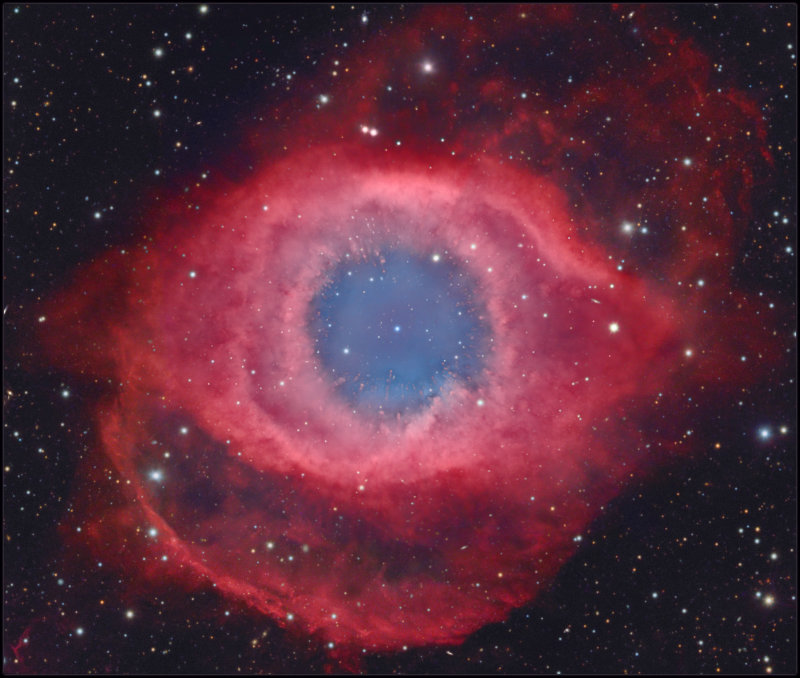 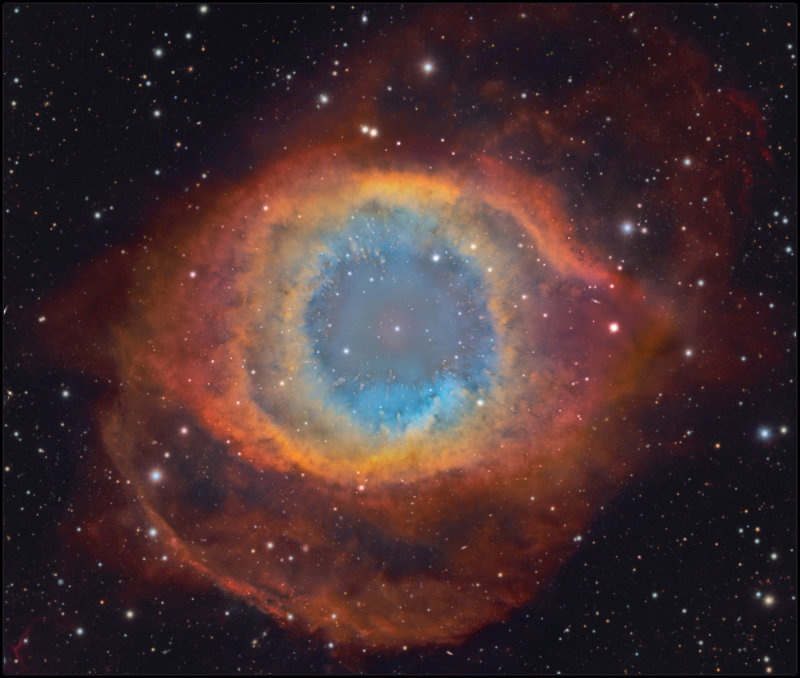 
And side by side:

Image at about 20 degrees latitude, with sombrero, losing many details, but I share with you my first image of this galaxy.

Sombrero is 28 million light-years away, due to his hat appearance. 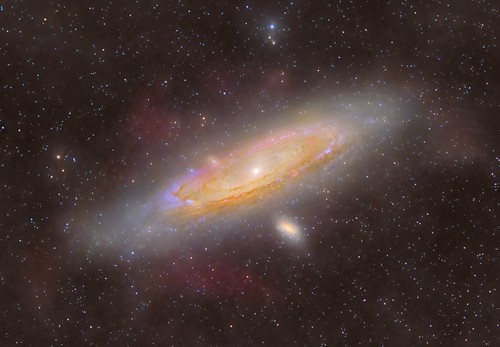 M31 with Ha and IFN by Onejoshsmith, on Flickr

NGC 253 - The Sculptor Galaxy
Copyright Lee Borsboom
Full res here
You do not have the required permissions to view the files attached to this post.
Top

The star forming regions of the Small Magellanic Cloud, with globular clusters 47 Tucanae and NGC 362 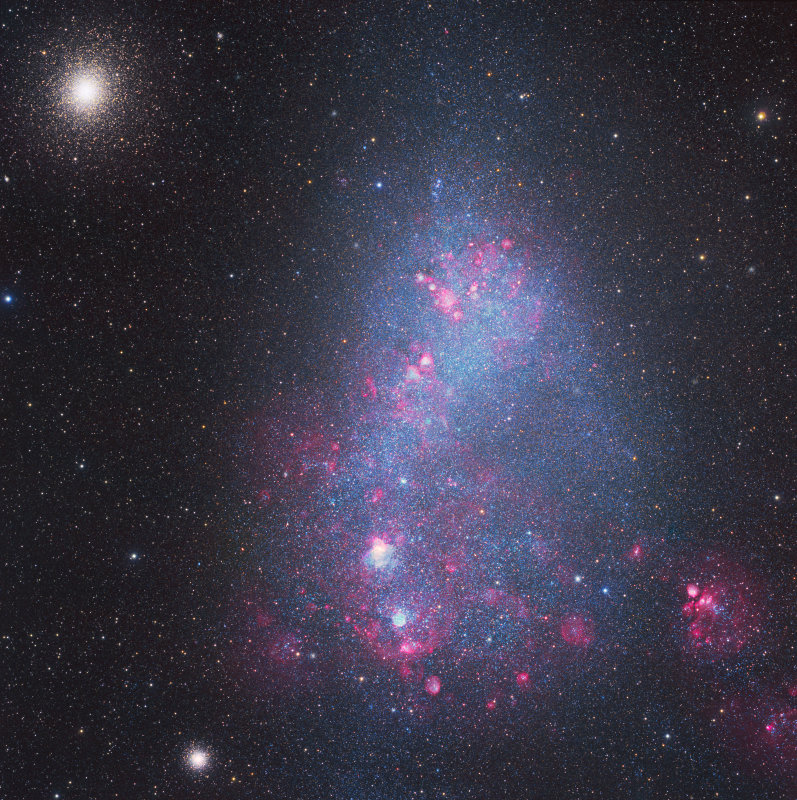 A red cocoon in a ocean of stars
https://www.bastienfoucher.com
Copyright: Bastien Foucher 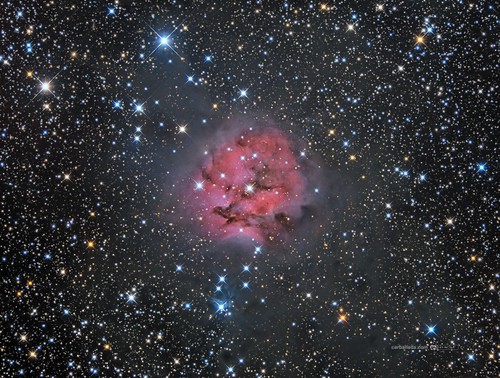 Close to 30 hours of integration time, taken with my amateur equipment, under one of the best skies in Europe! (Àger, Catalonia, Spain)
It's another good example about how important is the light pollution and how far you have to go to the big cities (Barcelona is about 200km away in this case) to take good pictures or just observe on a nice night sky.

IC 5146 (the Cocoon Nebula) is a reflection/emission nebula in the constellation Cygnus. The cluster is about 4,000 ly away, and the central star that lights it formed about 100,000 years ago; the nebula is about 12 arcmins across, which is equivalent to a span of 15 light years. 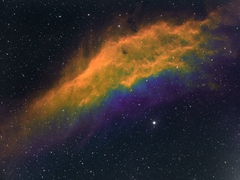 Alternate version with more yellow instead of golden tones: https://www.astrobin.com/m4znjp/C/

The nebula, so named due to its shape resembling the current borders of the state of California, lies at about a distance of ~1300 light years from Earth located in the constellation Perseus. Coincidentally, it transits with its zenith in central California, since the latitude matches its declination. Its width is just a bit under that of the diametre of the moon when viewed from Earth (~ half a degree), but its length however is 2.4 degrees, roughly five times that of the moon's apparent diametre.

The bright star close to the centre is Xi Persei aka Menkib which is primarily responsible for exciting the gases in the nebula and its resulting fluorescence, apparently due to ionising hydrogen beta radiation (which isn't one of the emission lines being measured by my filters, cf. the Balmer series).

The image as you see it consists mostly of Ha and S2 data. There is some O3 signal that is very faint but I did manage to pull it out. These images are minimally processed. I spent some time doing sophisticated processing but it went nowhere, whereas this is a simple linear combination of the three filters' light frames, followed by stretching and colour manipulation of the combined image in PixInsight to roughly match its namesake's colours (again, no Photoshop CC this time), and that's it!

Lurking in the background of the image are galaxies IC2005 and IC2027, which are magnitude 16 galaxies. The latter is visible at the top left if you look very closely. The former is in the top left quadrant, apparently behind the nebula.

I think this nebula is sometimes called the Elvis Presley nebula, but I might be wrong. I think I can see a dancing man in those red filaments. Anyway, the culprit behind it all, the ionizing star, is one of my favorite stars, 10 Lacerta, an O9V star. It is almost square in the middle of your picture. Go, 10 Lac!

I also like the dust-brown cosmic "caterpillar" at upper right!

This is two years old, but a video was posted recently on Facebook as "mysterious" It isn't, it's the twilight launch of a Falcon 9 in 2017.
But the appearance, especially the expansion of the smoke trail into a structured dome like sahpe,, and the smoke rings ejected by something that fell off, make me forgive anyone who didn't know what it was from wondering.

There are several videos online of the launch that show this "mystery". Would one be a good APOD, with discussion of the evolution of the plume?


Luigi Fiorentino
You do not have the required permissions to view the files attached to this post.
Top


That's a brilliant photo! Thank you!

There are two little elongated objects in the upper right corner. Could they be distant background galaxies (naah, not sufficiently red for that, I suppose), or could they be little baby stars having outbursts?

Good eye Ann! If I view the image before I applied Star Shrink, they do look like galaxies. Star Shrink narrowed them.
Top
100 posts