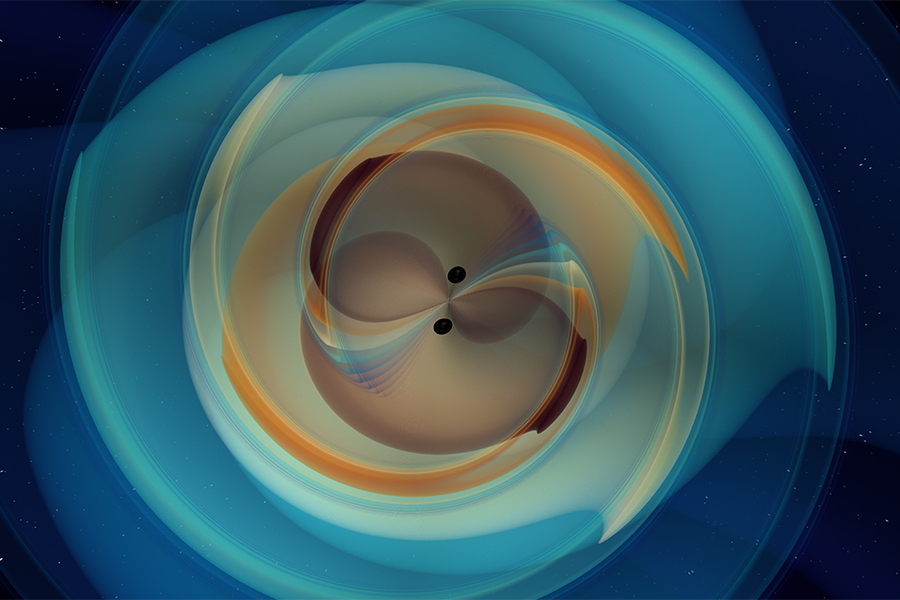 A still image from a numerical simulation of two black holes that inspiral and merge, emitting gravitational waves. The black holes have large and nearly equal masses, with one only 3% more massive than the other. The simulated gravitational wave signal is consistent with the GW190521 observation made by the LIGO and Virgo. (Credit: N. Fischer, H. Pfeiffer, A. Buonanno (AEI), SXS Collaboration)

For all its vast emptiness, the universe is humming with activity in the form of gravitational waves. Produced by extreme astrophysical phenomena, these reverberations ripple forth and shake the fabric of space-time, like the clang of a cosmic bell.

Now researchers have detected a signal from what may be the most massive black hole merger yet observed in gravitational waves. The product of the merger is the first clear detection of an “intermediate-mass” black hole, with a mass between 100 and 1,000 times that of the Sun.

They detected the signal, which they have labeled GW190521, on May 21, 2019, with the National Science Foundation’s Laser Interferometer Gravitational-wave Observatory (LIGO), a pair of identical, 4-kilometer-long interferometers in the United States; and Virgo, a 3-kilometer-long detector in Italy.

The signal, resembling about four short wiggles, is extremely brief in duration, lasting less than one-tenth of a second. From what the researchers can tell, GW190521 was generated by a source that is roughly 5 gigaparsecs away, when the universe was about half its age, making it one of the most distant gravitational-wave sources detected so far.

As for what produced this signal, based on a powerful suite of state-of-the-art computational and modeling tools, scientists think that GW190521 was most likely generated by a binary black hole merger with unusual properties.

Almost every confirmed gravitational-wave signal to date has been from a binary merger, either between two black holes or two neutron stars. This newest merger appears to be the most massive yet, involving two inspiraling black holes with masses about 85 and 66 times the mass of the Sun.

The LIGO-Virgo team has also measured each black hole’s spin and discovered that as the black holes were circling ever closer together, they could have been spinning about their own axes, at angles that were out of alignment with the axis of their orbit. The black holes’ misaligned spins likely caused their orbits to wobble, or “precess,” as the two Goliaths spiraled toward each other.

The new signal likely represents the instant that the two black holes merged. The merger created an even more massive black hole, of about 142 solar masses, and released an enormous amount of energy, equivalent to around 8 solar masses, spread across the universe in the form of gravitational waves. ...

GW190521: A Binary Black Hole Merger with a Total Mass of 150 M⊙ ~ LIGO, Virgo, R. Abbott et al Properties and Astrophysical Implications of the
150 M⊙ Binary Black Hole Merger GW190521 ~ LIGO, Virgo, R. Abbott et al
viewtopic.php?t=40714
Last edited by bystander on Thu Sep 03, 2020 3:46 pm, edited 1 time in total.
Know the quiet place within your heart and touch the rainbow of possibility; be
alive to the gentle breeze of communication, and please stop being such a jerk. — Garrison Keillor
Top

Click to play embedded YouTube video.
<<GW190521 is a gravitational wave signal observed by the LIGO and Virgo detectors on 21 May 2019 at 03:02:29 UTC. The event was caused by the merger of a 66 M☉ black hole with an 85 M☉ black hole resulting in a 140 M☉ black hole. GW190521, is the first observed intermediate mass black hole. located 12.8 billion light years away, in location area 765 deg2 towards Coma Berenices, Canes Venatici, or Phoenix.

In June 2020, astronomers, using the Zwicky Transient Facility (ZTF) located at Palomar Observatory near California, reported observational details, loosely-associated with the GW190521g trigger, of the merging of two black holes, within the vicinity of a very large third black hole, that, uncharacteristically, emitted a flash of light. If true, the event is claimed to be the first-ever light flare observed in the merger of two black holes by astronomers. Mergers of black holes do not typically emit any light whatsoever. Researchers think a unique event occurred with the three black holes: the third larger supermassive black hole may have affected the merging of the two smaller black holes, sending the newly formed black hole hurtling through the related accretion disk, disrupting the disk material and producing a flare of light. The newly formed black hole was 100 times the mass of the sun and traveled at 200 km/s through the disk, according to the astronomers.

According to Matthew Graham, lead astronomer for the study, “This supermassive black hole was burbling along for years before this more abrupt flare. The flare occurred on the right timescale, and in the right location, to be coincident with the gravitational-wave event. In our study, we conclude that the flare is likely the result of a black hole merger, but we cannot completely rule out other possibilities.”

The astronomers predict a repeat flare of light in this source, due to a re-encountering with the related accretion disk, in about 1.6 years. If the predicted flare is observed, then the initial claims of the astronomers would be further supported.>>

From the Northwestern U. report above by bystander, fourth citation below quotation:

An international research collaboration including Northwestern University astronomers has witnessed the birth of an “intermediate-mass” black hole. This is the first conclusive discovery of an intermediate-mass black hole, an object which has long eluded astronomers. The cosmic event, its energy detected on Earth in the form of gravitational waves, is the most massive black hole merger yet observed in gravitational waves.

Two black holes likely collided and merged to create a more massive black hole with a final mass 142 times that of the sun, or 142 solar masses. This final black hole is the first to be found in an intermediate-mass range that lies between stellar-mass and supermassive black holes.

Another first is that the heavier of the two merging black holes, at 85 solar masses, is the first black hole so far detected within what is known as the “pair-instability mass gap.”

A rough definition of an intermediate-mass black hole is a BH having a mass of from 100 to 1,000 times solar mass. But it is hard to build such large massed BHs because the most massive stars tend to explode completely by way of a pair-instability supernova, sending all their material out into interstellar space, leaving no stellar remnant behind.


wikipedia/stellar massed black holes wrote:Mass gaps
It is expected that black holes with masses in certain specific ranges cannot be directly formed by the gravitational collapse of a star. Two such mass gaps are discussed, sometimes distinguished as "upper" and "lower" mass gaps.[10]

The upper mass gap is predicted by comprehensive models of late-stage stellar evolution. It is expected that supermassive stars finally reach a stage where a pair-instability supernova occurs, during which pair production, the production of free electrons and positrons in the collision between atomic nuclei and energetic gamma rays, temporarily reduces the internal pressure supporting the star's core against gravitational collapse.[11] This pressure drop leads to a partial collapse, which in turn causes greatly accelerated burning in a runaway thermonuclear explosion, resulting in the star being blown completely apart without leaving a stellar remnant behind.[12]

Pair-instability supernovae can only happen in stars with a mass range from around 130 to 250 solar masses and low to moderate metallicity (low abundance of elements other than hydrogen and helium – a situation common in Population III stars). However, this mass gap is expected to be extended down to about 45 solar masses by the process of pair-instability pulsational mass loss, before the occurrence of a "normal" supernova explosion and core collapse.[13]

So it is hard to form BHs massing over 45 suns directly from collapsing stars. Nonetheless, in this newly reported GW event apparently two BHs massing 85 and 66 times the sun merged, forming a 142 solar massed intermediate BH! A possible implication is that one or both of the pre merger BHs where also the products of earlier merger(s).

https://en.wikipedia.org/wiki/KAGRA wrote:
Click to play embedded YouTube video.
<<The Kamioka Gravitational Wave Detector (KAGRA), formerly the Large Scale Cryogenic Gravitational Wave Telescope (LCGT), is a project of the gravitational wave studies group at the Institute for Cosmic Ray Research (ICRR) of the University of Tokyo. It is the world's first gravitational wave observatory in Asia, the first built underground, and the first whose detector uses cryogenic mirrors. The design calls for an operational sensitivity equal to, or greater, than LIGO.

The LCGT project was approved on 22 June 2010. In January 2012, it was given its new name, KAGRA, deriving the "KA" from its location at the Kamioka mine and "GRA" from gravity and gravitational radiation. The project is led by Nobelist Takaaki Kajita who had a major role in getting the project funded and constructed. KAGRA has two arms, 3 km long, which form a laser interferometric gravitational wave detector. It is built in the Kamioka Observatory near the neutrino physics experiments. The excavation phase of tunnels was started in May 2012 and was completed on 31 March 2014. Initial operation ("iKAGRA") with room-temperature test masses was hoped to begin in December 2015. After the initial adjustment operations, the observation run started on 25 February 2020.

KAGRA will detect gravitational waves from binary neutron star mergers at up to 240 Mpc away with a signal to noise ratio of 10. The expected number of detectable events in a year is two or three. To achieve the required sensitivity, the existing state of the art techniques as used by LIGO and VIRGO (low-frequency vibration-isolation system, high-power laser system, Fabry-Pérot cavities, resonant side band extraction method, and so on) will be extended with an underground location, cryogenic mirrors, and a suspension point interferometer.>>