Explanation: Why is this galaxy so thin? Many disk galaxies are just as thin as NGC 5866, pictured here, but are not seen edge-on from our vantage point. One galaxy that is situated edge-on is our own Milky Way Galaxy. Classified as a lenticular galaxy, NGC 5866 has numerous and complex dust lanes appearing dark and red, while many of the bright stars in the disk give it a more blue underlying hue. The blue disk of young stars can be seen extending past the dust in the extremely thin galactic plane, while the bulge in the disk center appears tinged more orange from the older and redder stars that likely exist there. Although similar in mass to our Milky Way Galaxy, light takes about 60,000 years to cross NGC 5866, about 30 percent less than light takes to cross our own Galaxy. In general, many disk galaxies are very thin because the gas that formed them collided with itself as it rotated about the gravitational center. Galaxy NGC 5866 lies about 44 million light years distant toward the constellation of the Dragon (Draco).

Can the mass of the central black hole be inferred from the size of the bulge (supposing the bulge formed after the gas was gone with the active nucleus's wind) ?
Top

What can we say about the likely face-on appearance of NGC 5866 based on its edge-on view? Let's compare it with face-on NGC 4314. 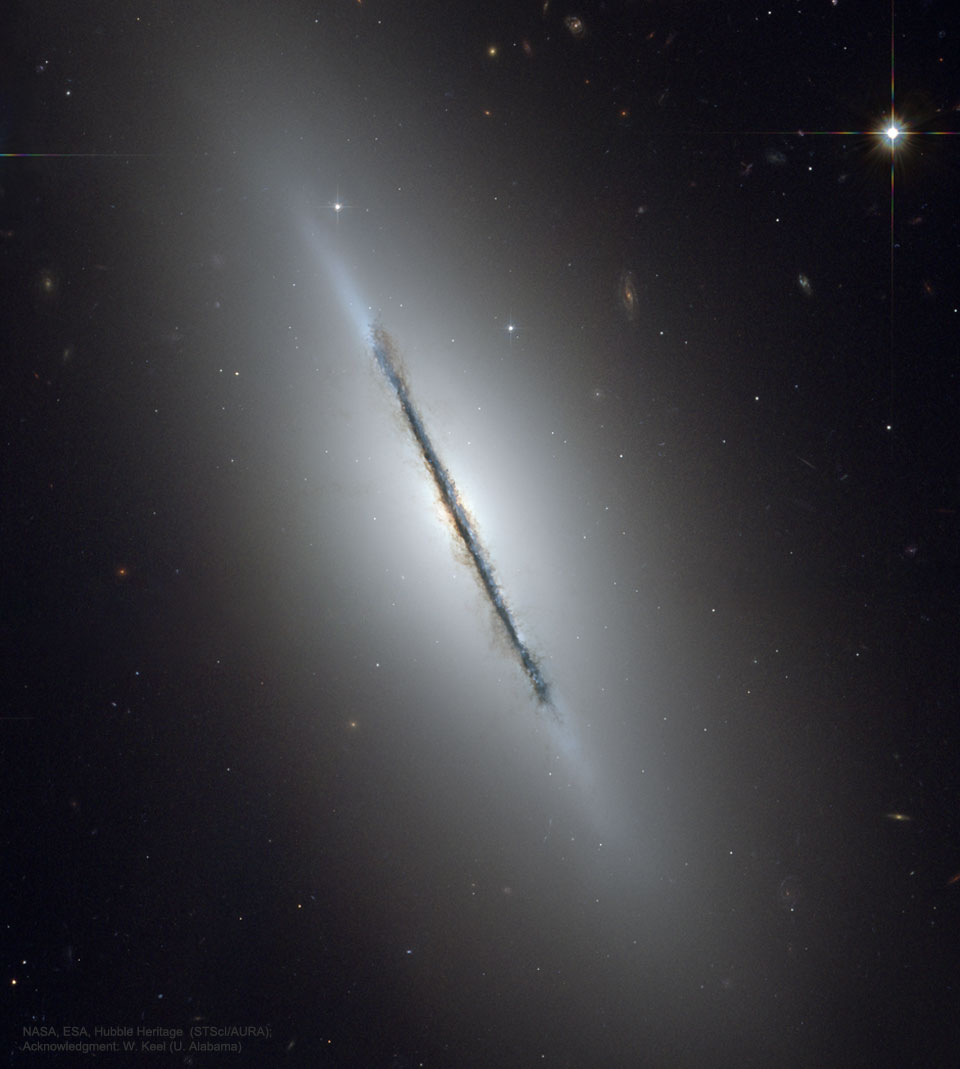 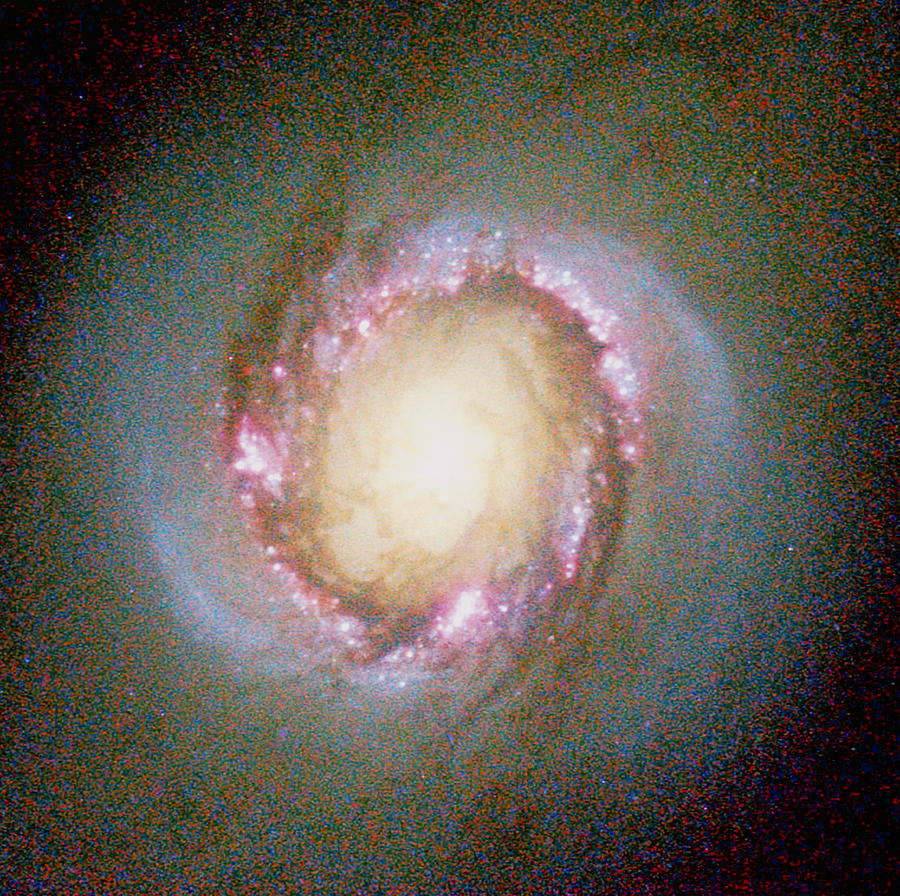 In NGC 5866 we have a short, extremely thin dark dust lane, at the outer edges of which soft "jets" of pale blue light seem to emanate. The inner part of the galaxy is enveloped in an extensive and elongated cocoon of non-blue light.

Now look at NGC 4314. This galaxy has a yellow center, surrounded by a relatively small but very actively starforming ring of dust, peppered with pink emission nebulas. Outside this ring of dust and star formation, we can make out two short, pale bluish, soft and smooth "arms".

These arms are the remnants of past star formation. Star formation scatters and uses up dust and forms high-mass stars that soon die. After a while, what is left is a smooth population of stars of similar ages, where the brightest are stars of spectral class A, similar to Sirius and Vega. After a while, the "Vegas" die, too, and gradually the remnant arms blend with the background, becoming all yellow. 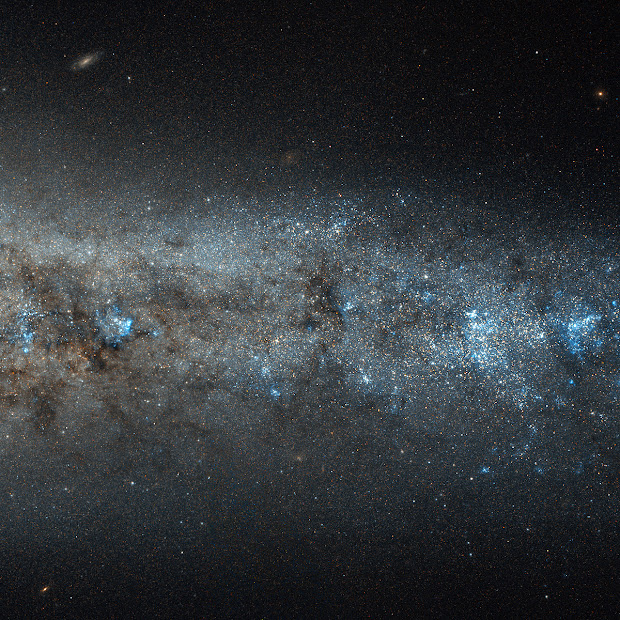 
Take a look at the picture of NGC 4314 in its entirety to see how small the inner part is. The rest of the galaxy, while it has an interesting shape, is uniformly smooth and non-blue in color.

Also take a look at a small part of edge-on galaxy NGC 4631. This is a starburst galaxy, and the central dust lane of this galaxy is broad, broken and chaotic, because high-mass stars wreak havoc on the orderliness of dust lanes. Note that we can't see a lot of the galaxy above or below the dust lane. Note, on the other hand, that the dust lane of NGC 5866 is almost razor-thin and sharp, and we can see "a lot of galaxy" above and below it.

(Even though we can see "smoke loops" rising from the dust lane. These may well be remnants of pas supernovas.)

Conclusion? There is almost nothing going on in the dust lane of NGC 5866. There is very little star formation, and possibly no high-mass star formation at all, in this galaxy.

NGC 5866 is a "red and dead" galaxy, with a small, shrinking inner dust disk and pale remnants of its former star formation glory in the shape of two very pale, very faintly bluish tiny inner arms.

Can the mass of the central black hole be inferred from the size of the bulge (supposing the bulge formed after the gas was gone with the active nucleus's wind) ?

Victor, you asked if "complex dust lanes" are magnetic loops. Well, frankly I can see no complex dust lanes in today's APOD. There are, however, loops rising out of the central dust lane. I think these loops are the remnants of supernova explosions, but you may be quite right that the dust and gas that was blasted into the halo of NGC 5866 by supernovas may have been caught in magnetic loops.

You also asked if the mass of the central black hole can be inferred from the size of the bulge. Maybe sometimes it can, but not always. The very slender and svelte galaxy NGC 4395 has been found to have a central black hole, even though it lacks a bulge altogether. M33, by contrast, has a hint of a bulge but seemingly no central black hole.

The Sdm galaxy NGC 4395 is seen here in an SDSS gri image. The low surface brightness, the lack of a bulge, and the presence of a nuclear star cluster are characteristic of dwarf, late-type galaxies. M 33 and M 101 are more luminous, higher-surface-brightness analogs (Kormendy et al. 2010).

NGC 4395 is one of the least luminous and nearest Seyfert galaxies known. The nucleus of NGC 4395 is notable for containing one of the smallest supermassive black holes with a well-measured mass. The central black hole has a mass of "only" 300,000 M☉. However, a recent study found a black hole mass of just 10,000 M☉. The low-mass black hole in NGC 4395 would make it a so-called "intermediate-mass black hole"

Quote, " One galaxy that is situated edge-on is our own Milky Way Galaxy. "

Er, yes, because we're IN it! We couldn't see it any other way!
Top

Er, yes, because we're IN it! We couldn't see it any other way!


Kinda what I was thinking!


Can the mass of the central black hole be inferred from the size of the bulge (supposing the bulge formed after the gas was gone with the active nucleus's wind) ?

Dust particles will often orient in galactic magnetic fields but they are relatively passive
as compared with the embedding of magnetic field lines in conducting plasma.

In a galaxy such as M51, the coherent magnetic field is observed to be associated with the optical spiral arms.

<<That spiral galaxies have magnetic fields has been known for well over half a century (and predictions that they should exist preceded discovery by several years), and some galaxies’ magnetic fields have been mapped in great detail.

But how did these magnetic fields come to have the characteristics we observe them to have? And how do they persist?

A recent paper by UK astronomers Stas Shabala, James Mead, and Paul Alexander may contain answers to these questions, with four physical processes playing a key role: infall of cool gas onto the disk, supernova feedback (these two increase the magnetohydrodynamical turbulence), star formation (this removes gas and hence turbulent energy from the cold gas), and differential galactic rotation (this continuously transfers field energy from the incoherent random field into an ordered field). However, at least one other key process is needed, because the astronomers’ models are inconsistent with the observed fields of massive spiral galaxies.

“Radio synchrotron emission of high energy electrons in the interstellar medium (ISM) indicates the presence of magnetic fields in galaxies. Rotation measures (RM) of background polarized sources indicate two varieties of field: a random field, which is not coherent on scales larger than the turbulence of the ISM; and a spiral ordered field which exhibits large-scale coherence,” the authors write. “For a typical galaxy these fields have strengths of a few μG. In a galaxy such as M51, the coherent magnetic field is observed to be associated with the optical spiral arms. Such fields are important in star formation and the physics of cosmic rays, and could also have an effect on galaxy evolution, yet, despite their importance, questions about their origin, evolution and structure remain largely unsolved.”>>

<<Galaxies have magnetic fields of their own. They are strong enough to be dynamically important: they drive mass inflow into the centers of galaxies, they modify the formation of spiral arms and they can affect the rotation of gas in the outer regions of galaxies. Magnetic fields provide the transport of angular momentum required for the collapse of gas clouds and hence the formation of new stars.

The typical average equipartition strength for spiral galaxies is about 10 μG (microGauss) or 1 nT (nanoTesla). For comparison, the Earth's magnetic field has an average strength of about 0.3 G (Gauss or 30 μT (microTesla). Radio-faint galaxies like M 31 and M 33, our Milky Way's neighbors, have weaker fields (about 5 μG), while gas-rich galaxies with high star-formation rates, like M 51, M 83 and NGC 6946, have 15 μG on average. In prominent spiral arms the field strength can be up to 25 μG, in regions where cold gas and dust are also concentrated. The strongest total equipartition fields (50–100 μG) were found in starburst galaxies, for example in M 82 and the Antennae, and in nuclear starburst regions, for example in the centers of NGC 1097 and of other barred galaxies.>>


How do we reconcile this statement with the subsequent post from neufer that has several links to pages that seem to imply that magnetic fields in galaxies can have quite a significant effect? (I seem to recall this subject coming up before!)
--
"To B̬̻̋̚o̞̮̚̚l̘̲̀᷾d̫͓᷅ͩḷ̯᷁ͮȳ͙᷊͠ Go......Beyond The F͇̤i̙̖e̤̟l̡͓d͈̹s̙͚ We Know."
Top


How do we reconcile this statement with the subsequent post from neufer that has several links to pages that seem to imply that magnetic fields in galaxies can have quite a significant effect? (I seem to recall this subject coming up before!)

I think you'll find more support for the view that galactic magnetic fields are not generally important in creating structure in galaxies. But there's lots we don't know about the mechanisms that shape galaxies, so I guess nobody knows for sure.
Chris

What I thought when asking was:
1) curved protuberances of Sun are plasma magnetic loops as are some low density plasma loops a light year long near the center of the Milky Way. What if dust curls about the edge-on view of NGC 5866 were too…? Well dust as such is not one with magnetic field lines, but maybe it traces the magnetic field lines somehow…
2) what holds a spiral disk galaxy flat is viscosity punishing random plane intersecting orbits. But stellar population alone has too low viscosity as globular stellar clusters and elliptic galaxies prove. And famous M87 with a large central black hole and a pair of magnificient jets is both elliptical and with a history of blows to account for becoming gas free.

Now I see:
1) galactic magnetic field is stronger than models predict but still weak. Dusty curls are more easily explained as fragments of spherical supernova remnants
2) galactic bulges are unflat and orange (=have few new stars born), but still are not statistically studied enough to equal them with gas-free globular stellar clusters and elliptic galaxies