Explanation: The night sky is filled with stories. Cultures throughout history have projected some of their most enduring legends onto the stars above. Generations of people see these stellar constellations, hear the associated stories, and pass them down. Featured here is the perhaps unfamiliar constellation of the Old Man, long recognized by the Tupi peoples native to regions of South America now known as Brazil. The Old Man, in more modern vernacular, may be composed of the Hyades star cluster as his head and the belt of Orion as part of one leg. Tupi folklore relates that the other leg was cut off by his unhappy wife, causing it to end at the orange star now known as Betelgeuse. The Pleiades star cluster, on the far left, can be interpreted as a head feather. In the featured image, the hobbled Old Man is mirrored by a person posing in the foreground. Folklore of the night sky is important for many reasons, including that it records cultural heritage and documents the universality of human intelligence and imagination.

OK, how many readers thought the wife got the wrong appendage? Talk about universality of thought!
Top

Universality of living, too?
This was in South America. The native peoples of Australia have a favoured one-legged standing position.

It seems that, over the ages, women have ruled the roost, at least at home. And now we are forced to spend more time at home ..
Top

<<Reddit is an American social news aggregation, web content rating, and discussion website. Reddit's logo consists of a time-traveling alien named Snoo and the company name stylized as "reddit". The alien has an oval head, pom-pom ears, and an antenna. Its colors are black, white, and orange-red. The mascot was created in 2005 while company co-founder Alexis Ohanian was an undergraduate at the University of Virginia. Ohanian doodled the creature while bored in a marketing class. Originally, Ohanian sought to name the mascot S'new, a play on "What's new?", to tie the mascot into Reddit's premise as the "front page of the Internet". Eventually, the name Snoo was chosen.

Snoo is genderless and colorless, so the logo is moldable. When Reddit revamped its website in April 2018, the company imposed several restrictions on how Snoo can be designed: Snoo's head "should always appear blank or neutral", Snoo's eyes are orange-red, and Snoo cannot have fingers. Snoo's purpose is to discover and explore humanity.>>

Unhappy wife huh! I'm glad mine is nicer, or maybe he was just a bad a==!

They certainly had vivid imaginations!

Folklore of the night sky is important for many reasons, including that it records cultural heritage and documents the universality of human intelligence and imagination. 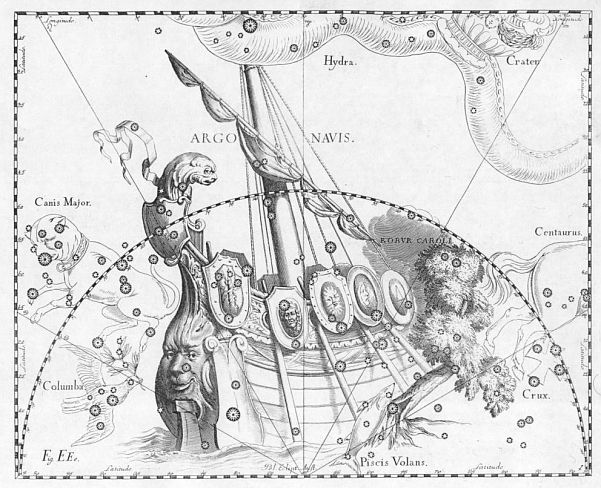 The constellation proved to be of unwieldy size, as it was 28% larger than the next largest constellation and had more than 160 easily visible stars. The 1755 catalogue of Nicolas Louis de Lacaille divided it into the three modern constellations that occupy much of the same area: Carina (the hull), Puppis (the poop deck) and Vela (the sails).

Argo derived from the ship Argo in Greek mythology, sailed by Jason and the Argonauts to Colchis in search of the Golden Fleece. Some stars of Puppis and Vela can be seen from Mediterranean latitudes in winter and spring, the ship appearing to skim along the "river of the Milky Way." Due to precession of the equinoxes, the position of the stars from Earth's viewpoint has shifted southward, and though most of the constellation was visible in Classical times, the constellation is now not easily visible from most of the northern hemisphere. All the stars of Argo Navis are easily visible from the tropics southward, and pass near zenith from southern temperate latitudes. The brightest of these is Canopus (α Carinae), the second-brightest night-time star, now assigned to Carina.

Argo Navis was long-known to Greek observers, who are theorised to have derived it from Egypt around 1000 BCE. Plutarch attributed it to the Egyptian "Boat of Osiris." Some academics theorized a Sumerian origin related to the Epic of Gilgamesh, a hypothesis rejected for lack of evidence that the Sumerians or other Mesopotamian culture considered these stars, or any portion of them, to form a boat.

Over time, Argo became identified exclusively with ancient Greek myth of Jason and the Argonauts. In his Almagest, Claudius Ptolemy described Argo Navis as occupying the portion of the Milky Way between Canis Major and Centaurus, and identified stars comprising such details as the "little shield", the "steering-oar", the "mast-holder", and the "stern-ornament", which continued to be reflected in cartographic representations in celestial atlases into the nineteenth century (see below). The ship appeared to rotate about the pole sternwards, so nautically in reverse. Aratus, the Greek poet / historian living in the third century BCE, noted this backward progression writing, "Argo by the Great Dog's [Canis Major's] tail is drawn; for hers is not a usual course, but backward turned she comes ...".

In modern times, Argo Navis was considered unwieldy due to its enormous size (28% larger than Hydra, the largest modern constellation). In his 1763 star atlas, Nicolas Louis de Lacaille explained that there were more than a hundred and sixty stars clearly visible to the naked eye in Navis, and so he used the set of lowercase and uppercase Latin letters three times on portions of the constellation referred to as "Argûs in carina" (Carina, the keel or hull), "Argûs in puppi" (Puppis, the poop deck or stern), and "Argûs in velis" (Vela, the sails). Lacaille replaced Bayer's designations with new ones that followed stellar magnitudes more closely, but used only a single Greek-letter sequence and described the constellation for those stars as "Argûs". Similarly, faint unlettered stars were listed only as in "Argûs".

The final breakup and abolition of Argo Navis was proposed by Sir John Herschel in 1841 and again in 1844. Despite this, the constellation remained in use in parallel with its constituent parts into the 20th century. In 1922, along with the other constellations, it received a three-letter abbreviation: Arg. The breakup and relegation to a former constellation occurred in 1930 when the IAU defined the 88 modern constellations, formally instituting Carina, Puppis, and Vela, and declaring Argo obsolete. Lacaille's designations were kept in the offspring, so Carina has α, β, and ε; Vela has γ and δ; Puppis has ζ; and so on. As a result of this breakup, Argo Navis is the only one of the 48 listed by Ptolemy in his Almagest no longer officially recognized as a single constellation.

In addition, the constellation Pyxis (the mariner's compass) occupies an area near that which in antiquity was considered part of Argo's mast. Some recent authors state that modern Pyxis was part of the ancient Greek conception of Argo Navis, but magnetic compasses were unknown in ancient Greek times, nor does it appear that the stars now in Pyxis were included in the original conception of Argo Navis. Lacaille considered it a separate constellation representing a modern scientific instrument (like Microscopium and Telescopium), that he created for maps of the stars of the southern hemisphere. Pyxis was listed among his 14 new constellations, separate from Argo. In 1844, John Herschel suggested formalizing the mast as a new constellation, Malus, to replace Lacaille's Pyxis, but the idea did not catch on. Similarly, an effort by Edmond Halley to detach the "cloud of mist" at the prow of Argo Navis to form a new constellation named Robur Carolinum (Charles' Oak) in honor of King Charles II, his patron, was unsuccessful.

In Vedic astronomy, Indian observers also saw the asterism as "the Boat". The Māori had several names for what was the constellation, including Te Waka-o-Tamarereti (the canoe of Tamarereti), Te Kohi-a-Autahi (an expression meaning "cold of autumn settling down on land and water"), and Te Kohi.>>