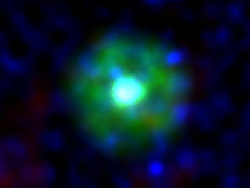 
In astronomy, a "nova" (Latin for "new") designates the appearance of a new star in the sky. These days it's rather commonplace to find and identify new stars in the heavens. But finding an entirely new type of star is very rare. In 2019, astronomers reported the discovery of a strange object at the center of a small, glowing, spherical cloud. This object is extremely hot, with a surface temperature of 200,000 degrees, about 40 times hotter than the Sun. Weirdly, this object showed no evidence of any hydrogen and helium, the most abundant elements in the Universe. The object also emits an extremely fast moving wind, with a speed of 36 million miles per hour - fast enough to go from the earth to the moon in a mere 24 seconds. These properties, and evidence of high rate of spin and strong magnetic fields, suggest that this object formed from the merger of two white dwarf stars. White dwarfs are the hydrogen- and helium-deficient, burnt-out cores of relatively common, low-mass stars like the Sun formed once the star runs out of nuclear fuel (this will sadly happen to the Sun in about 5 billion years). White dwarfs are extremely dense: a teaspoonful of white-dwarf matter would weigh as much as a small truck. A strange thing about white dwarfs is that they have an upper mass limit, the so-called "Chandrasekhar limit" (named for Subrahmanyan Chandrasekhar, who first calculated it), which is about 1.4 times the mass of the Sun. So it's not clear what would happen if two white dwarfs stars merged together, but such mergers should naturally happen from the evolution of binary stars (which are very common in the Milky Way). X-ray observations of this object with the XMM-Newton X-ray observatory were made to help understand the high-energy emission from this object and to help prove whether this object is really a white-dwarf merger. The false-color X-ray image is shown above, and reveals very bright X-ray emission from both the central object and the nebula which surrounds it. The X-ray emission also shows that the object has a strange composition, containing lots of astrophysically unusual elements like neon, magnesium, silicon and sulfur. The X-ray data indicates that this object is associated with a strange supernova event, and adds further support that this object is the result of the collision and merger of two white dwarfs in a binary star system. Theories suggest that this object is unstable, and may suffer (another) supernova in only about 10,000 years. Best keep an eye on it!


Nature: Brilliant X-rays reveal what might be a new type of star
phys.org: Study of nebula IRAS 00500+6713 suggests its central star is unlike any seen before

Know the quiet place within your heart and touch the rainbow of possibility; be
alive to the gentle breeze of communication, and please stop being such a jerk. — Garrison Keillor
Top
3 posts • Page 1 of 1