Eclipse over the Temple of Poseidon

Explanation: What's happened to the Sun? The Moon moved to partly block the Sun for a few minutes last week as a partial solar eclipse became momentarily visible across part of planet Earth. In the above single exposure image, meticulous planning enabled careful photographers to capture the partially eclipsed Sun well posed just above the ancient ruins of the Temple of Poseidon in Sounio, Greece. Unexpectedly, clouds covered the top of the Sun, while a flying bird was caught in flight just to the right of the eclipse. At its fullest extent from some locations, the Moon was seen to cover the entire middle of the Sun, leaving the surrounding ring of fire of an annular solar eclipse. The next solar eclipse -- a total eclipse of the Sun -- will occur on 2010 July 11 but be visible only from a thin swath of the southern Pacific Ocean and near the very southern tip of South America.

The marvelous eclipse interactive map lets us know
that the sun rose in partial eclipse and reached
peak eclipse 2.75º above the horizon at 5:58.24 UTC (7:58.24 local time).

(Thank Poseidon they got that olive tree in!)
Art Neuendorffer
Top

Yeah, someone should let Anthony know that the olive tree is a running gag now and he has to make sure it makes it into all his future photos.
Just call me "geck" because "zilla" is like a last name.
Top

According to information brought up through a link in the explanation the image was taken by Chris Kotsiopoulos with assistance from Anthony in determining from where to take it. Clearly Anthony likes to ensure the olive tree is there even if he is only assisting.

Thanks for the kind words and which I will forward to Chris. I must confess that the tree is gaining fame and perhaps may need a special photo of its own!

Please note that it is NOT an olive tree but an evergreen. If there is interest, I will get more info with further details.

Thanks again to everyone.

It does need a photo of its own! I love trees. What kind of evergreen is it?

I blame neufer for the assumption that it was an olive tree...
Just call me "geck" because "zilla" is like a last name.
Top

geckzilla wrote:It does need a photo of its own! I love trees. What kind of evergreen is it?

I blame neufer for the assumption that it was an olive tree...

Brittany under the sacred Olive Tree at the Temple of Poseidon in Sounio: 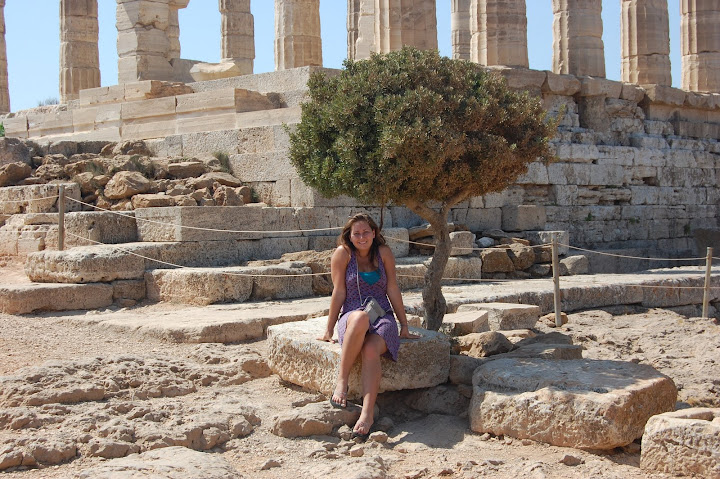 http://atheism.about.com/od/greekmythologyreligion/ig/Sounion-Temple-Poseidon-Greece/Sounion-Temples-Athena.htm wrote:
<<According to Greek legend, Athena had to compete for the role of patron of the Attica region generally and Athens specifically. Poseidon wanted that authority as well so the gods decided that there should be a contest: the role of protector would go to whomever gave mortal men there the best gift. Poseidon struck the rocky ground on the Acropolis with his trident and a salty spring appeared. Athena, however, brought forth an olive tree. The gods deemed Athena's gift best because it required care, attention, patience, and cultivation from humans - it was, in a sense, a symbol of civilization. Thus Athena became the patron of Athens, but the Athenians never forgot Poseidon's interest in them and honored him on the Acropolis as well (their dependence on sea trade didn't hurt, either). By the north porch of the Erechtheion on the Acropolis of Athens, Greece, is the Sacred Olive Tree. Pausanias wrote that the day after the Persians burned the Acropolis in 480 BCE this tree sprouted a new branch four feet long. Legend also says that this olive tree can be traced back to the tree originally planted by Athena here. Every invader cut it down and every time someone saved a sprig to be planted later. The most recent replanting was done by members of the American School in 1952 who saved it bit from what the Germans destroyed in 1942.>>

Well, it was a very well researched assumption... which makes it not an assumption at all. Olive trees are evergreens, it seems.
Just call me "geck" because "zilla" is like a last name.
Top

I just checked and indeed olive trees are considered evergreens. To this end, thank you for the correction as well as the bit of trivia!

http://en.wikipedia.org/wiki/Olive wrote:
<<Olive trees are very hardy, drought-, disease- and fire-resistant, and can live for a very long time. Its root system is very robust and capable of regenerating the tree even if the above-ground structure is destroyed. The older an olive tree is, the broader and gnarlier its trunk appears. Many olive trees in the groves around the Mediterranean are said to be several centuries old, and in some cases this has been verified scientifically.

Olive tree on Ithaca, Greece that is claimed to be over 1500 years old:

Pliny the Elder told of a sacred Greek olive tree that was 1600 years old. Several trees in the Garden of Gethsemane (from the Hebrew words "gat shemanim" or olive press) in Jerusalem are claimed to date back to the time of Jesus. Some Italian olive trees are believed to date back to Roman times, although identifying progenitor trees in ancient sources is difficult.

One olive tree in Bar, Montenegro, is claimed to be over 2000 years old:

The age of an olive tree in Crete, claimed to be over 2,000 years old, has been determined on the basis of tree ring analysis. Another well-known olive tree on the island of Brijuni (Brioni), Istria in Croatia, has been calculated to be about 1,600 years old. It still gives fruit (about 30 kg/66 lb per year), which is made into top quality olive oil.

An olive tree in west Athens, named "Plato's Olive Tree", was rumored to be a remnant of the grove within which Plato's Academy was situated, which would date it to approximately 2,400 years ago. The tree was a cavernous trunk from which a few branches were still sprouting in 1975, when a traffic accident caused a bus to fall on and uproot it. Since then the trunk is preserved and displayed in the nearby Agricultural University of Athens. A supposedly even older tree, called the "Peisistratos Tree", is located by the banks of the Cephisus River and is said to be a remnant of an olive grove planted by Athenian tyrant Peisistratos in the 6th century BC.

According to a recent scientific survey, there are tens of ancient olive trees throughout Biblical Israel. Specifically, two giant olive trees in the Arab town of Arraba and five trees in Deir Hanna, both in Galilee region, have been determined to be over 3000 years old. All seven trees continue to produce olives.>>

neufer wrote:The tree was a cavernous trunk from which a few branches were still sprouting in 1975, when a traffic accident caused a bus to fall on and uproot it.

There's something very frustrating about being a member of Homo sapiens when I hear about things like this. Even more tragic is the story of Arbre du Ténéré.
Just call me "geck" because "zilla" is like a last name.
Top

neufer wrote:The tree was a cavernous trunk from which a few branches were still sprouting in 1975,
when a traffic accident caused a bus to fall on and uproot it.

There's something very frustrating about being a member of Homo sapiens when I hear about things like this.
Even more tragic is the story of Arbre du Ténéré.

http://www.vsaint.com/prince/ch5.html wrote:
Now there were some terrible seeds on the planet that was the home of the little prince; and these were the seeds of the baobab. The soil of that planet was infested with them. A baobab is something you will never, never be able to get rid of if you attend to it too late. It spreads over the entire planet. It bores clear through it with its roots. And if the planet is too small, and the baobabs are too many, they split it in pieces...

"It is a question of discipline," the little prince said to me later on.

"When you've finished your own toilet in the morning, then it is time to attend to the toilet of your planet, just so, with the greatest care. You must see to it that you pull up regularly all the baobabs, at the very first moment when they can be distinguished from the rosebushes which they resemble so closely in their earliest youth. It is very tedious work," the little prince added, "but very easy." And one day he said to me: "You ought to make a beautiful drawing, so that the children where you live can see exactly how all this is. That would be very useful to them if they were to travel some day.

Sometimes," he added, "there is no harm in putting off a piece of work until another day. But when it is a matter of baobabs, that always means a catastrophe.

I knew a planet that was inhabited by a lazy man. He neglected three little bushes...

So, as the little prince described it to me, I have made a drawing of that planet. I do not much like to take the tone of a moralist. But the danger of the baobabs is so little understood, and such considerable risks would be run by anyone who might get lost on an asteroid, that for once I am breaking through my reserve. "Children," I say plainly, "watch out for the baobabs!" My friends, like myself, have been skirting this danger for a long time, without ever knowing it; and so it is for them that I have worked so hard over this drawing.

The lesson which I pass on by this means is worth all the trouble it has cost me. Perhaps you will ask me, "Why are there no other drawing in this book as magnificent and impressive as this drawing of the baobabs?" The reply is simple. I have tried. But with the others I have not been successful. When I made the drawing of the baobabs I was carried beyond myself by the inspiring force of urgent necessity.