Comments and questions about the APOD on the main view screen.
21 posts • Page 1 of 1

Explanation: The Sleeping Beauty galaxy may appear peaceful at first sight but it is actually tossing and turning. In an unexpected twist, recent observations have shown that the gas in the outer regions of this photogenic spiral is rotating in the opposite direction from all of the stars! Collisions between gas in the inner and outer regions are creating many hot blue stars and pink emission nebula. The above image was taken by the Hubble Space Telescope in 2001 and released in 2004. The fascinating internal motions of M64, also cataloged as NGC 4826, are thought to be the result of a collision between a small galaxy and a large galaxy where the resultant mix has not yet settled down.

This galaxy is more commonly known as the Black Eye galaxy, which is, I think, a much better name than the Sleeping Beauty galaxy (a name I've not heard before).
Chris

Chris Peterson wrote:This galaxy is more commonly known as the Black Eye galaxy, which is, I think, a much better name than the Sleeping Beauty galaxy (a name I've not heard before).

http://seds.org/messier/m/m064.html
http://en.wikipedia.org/wiki/Sleeping_Beauty_Galaxy
Know the quiet place within your heart and touch the rainbow of possibility; be
alive to the gentle breeze of communication, and please stop being such a jerk. — Garrison Keillor
Top

So is it the dark dust shown in this picture that is counter rotating, or more like the large faint extension shown in this image: http://apod.nasa.gov/apod/ap070802.html ?

Chris Peterson wrote:
This galaxy is more commonly known as the Black Eye galaxy, which is, I think,
a much better name than the Sleeping Beauty galaxy (a name I've not heard before).

http://en.wikipedia.org/wiki/Berenice_II_of_Egypt wrote:
<<Berenice II (267 BC – 221 BC) was the wife of Ptolemy III Euergetes, the third ruler of the Ptolemaic dynasty of Egypt. During her husband's absence on an expedition to Syria, she dedicated her hair to Aphrodite for his safe return, and placed it in the temple of the goddess at Zephyrium. The hair having by some unknown means disappeared, Conon of Samos explained the phenomenon in courtly phrase, by saying that it had been carried to the heavens and placed among the stars. The name Coma Berenices or Berenice's hair, applied to a constellation, commemorates this incident.

This story is parodied in Alexander Pope's The Rape of the Lock. Three of Uranus's moons are named after characters from The Rape of the Lock: Belinda, Umbriel, and Ariel. The predecessor of the modern city Benghazi was refounded by her and received her name: Berenice.>>

http://www.cummingsstudyguides.net/Guides2/Pope.html wrote:
Alexander Pope's The Rape of the Lock Summary
By Michael J. Cummings...© 2005
.
.......Pope opens with a statement announcing the topic of his poem: A gentleman–a lord, in fact–has committed a terrible outrage against a gentlewoman, causing her to reject him. What was this offense? Why did it incite such anger in the lady?

.......The woman in question is named Belinda. She is sleeping late one day in her London home when a sylph–a dainty spirit that inhabits the air–warns her that “I saw, alas! some dread Event impend.” The sylph, named Ariel, does not know what this event is or where or how it will manifest itself. But he does tell Belinda to be on guard against the machinations of men.

.......Belinda rises and prepares herself for a social gathering, sitting before a mirror and prettying herself with “puffs and powders” and scenting herself with “all Arabia.” Afterward, she travels up the Thames River to the site of the social festivities, Hampton Court, the great palace on the north bank of the river that in earlier times was home to King Henry VIII. As she sits in the boat, “Fair Nymphs, and well-drest Youths around her shone, / But ev'ry Eye was fix'd on her alone.” In other words, she was beautiful beyond measure. She smiled at everyone equally, and her eyes–bright suns–radiated goodwill. Especially endearing to anyone who looked upon her were her wondrous tresses:
.......Among Belinda’s admirers is a young baron at Hampton Court awaiting her arrival. He has resolved to snip off a lock of her hair as the trophy of trophies. Before dawn, before even the sun god Phoebus Apollo arose, the Baron had been planning the theft of a lock of Belinda's hair. To win the favor of the gods, he had lighted an altar fire and, lying face down before it, prayed for success.
.......After Belinda arrives at Hampton Court with her company of friends, the partygoers play Ombre, a popular card game in which only 40 of the 52 cards are dealt--the eights, nines, and tens are held back. It appears that the Baron will win the game after his knave of diamonds captures her queen of hearts. However, Belinda yet has hope, even after the Baron plays an ace of hearts:
.......Belinda wins! Coffee is served, the vapors of which go to the Baron’s brain and embolden him to carry out his assault on Belinda’s hair. Clarissa, a lady who fancies the Baron, withdraws scissors from a case and arms him with the weapon. When he closes in behind Belinda, she bends over her coffee, exposing a magnificent lock. But a thousand sprites come to her aid, using their wings to blow hair over the lock. They also tug at one of her diamond earrings to alert her to the danger. Three times they warn her and three times she looks around. But all is for naught. The Baron opens wide his weapon, closes it around the lock, and cuts. The rape of her lock enrages Belinda:
.......A gnome named Umbriel descends to the Underworld on Belinda’s behalf and obtains a bag of sighs and a vial of tears from the Queen of Spleen. With these magical gifts, he means to comfort poor Belinda. First, he empties the bag on her. A gentleman named Sir Plume--prompted by his belle, Thalestris, a friend of Belinda--then roundly scolds the Baron for his grave offense. But the Baron is unrepentant. Umbriel then empties the vial on Belinda. Grief overcomes her as her eyes half-drown in tears and her head droops upon her bosom. She says:
.......Clarissa tries to mollify Belinda in a long speech, but fails. A bit of a melee ensues when Belinda attempts to retrieve her lost lock. “Fans clap, Silks russle, and tough Whalebones crack.” Belinda proves a fierce combatant. She attacks the Baron “with more than usual Lightning in her Eyes” and throws a handful of snuff from Sir Plume's box up his nose. But, alas, when the battle ends, the lock is nowhere to be found.
.......However, the poem ends on a happy note for Belinda, Pope says, because the trimmed lock of her golden hair has risen to the heavens, there to become a shining star.

It is a beautiful galaxy; and black eye also fits it well! What a wonderful picture, Orin!

Today's APOD is nice, too. I appreciate the choice of filters: there is both a blue filter and an H-alpha filter, so that you can see young clusters and star formation regions in M64. 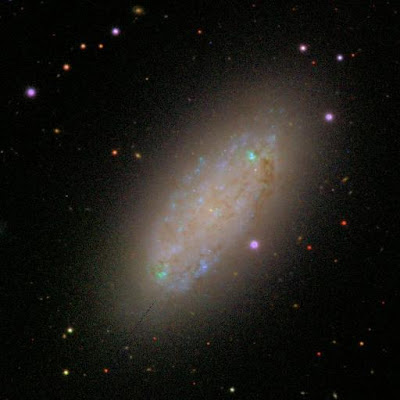 I love peering into this photo - it almost looks like a bowl with the sense of two layers of disks stacked together.
Top

It's hard to say this without sounding critical, and I am BY NO MEANS TRYING TO BE CRITICAL, but has the free-association here stepped-up a notch?

Counter-rotating galaxies to Sleeping Beauty to Berenice's hair to cats and dogs sleeping together... Wow.

Don't get me wrong, it's always worth a couple of smiles to see how peoples' thoughts go here. I think Art may be the all-time king of free-association, and it might be rubbing off. Keep up the good work, Art and everyone!

FYI, the actual APOD image seems to me to be a bit overprocessed. But it was new news to me that there is counterrotation in there. VERY interesting! It's as though the galaxy sucked up a blob of black stuff it encountered some time in the distant past.

NoelC wrote:It's hard to say this without sounding critical, and I am BY NO MEANS TRYING TO BE CRITICAL, but has the free-association here stepped-up a notch?

Counter-rotating galaxies to Sleeping Beauty to Berenice's hair to cats and dogs sleeping together... Wow.

M64 is in the constellation Coma Berenices (literally, Berenice's hair), and the cat and dog picture is from the settled down link in the APOD text.
Know the quiet place within your heart and touch the rainbow of possibility; be
alive to the gentle breeze of communication, and please stop being such a jerk. — Garrison Keillor
Top

Geeze, so many people miss the LINKS. That's half the fun!! Lynx - they're bigger than Bobcats.
To find the Truth, you must go Beyond.
Top

Beyond, bobcats are lynxes.
A closed mouth gathers no foot.
Top

That's true, but not all lynxes are bobcats.
Chris

Note to self: Follow all the links, and all the links from those sites for good measure, before commenting here.

It's easier to follow the lynx in the winter. You just click on the tracks.
To find the Truth, you must go Beyond.
Top

That's true, but not all lynxes are bobcats.

But then Lynx and Bobcat have another relationship.
and don't forget...
all bobcats

and a lynx is a Mercury! That's one hell of the explanation neufer Indeed, Art really brightened this thread, and others most certainly also contributed!

Myself, boring galaxy nerd that I am, can't help noticing that the characteristic that makes M64 so special is that its dust disk is so tiny. In this dust disk, some star formation is going on; outside it, the dust is evenly distributed and very tenuous among intermediate and old stars, and no new stars are being born.

Perhaps M64 is the perfect example of the "transition" between dusty starforming spirals and dust-free lenticular galaxies. What happens in many cases may be that the dust disk shrinks and disappears, and then the galaxy moves into the cosmic retirement home where no new stars are being born, no new clusters glitter and no nebulae shine red and blue any more.

Or, maybe it's just down sizing, like a lot of us, given the situation now-a-days.