Explanation: NGC 3314 is actually two large spiral galaxies which just happen to almost exactly line up. The foreground spiral is viewed nearly face-on, its pinwheel shape defined by young bright star clusters. But against the glow of the background galaxy, dark swirling lanes of interstellar dust appear to dominate the face-on spiral's structure. The dust lanes are surprisingly pervasive, and this remarkable pair of overlapping galaxies is one of a small number of systems in which absorption of light from beyond a galaxy's own stars can be used to directly explore its distribution of dust. NGC 3314 is about 140 million light-years (background galaxy) and 117 million light-years (foreground galaxy) away in the multi-headed constellation Hydra. The background galaxy would span nearly 70,000 light-years at its estimated distance. A synthetic third channel was created to construct this dramatic new composite of the overlapping galaxies from two color image data in the Hubble Legacy Archive.

The image looks to me as if one galaxy is slicing through the other, rather like a buzz-saw, but the notes
suggest that they are lying in the same plane. Perhaps I am looking at it wrongly.
Top

kulinderpal@gmail.com wrote:
What is the chance of such alignments happening given the number density of galaxies,
particularly as we go deeper in the universe at higher redshifts ?

With "large assemblies of galaxy groups and clusters, located at the intersections of sheets and filaments"
the probability is higher than one might think at first. 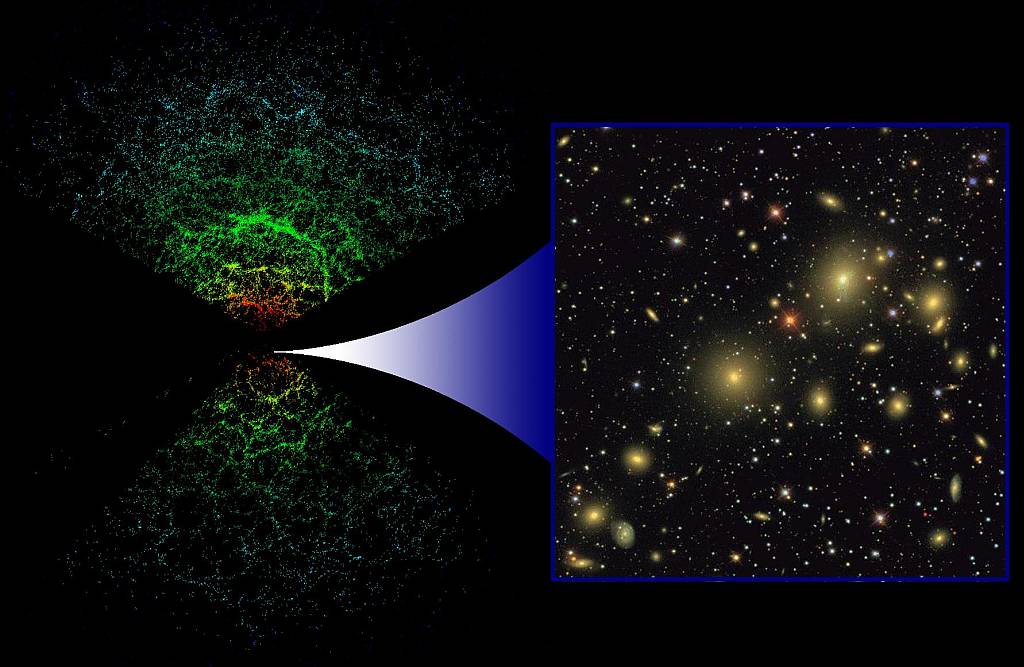 Planck's first glimpse at galaxy clusters and a new supercluster

<<Surveying the microwave sky, Planck has obtained its very first images of galaxy clusters, amongst the largest objects in the Universe, by means of the Sunyaev-Zel'dovich effect, a characteristic signature they imprint on the Cosmic Microwave Background. Joining forces in a fruitful collaboration between ESA missions, XMM-Newton followed up Planck's detections and revealed that one of them is a previously unknown supercluster of galaxies.

Matter in the Universe is distributed in a highly clustered fashion; stars congregate in galaxies and galaxies clump together, forming enormous clusters surrounded by vast, empty spaces. Galaxy clusters can host up to a thousand galaxies and they are permeated by hot gas that shines brightly in X-rays; furthermore, most of their mass consists of dark matter. On an even grander scale are the superclusters, large assemblies of galaxy groups and clusters, located at the intersections of sheets and filaments in the wispy cosmic web. As clusters and superclusters trace the distribution of both luminous and dark matter throughout the Universe, their observation is crucial to probe how cosmic structures formed and evolved.>>

Check out this page for examples of overlapping galaxies: http://www.astr.ua.edu/white/pairs/obstbl.html

Here is a small black and white image of NGC 3314:

Here is the field of galaxies from which the image of NGC 3314 was extracted:

The PGC, Principal Galaxy Catalog, has this to say about NGC 3314 (among other things):

Conclusions: NGC 3314 would immediately appear to be a smallish galaxy. On the other hand, the fact that one galaxy is in front of the other one might mean that the total luminosity is higher than it appears to be. The galaxy that is behind the other one could have a very bright but hidden center, which would raise the luminosity a lot if we could see it.

NGC 3314 is a moderately blue galaxy. There is definitely star formation, but not an overwhelming amount of it. However, there might be more than we can see or detect with B-V and U-B indexes, because there may be quite a lot of star formation that is hidden by dust. Question: Does the star formation belong to both galaxies in equal amounts? Or is it, perhaps, mostly located in the foreground galaxy?

NGC 3314 is a relatively dusty galaxy. It is 1½ magnitudes brighter in the far infrared than in blue light. This testifies to the dusty nature of the foreground galaxy. It is difficult to say much about the background galaxy, or so I think, but I may be wrong about that.

..... A synthetic third channel was created to construct this dramatic new composite of the overlapping galaxies from two color image data in the Hubble Legacy Archive.

What is a "synthetic third channel "? It seems to be some kind of photoshop technique.
Top

I swoon in admiration!

(I've worked with those data, originally taken for a gravitational-microlensing search, but never managed such a nice color representation).

The synthetic third channel rises from the fact that these data were taken in only two filters (B and V, more or less). Galaxy colors are almost a one-parameter family, so you can do a visually very credible job predicting the third channel (red in this case) from the other two (the biggest error in that extrapolation would be not catching areas with strong H-alpha emission).

Edit to add - one of the incredible things about this data set is the extent to which you can see myriads of resolved stars in the outer arms of NGC 3314A (in front) in what looks to be blank space in the previous WFPC2 image (first link in the APOD text, to one of the early Hubble Heritage releases). The background here goes deeper than the original Hubble Deep Field in these filters, so prowling the deep background is unusually interesting.
Top

biddie67 wrote:What is a "synthetic third channel "? It seems to be some kind of photoshop technique.

I love APOD for the amazing and thought provoking images displayed!! Thank you for them! I often wonder what we would see if our little patch of the unverse were in the midst of a giant star cluster or our solar system were part of the nearer of the two galaxies in this image. How much "busier" would our night sky be or would there be little difference due the massive distances involved?
Top

The Galaxy Zoo project, as a spinoff, has generated a list of 1990 overlapping pairs from the Sloan Digital Sky Survey; there are about 200,000 galaxies bright enough to enter it, so that says that roughly 0.5% of galaxies are in such pairs. At brighter levels, 10-20 such overlapping pairs are found in the ~5000 galaxies in the NGC catalog, for 0.2-0.4%. Another thing going on in the current Hubble Zoo project is identification of such overlaps at higher redshifts, so we can look for evolution in the dust content of galaxies as cosmic time (and their star formation) proceeds. Indeed the fraction of overlaps should increase with distance, because the depth over which galaxies appear comparably large goes up. One big help with the Hubble samples is the volume of spectroscopy obtained by the collective efforts of observers at Keck and the ESO VLT, so we can spot unrelated overlaps by seeing two sets of spectral lines at different redshifts. We can also do this with the SDSS spectra, but it doesn't happen in more than about 100 cases because the SDSS spectra usually get only the nuclear regions of brightish galaxies.
Top

Another (perhaps more useful) question. Should'nt there be a distortion on the image of the farther galaxy, due to gravitational lensing from the galaxy in the middle?
Top

ricardelico wrote:Another (perhaps more useful) question. Should'nt there be a distortion on the image of the farther galaxy, due to gravitational lensing from the galaxy in the middle?

There is. But the galaxies are far too close together, and too close to us, for the effect to be apparent. A gravitational lens created by a galaxy is a very, very low power lens.
Chris

I imagine the view from one of these galaxies toward the other would be remarkable. I guess they are several million miles away from each other. Anyone know how far Andromeda is from the milkway way just for comparison purposes?
Top

CSaunders wrote:I imagine the view from one of these galaxies toward the other would be remarkable. I guess they are several million miles away from each other. Anyone know how far Andromeda is from the milkway way just for comparison purposes?

From the APOD description:

So those two are about 23 million light-years apart. Andromeda is about 2.5 million light-years away from the Milky Way, so those two galaxies are almost 10 times further apart than the Milky Way and Andromeda. So I don't think the view from one to the other would be all that spectacular. In fact, they'd each be just a very small smudge in the sky when viewed by the naked eye from the other one -- assuming the naked eyes doing the viewing are similar in capability to ours.

I was just looking at some of Adam Block's splendid galaxy pictures at http://www.caelumobservatory.com/gallery/galaxies.shtml. Adam has photographed overlapping galaxies NGC 5545 and 5544. These two galaxies appear to be quite close together, but they apparently haven't distorted one another at all. They are interestingly different in apperance. Highly inclined NGC 5545 is blue and pink from young stars and star formation, and it has relatively massive dust features that stand out well against the comparatively bland disk of face-on NGC 5544, whose broad beige spiral arms betray no signs of star formation.

A very famous overlapping pair of galaxies is of course NGC 2207 and IC 2136:

This well-known Hubble image shows how one arm belonging to NGC 2207 passes in front of the face of IC 2136. The arm shows up a brown dust feature against the bright disk of IC 2136, even though the same arm looks mostly blue from starlight when it is seen against the blackness of space.

I always find that I feel especially fortunate to be able to clearly see the matter density of the foreground galaxy because it is nicely backlit!