UC Irvine astronomers have shown how the Milky Way galaxy’s iconic spiral arms form, according to research published today in the journal Nature.

A dwarf galaxy named Sagittarius loaded with dark matter has careened twice through our much larger home galaxy in the past two billion years, according to telescope data and detailed simulations, and is lined up to do it again. As the galaxies collide, the force of the impact sends stars streaming from both in long loops. Those continue to swell with stars and are gradually tugged outward by the Milky Way’s rotation into a familiar ringed arm.

It’s the weighty dark matter from Sagittarius that provided the initial push, the researchers said.

“It’s kind of like putting a fist into a bathtub of water as opposed to your little finger,” said James Bullock, a theoretical cosmologist who studies galaxy formation.

The smaller galaxy pays a steep price though – sucked inward repeatedly by the Milky Way’s mightier gravity, it’s being ripped apart by the blows, sending huge amounts of its stars and dark matter reeling into the new arms.

“When all that dark matter first smacked into the Milky Way, 80 percent to 90 percent of it was stripped off,” explained lead author Chris Purcell, who did the work with Bullock at UCI and is now at the University of Pittsburgh. “That first impact triggered instabilities that were amplified, and quickly formed spiral arms and associated ring-like structures in the outskirts of our galaxy.”

The Sagittarius galaxy is due to strike the southern face of the Milky Way disk fairly soon, Purcell said – in another 10 million years or so.

Multiple dwarf strikes gave Milky Way its spirals
New Scientist | Justin Mullins | 2011 Sept 14
Know the quiet place within your heart and touch the rainbow of possibility; be
alive to the gentle breeze of communication, and please stop being such a jerk. — Garrison Keillor
Top

Very many spirals are seen to have companion galaxies, which are sometimes but not always spirals themselves: 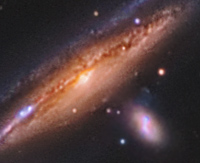 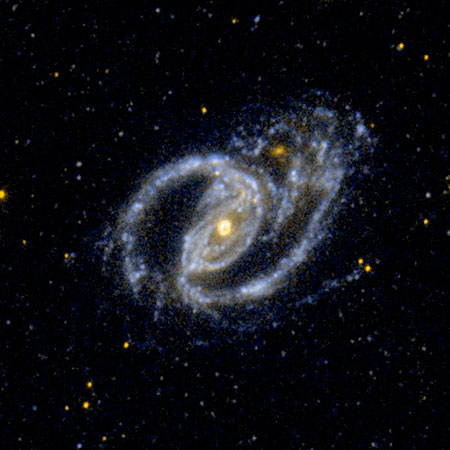 Ultraviolet image of spiral galaxy NGC 1097 with small companion galaxy NGC 1097A entangled in one of the arms of the larger galaxy at one o'clock. Photo: GALEX.

Visible-light image of spiral image 1512 with companion NGC 1510, and an ultraviolet image of the same galaxy pair. Credit: NASA/JPL-Caltech/DSS/GALEX.

Pitt: How the Milky Way Got Its Spiral

The signature spiral arms of the Milky Way galaxy were likely formed by an epic collision between the Milky Way and the Sagittarius Dwarf galaxy, according to a University of Pittsburgh researcher and his collaborators, published today in the prestigious British journal Nature. [i]Computer simulation showing three scenarios of the impact of the Sagittarius Dwarf galaxy with the Milky Way.[/i]

Supercomputer simulations by Christopher W. Purcell, postdoctoral research associate in the Department of Physics and Astronomy in Pitt’s School of Arts and Sciences, and colleagues report their findings in a paper titled “The Sagittarius Impact as an Architect of Spirality and Outer Rings in the Milky Way.”

This paper is the first to identify Sagittarius as the architect of spiral structure in our Milky Way: “It presents a new and somewhat unexpected way of thinking about why the galaxy we live in looks the way it does,” says Purcell. “Cosmologically speaking, it demonstrates the idea that relatively small impacts like this can have a dramatic impact on the structure of galaxies throughout the universe,” he adds. This idea had been assumed theoretically, but never demonstrated.

In the field of cosmology, supercomputer simulations are the only laboratories for scientific experimentation. With supercomputers, astronomers can recreate a small-scale simulation or model of distant, violent events that occurred over billions of years, and observe that model in sped-up time, in order to make predictions that can be tested by actual observations of the universe.

Purcell’s findings are based on supercomputer simulations he conducted for his PhD at the University of California, Irvine, and in the lab of Pitt professor of physics and astronomy Andrew Zentner. Interestingly, Purcell’s simulations revealed that even more important than the stars of the Sagittarius Dwarf was its halo of invisible “dark matter”—equal in mass to all the stars in the Milky Way.

Visible matter makes up less than five percent of the universe, while nearly a quarter of the universe is made of transparent dark matter. Its existence is felt only through its gravitational influence. It is now known that every galaxy, including the Sagittarius Dwarf (precollision) and our own Milky Way, resides at the center of a giant halo of dark matter several times larger in radius and many times greater in mass.

“When all the dark matter smacked into the Milky Way, 80 to 90 percent of it was stripped off,” Purcell says. That first impact—more than two billion years ago—produced instabilities that were quickly amplified, eventually forming the spiral arms and ring structures in the outskirts of our own galaxy.
In his dissertation, Purcell focused on the question: What effects have the repeated collisions with the Sagittarius Dwarf had on the Milky Way?

Throughout the past few decades, conventional wisdom has been that the Milky Way was relatively unperturbed for the past several million years. Whatever spiral structure exists, these arms were just a result of the Milky Way disc evolving in isolation.

Since the Sagittarius Dwarf was discovered, astronomers have tried to match up debris from that galaxy to what they saw in the universe. In 2003, infrared telescopes and supercomputers that traced the orbital motions of its stars has revealed that the Sagittarius Dwarf had actually collided with the Milky Way twice—once 1.9 billion years ago and again 0.9 billion years ago.

“But what those collisions did to the Milky Way hadn’t been simulated at all,” says Purcell. “Ours was the first ever to try to do that.”
Researchers found that the collision set up instabilities—fluctuations in density of stars—in the flat disk of the rotating Milky Way. Our galaxy rotates faster toward its center than toward its edges, so those instabilities were stretched and sheared, leading to the formation of spiral arms. The simulations also revealed that the impact gave rise to ring-like structures found at the edges of our galaxy.

The second impact affected the Milky Way less, giving rise to only milder, less dense spiral-creating waves, because the Sagittarius Dwarf had by then lost most of its dark matter mass. Without the dark matter to hold the dwarf galaxy together, its visible stars began to be pulled apart by the Milky Way’s huge gravitational field and tidal forces.

“The dominant cosmology in astrophysics is one that’s very violent on small scales. Galaxies like the Milky Way are constantly being bombarded by these small dwarf galaxies. It had not been appreciated prior to our work just how dramatic those impacts could be on the stellar disc itself,” says Purcell. “We expected to find some more subtle signatures of an impact like this—a flare in the outer disc, like bell-bottom jeans. We expected to see some mild morphological changes to the Milky Way.

But we did not expect to see a spiral structure begin to emerge as a result of these impacts. That was something we didn’t foresee.”
Indeed, Purcell and collaborators delayed publication for several months while they made sure they understood why they were seeing these results. “We had to convince ourselves that we weren’t crazy,” he jokes.

Today, long streamers of stars from the dismembered dwarf galaxy arch over and around the Milky Way, and “right now, billions and billions of dark matter particles from the Sagittarius Dwarf are raining down onto the Earth,” said Purcell. “Meantime, the Sun itself is revolving around the center of the Milky Way Galaxy, in a complex and still-evolving system of multiple spiral arms.”

We’re just a few million years short of a third impact, Purcell says. But how can the researchers tell?

“We can tell when we look toward the center of the Milky Way,” says Purcell. “Immediately on the opposite side of us, we can see this blob of stars crashing into the southern face of the disc from beneath. We can measure the velocities of these stars. We know that the dwarf galaxy is just about to smash the disc—in only another 10 million years.”

'Beware of the wildlife, even in apparently quiet galaxies'
Iowa State University | Mike Krapfl | 2011 Sept 15
Know the quiet place within your heart and touch the rainbow of possibility; be
alive to the gentle breeze of communication, and please stop being such a jerk. — Garrison Keillor
Top
3 posts • Page 1 of 1