Explanation: Have you ever dreamed of flying high above the Earth? Astronauts visiting the International Space Station do this every day, circling our restless planet twice every three hours. A dramatic example of their view was compiled in the above time-lapse video from images taken earlier this month. As the ISS speeds into the nighttime half of the globe, familiar constellations of stars remain visible above. An aerosol haze of Earth's thin atmosphere is visible on the horizon as an thin multi-colored ring. Many wonders whiz by below, including vast banks of white clouds, large stretches of deep blue sea, land lit up by the lights of big cities and small towns, and storm clouds flashing with lightning. The video starts over the northern Pacific Ocean and then passes from western North America to western South America, ending near Antarctica as daylight finally approaches.

I've been trying to follow the track of the orbit that the ISS seems to be taking in this video; The first city lights could be around Seattle and Portland, then I'm pretty sure I can make out the lights of San Francisco and LA, on down the Gulf of California passing over La Paz at the tip of the peninsula by around 23 seconds, onwards over Mexico where there are a lot of lights, continuing down the western coast of Nicaragua and Costa Rica at around 35 seconds (superb views of those storms!), then it gets quite tricky to make out from there. The large lake that passes below at around 55 seconds could be Lake Titicaca on the border between Peru and Bolivia. I think it runs into the glare of daybreak as it traverses somewhere over Chile and Argentina. So not quite as far south towards Antarctica as the description suggests.

4 links showing the video! No reason to miss it.

Loved the video showing how lit up the cities can be seen from orbit and the lightning in the clouds!

Beautiful video. The large lake in South America is definitely Lake Titicaca, with La Paz at the southern end. I was initially confused as well by what appears to be the ocean and the east coast of South America as one person mentioned in their comment, but it turns out to be the vast forested darkness of inland South America.
Top

If you look carefully over the horizon, in the night sky above the earth's atmosphere, it shows some tiny specs of light. These seem to rise like stars as the ISS advances. I wonder if these are stars? Any idea what these could be?
Top

Back during the early days of the Space Shuttle, they had a video camera that was used to monitor activities in the payload bay. During crew sleep periods, ground controllers would orient the thing to provide a view of the ground and then feed the video out to NASA TV, which was available on cable in our area. It was fascinating to watch. On night-time passes over continents you could almost make out individual city streets defined by street lights. In the equatorial latitudes lightning was almost a constant. On a pass over Egypt one time, looking back to the west, a large bolide exploded into a spray of smaller fragments, perhaps over Libya or Algeria. People thought I was a little tetched, as they say, but I literally could watch the show for hours on end.
Virgil H. Soule
Top

Does anyone know what those green lights are in Central America, from about :25 to :35. It looks like they might be in Guatemala or nearby. Do they have green city lights? Or is it white light shining upward through a rain forest canopy?
Top

As I write this (0:55 UTC), the ISS is flying a similar path, from the North Pacific just south of Alaska, Pacific Coast just north of Washington, then across the US to South Carolina, across the Caribbean, crossing northern Brasil to the Atlantic. Since the orbital inclination is 51.6413 degrees, it is difficult for me to imagine a pass from the coast of northern US over San Francisco and Peru. [http://www.heavens-above.com/] I type so fast that now it is north of Cuba.

The next orbit will fly over Seattle to the Gulf of Mexico near Corpus Christie, TX, touch Cancun and eastern-most Honduras, across the Caribbean to Columbia, the out to the Atlantic near Uruguay.

Then the orbit after that will fly over the North Pacific, stay off the west coast until it crosses over land above Ecuador to the coast of Argentina to the Southern Atlantic.
[http://spaceflight.nasa.gov/realdata/tr ... index.html]

I'll poke around the NASA site to find a graph of all tracks to try to figure out which track the movie documents. If not, all of the orbital elements are there for those interested, providing enough information to produce such a graph.
Top

Sorry, I should have checked the APOD links before posting idle speculation.

You can download the images used to create the movie here: http://eol.jsc.nasa.gov/Videos/CrewEart ... onsVideos/

Looking at the night side, extraterrestrial visitors might be forgiven for thinking there's a lot of volcanic activity on the planet.

Significant things that caught my eyes:

1. The huge bank of thunderstorms offshore from Puerto Vallarta with all the lightning strikes a bit right of center at about 0:23, and that in general there weren't as many different storms with lightning across the planet as I guessed there might be.

2. The subtantially green looking lighting left of center at about 0:31. Is this a country (Guatemala? El Salvador?) that uses primarily different lighting than the rest of the planet?

4. The sheer overall beauty of our blue marble with its white clouds.

Where is the overall white light illumination coming from? I thought maybe it ws moonlight but the angle of the light on the surface didn't seem to change enough.

4 links showing the video! No reason to miss it.

http://asterisk.apod.com/viewtopic.php?t=25306
Know the quiet place within your heart and touch the rainbow of possibility; be
alive to the gentle breeze of communication, and please stop being such a jerk. — Garrison Keillor
Top

This and rocket cams are the things that should never be taken away. Cheers for this stuff. Can we ask the ASA poobah's to show the entire sequence of rocket cam footage. And perhaps add a camera to the parachute system of a mars lander ?
Top

That's a beautiful APOD. starstruck, I want to thank you very much for your comment on it. You are quite new here, but your comment is so well written and so enthusiastic, and you scrutinized the video so carefully before you wrote it.

O K
Beautiful video and beautiful planet Earth.
The planet Earth is very pecualiar in the Universe.
It´s very blue and.. and... it has life
Top

At 0:55 there is a tiny white dot moving left to right. It looks like a satellite or a piece of space junk lit by the sunlight. Or it may be simply an internal reflection of the camera...
Top 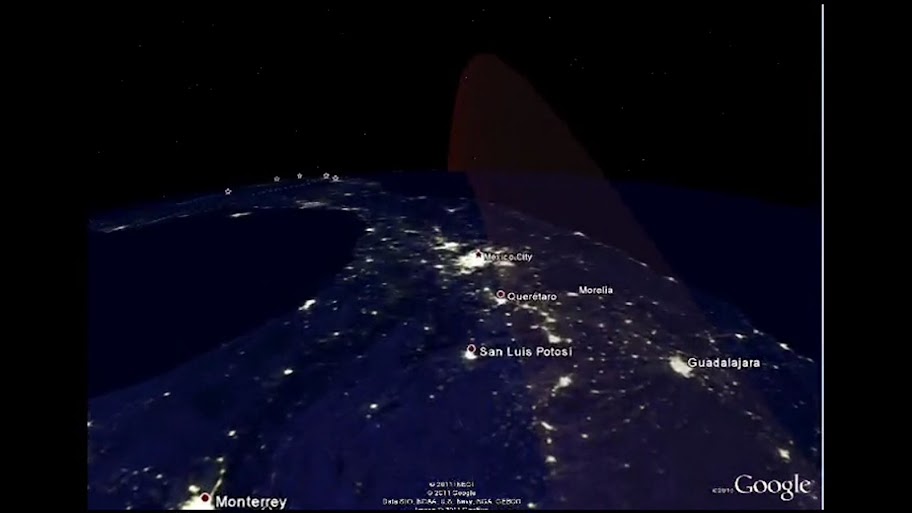 A few of you might be interested in this fly-over simulation. It's not as good a quality as I wanted, but it is pretty good.
The only date that fits for this ISS path is 30 August, around 4:30am UT. I've created the actual ISS orbit and ground track in Google Earth where the faint redish "wall" represents the ISS orbit. The top of the wall is the orbital position at the correct altitude, and the bottom of the is the ground track. The simulated fly-over altitude is ~550km, and follows a different heading. I believe the most southern city visible in the POD video is Buenos Aires.
A pessimist is nothing more than an experienced optimist
Top

Yeah, that is interesting to see. Good idea, thanks for posting your simulation. I think you pretty much nailed it.

How can I create a loop so that this will play over and over again as my screen saver?
Top
19 posts • Page 1 of 1