Comet Lovejoy and the ISS

Explanation: On December 24, Comet Lovejoy rose in dawn's twilight, arcing above the eastern horizon, its tails swept back by the solar wind and sunlight. Seen on the left is the comet's early morning appearance alongside the southern Milky Way from the town of Intendente Alvear, La Pampa province, Argentina. The short star trails include bright southern sky stars Alpha and Beta Centauri near the center of the frame, but the long bright streak that crosses the comet tails is a little closer to home. Waiting for the proper moment to start his exposure, the photographer has also caught the International Space Station still glinting in the sunlight as it orbits (top to bottom) above the local horizon. The right panel is the near horizon view of Comet Lovejoy from the space station itself, captured only two days earlier. In fact, Dan Burbank, Expedition 30 commander, recorded Comet Lovejoy rising just before the Sun in a spectacular video (linked here). Even considering the other vistas available from low Earth orbit, Burbank describes the comet as "the most amazing thing I have ever seen in space."

Well, that certainly is a nice touch. Seeing the comet and the ISS and then seeing the comet from the ISS. Whomever thought of doing that, deserves a pat on the back and a round of applause.

That really was a great idea. It's interesting to know what a comet would look like from space. Good going!
The following statement is true.
The above statement is false.
Top

I've made an android app that makes it easy to see the ISS. It will give you a signal right before the ISS will pass over your location. For those who like to try it:
ISS Detector
https://market.android.com/details?id=c ... ssdetector
Top

Such great photos of the comet! I'm really jealous of the southerners these days! 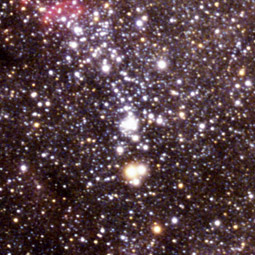 Note that the comet's head is positioned right at cluster NGC 6231. It is particularly obvious in the picture of the comet taken from the ISS. In this (blurry) picture, the triangle brightish yellowish stars below center is Zeta1 and Zeta2 Scorpii and HD 152293. The small bright white "thing" above the triangle of yellowish stars is cluster NGC 6231 itself. Note how a "spray" of stars is curving away up and to the left above NGC 6231, ending in a red emission nebula.

In the ISS image of Comet Lovejoy, note how this whole configuration can be seen to the lower right of the comet, although "turned the other way". The "spray of stars" is curving down and to the left, not up and to the left. The triangle made up of Zeta1 and Zeta2 Scorpii and HD 152293 is above and to the right of the "curving spray of stars". The small bright concentrated cluster NGC 6231 can be seen immediately to the lower left of Zeta1 and Zeta2 Scorpii and HD 152293.

Love when someone figures out the right time and the right place to take a photo!! Great pairing of pictures, for sure!

What puzzles me is why there is more than one tail ~~ what could have caused the split in the tail? And why is there an apparent curve in the tail?
Top

biddie, one is the dust tail, and the other the ion tail. Wikipedia has an article on comet tails here.
A closed mouth gathers no foot.
Top

Thanks, owlice ~~ that was a great explanation!!
Top

I remember seeing Hale-Bopp back around '97. Over a good number of weeks it provided the best view of a comet I had ever seen. This one looks even more spectacular, I wish it was visible to us in the Northern Hemisphere

Comet Lovejoy and something else

Great photos today. I linked to the provided video "http://www.nasa.gov/multimedia/videogal ... =125774121" to view the spectacular video, and it was worth seeing. I took it one step further and clicked on the "full screen" button to view the video at full size. Now, here is the odd part. At 8 seconds, and continuing to about the 11 second mark, I saw something small appear at the horizon just left of center, then rise through the atmosphere towards the left, then apparently exit the atmosphere. I do not know what that was. It disappeared once it exited the atmosphere. My first thought was that it was a high flying jet, but it kept rising. Then I thought perhaps it was a satellite being launched. But it would have to be a polar orbit satellite, and those are pretty rare. Can anyone offer a scientific identification of the item I saw?
Top

Wonder if this interloper is related to comet McNaught ? piece of it or the other half ?
Top

Wolf Kotenberg wrote:Wonder if this interloper is related to comet McNaught ? piece of it or the other half ?

then the only connection left is whoever is in charge of shooting comets at the sun is a lousy shot, but an awesome showman.
Top