Jupiter on December 1st reaching its maximum opposition. The Moon Io is shown transiting across the Jovian disc and the shadow slightly ahead due to the angle facing the sun and viewed face on (Opposition) from earth.

NGC 772 (also known as a peculiar spiral galaxy Arp 78) is an unbarred giant spiral galaxy approximately 106 million light-years away in the constellation Aries. It is notable for possessing a single elongated outer spiral arm. The asymmetric spiral arms are distorted by interaction with the dwarf elliptical galaxy NGC 770. NGC 770 appears to be at about the same distance as NGC 772, so it is most likely a true companion to the larger spiral system. It has a separation of only 160 000 light-years from its larger companion with an actual diameter of only about 40 000 light-years. NGC 772 is huge, having a diameter of 208 000 lightyears, making it twice the diameter of our Milky Way Galaxy.

Jupiter was closest to Earth on 01-12-2012 just as it was rising in Hungary at 16:00 local time. The pic is a composite of a series taken an hour later when the planet appeared on my sky, from 16:54 to 17:12 local time (UT +1 hour). Each shot was 1 minute 50 second apart from each other so both Jupiter and its visible Galilean moons are present. When I begin taking the photoes the sky was clear but soon some small high level clouds arrived in front of an approaching cyclone and these clouds created an oval aureole around Jupiter. The image shows both the clear and both the aureoled planet. There series I took was also perfect for a short timelapse which is even more spectacular regarding the aureole forming: http://youtu.be/cTX1ACnFuBo

An average round aureole can form when any type of thin cloud is present, only the particle size of that counts. Oval aureoles are less common, they form when the clouds contain ice crystals that drift in the cloud horizontally (see explanation at Les Cowley's site: http://atoptics.co.uk/fz732.htm ) so high level clouds are likely to form oval aureoles as they contain ice crystals. The other circumstance needed for an oval aureole is the small altitude of the celestial body by which it forms, so a rising or setting bright planet or star is a perfect object for this. Hunting for oval aureoles is an interesting thing not only for the haunting beauty of the hazy planets / stars but for scientific significance of the exact observations of a less known phenomena. (5x2 seconds for the core area) 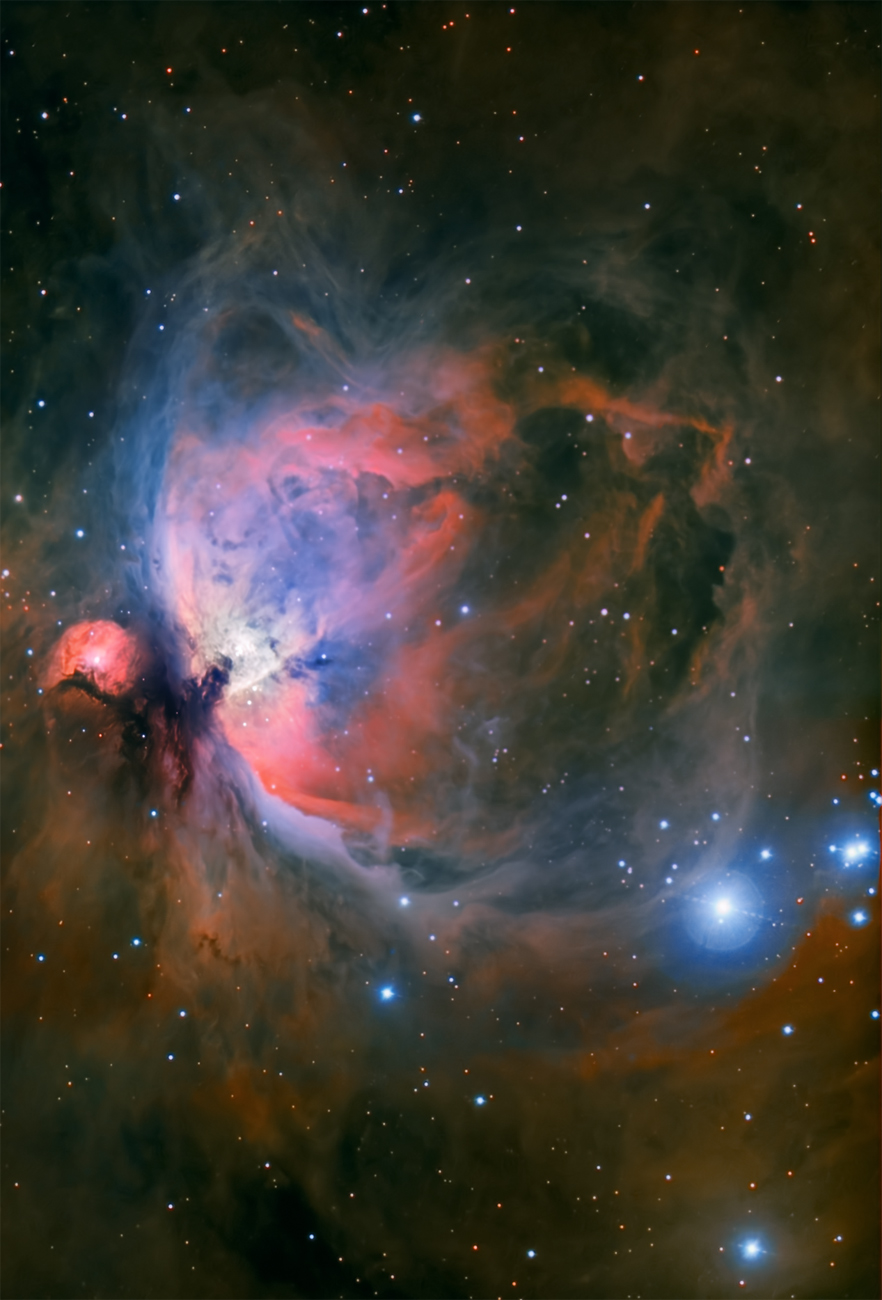 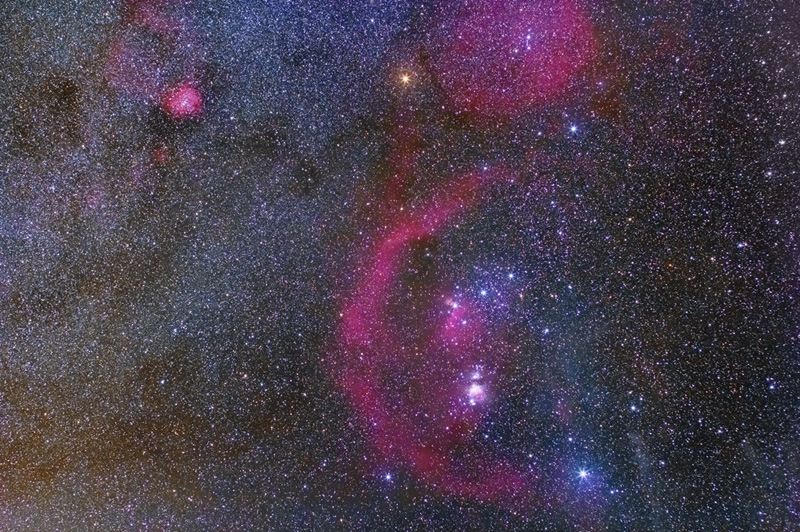 Beautiful image! You can even see the supernova remnant, the Monoceros Loop to the left of the Rosette Nebula! Skies must have been really dark!
Top

This image shows the great Orion Nebula (Messier 42) in infrared light. Traditional images of the Orion Nebula taken in visible light primarily display the familiar and striking magenta colour from H-Alpha emission, as well as large dark obscuring clouds of dust. But infrared light penetrates these clouds better and allows for a peek deep into the heart of the nebula, revealing complex details and hundreds of bright young stars that are otherwise completely invisible.
These stars shine primarily in the infrared and appear as golden red in this image. Only a minority of these are even visible in traditional images.
The infrared region seems largely unexplored by amateur astronomers. But using a filter that only allows infrared light (>700nm) to pass through allows obtaining an image of these hidden features. Effectively the band observed is 700-1100nm since the sillicon CCD chip is not responsive to wavelengths longer than that, and this band is called NIR (Near Infrared).
One issue arising from this technique is that the NIR band does not have a colour as such, since it lies outside the visible light spectrum. So I thought for a while about how to best produce a colour image that whould emphasize the NIR data. I decided to substitute the R channel with NIR which nicely brings out the contrast between the nebula itself and all the young obscured stars that shine primarily in infrared.
I used a NIR filter together with G and B filters to create this colour composite. The resulting images were assigned to the different channels as NIR->Luminance, NIR->Red, G->Green and B->Blue.
The CCD sensor (KAF-8300) is no where near as sensitive in the NIR band as it is in visible light so I gathered a lot longer exposure time in NIR than in G an B. Still, the Orion Nebula is so bright that overall integration time was just 1 hour and 21 minutes.
The Orion Nebula lies 1350 light-years away in the constellation Orion and is the closest stellar factory to us. Here new stars are born out of the dense clouds of gas and dust. The nebula is lit up by the four bright young stars in the centre called the Trapezium. These stars form a small cluster and many more are in fact present, as can be seen in this infrared view.

Beautiful image! You can even see the supernova remnant, the Monoceros Loop to the left of the Rosette Nebula! Skies must have been really dark!

Thank you Starsurfer. The part of the sky where this image was taken was actually under the influence of a partial light dome but otherwise fairly dark. Took a bit of processing finesse to get all the details. I was also surprised to see the Monoceros loop.
Jon Talbot
Top Conjunction of the planets Saturn, Mercury and Venus with its reflection in the Mediterranean Sea, photo taken on 12-02-2012.


iko2.jpg
Full size http://cdn.astrobin.com/images/cc173dce ... af4432.jpg
You do not have the required permissions to view the files attached to this post.
Last edited by owlice on Fri Dec 07, 2012 6:04 am, edited 2 times in total.
Reason: Attached smaller image for faster downloading; left link to larger image. Please keep images under 400K. Thanks for sharing!
Top

Spiral Galaxy NGC 7331
Copyright: Stefano Conti
http://www.astroconti.com
[attachment=0]NGC-7331-LRGB-2-rid.jpg[/attachment]
You do not have the required permissions to view the files attached to this post.
A closed mouth gathers no foot.
Top

Jupiter on December 2nd, 04:24ut and less then 24 hours from maximum opposition. The Storms Oval Ba and GRS are heading towards the dark side of the planet.


Thank you for your consideration
Bill W
astro.whwiii.net
Top

John Bunyan
Leaving Mauna Kea
[attachment=0]Leaving-Mauna-Kea.apod.jpg[/attachment]
You do not have the required permissions to view the files attached to this post.
Top A hybrid result involving the central area of the Veil Nebula Complex in Cygnus comprised of 150 minutes of h-alpha, 150 minutes of O-III and 30 minutes each for RGB.

Both the h-alpha and O-III filters do an admirable job in picking up significant signal which otherwise is missed or overlooked, thus yielding a very impressive hybrid result.
You do not have the required permissions to view the files attached to this post.
Anthony Ayiomamitis
http://www.perseus.gr
Top I used a small amount of data (27 x 4 minute Luminance, 7 x 3 minute RGB) and used PixInsight to reveal the dusty surroundings of M45. It becomes clear that the beautiful blue nebulosity is a reflection of the light from the stars.
Top 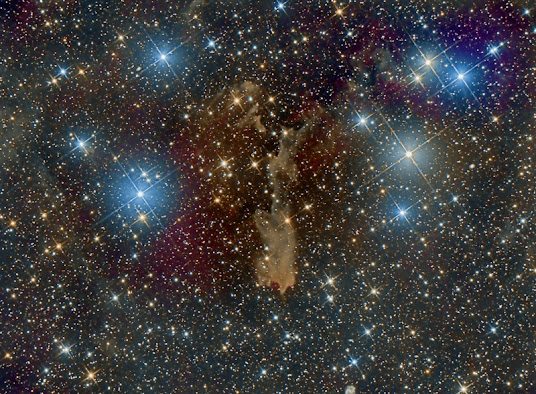 Deep South in the Constellation of Reticulum, lies this asymmetric shaped Galaxy which is also considered as a Starburst Galaxy. There is evidence of brilliant clouds and massive blue stars scattered though its disc which spans through 50.000 light years. NGC 1313 is also rich in powerful Wolf Rayet stars of which 70 candidates where detected.

The image was taken with an 6” f5 reflector Orion Optics UK and a QSI WS 583 riding on a SW NEQ6 110 km north from Buenos Aires City Argentina.

Thanks for looking and Best Regards !!
Sergio
You do not have the required permissions to view the files attached to this post.
Top

Jupiters Opposition cycles of 9 years in this collage.
[attachment=0]Jupiter_Morales.jpg[/attachment]
http://www.jaicoa-observatory.com/Jup-2 ... 12-EMr.jpg
You do not have the required permissions to view the files attached to this post.
Last edited by owlice on Fri Dec 07, 2012 6:30 am, edited 2 times in total.
Reason: Attached smaller image for faster downloading; left link to larger image. Please keep images under 400K. Thanks for sharing!
Top

Processed in PixInsight and Photoshop

Melotte 15 in the Heart nebula. Reprocessing from data obtained in the last 3 months.

ic1805_hubble_final_26112012_v6web.jpg
You do not have the required permissions to view the files attached to this post.
Top
155 posts