A different view of the colors of the Moon´s surface. The following star trail photograph was made of 91 twenty second exposures taken during the Geminid meteor shower. One small meteor can be seen just to the north of Pollux and Castor. Each image was taken with a Canon t2i and a Sigma 10-20mm lens with a Tiffen Double Fog #2 filter to add a little diffusion and soften the image.
Top

I presume that this is aurora gravity waves

Dec 25: Jupiter (and Galilean moons) from behind!

This enhanced, false-color shot of the north pole of Dione was taken by Cassini on Christmas Eve, 2012, and assembled by Ian Regan.

http://www.unmannedspaceflight.com/inde ... t&id=29326
[attachment=0]dione.jpg[/attachment]
You do not have the required permissions to view the files attached to this post.
Last edited by owlice on Wed Dec 26, 2012 11:13 pm, edited 2 times in total.
Reason: Attached smaller image for faster downloading; left link to larger image. Thanks for sharing!
Top

process by photomatix pro 4.2 developped by HDRsoft and CS5.

Yesterday I managed to catch Jupiter-Moon conjunction between some cloud and fog.

Here it is the result:

181.jpg
179.jpg
180.jpg
You do not have the required permissions to view the files attached to this post.
Top 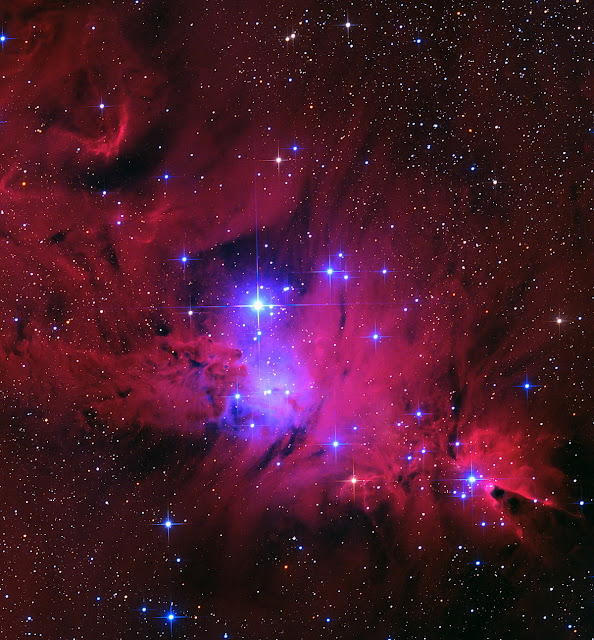 Last full moon of the year

The last full moon of the year as seen from Ankara, Turkiye.
Copyright: M. Raşid Tuğral
The Moon is set,
And the Pleiades.
Night's half gone,
Time's passing.
I sleep alone now. ” Here's the Rosette – through H-alpha only, such that its many filaments and the whole turmoil of gas and dust is clearly seen.
Details: SBIG ST8300M, Officina Stellare Riccardi-Honders Veloce 200 RH OTA , Astrodon Ha 5nm, NEQ6 mount, guided w/PHD.

Full size here: http://www.pbase.com/boren/image/147972462
You do not have the required permissions to view the files attached to this post.
Last edited by owlice on Fri Dec 28, 2012 2:13 pm, edited 1 time in total.
Reason: Attached smaller image for faster downloading; left link to larger image. Thanks for sharing!
Top

This is what happens when the scope operator doesn't wake up on time, an hour or so after the meridian The mount just stops to avoid an unfortunate clash...Thank God !

M1 Crab Nebula imaged using narrowband and LRGB filters. I live in an urban area with pretty bad light pollution, so the narrowband filters help with that.
Colour assignment is Red - Oiii, Green - Ha, Blue - S2, which seems to give the closest approximation to the HST M1 colour scheme in the famous image. Bluish cloud separated from other data and then overlaid.

A composite image can be seen here:

Minor planets makes not only an opposition arc in the sky during their opposition, but also the daily loops by earth rotation.
Combining both motions in an image look strange.
The image was made with the 37cm/f14 SSON remote telescope at 2012 December 05, 06 and 07 and is only a part of a bigger stacked composite. Each day I made around 15 exposures (each 60 sec and seperate by 30 minutes) and stacked them together.
At the picture you see at right the long trail of (1264) Letaba (around 14.7 mag) (not in the opposition arc) at 2012 December 06 and at the left the three days of the arc of (3382) Cassidy (around 15.8 mag).
Because earth rotation the arc of the minor planet is overlayed by a part of the daily motion (when the minor planet was high in the sky).
You can simulate this using a sky chart program like Cartes du Ciel (http://www.backup-jahn.de/astrotreff/ciel-karte.jpg). 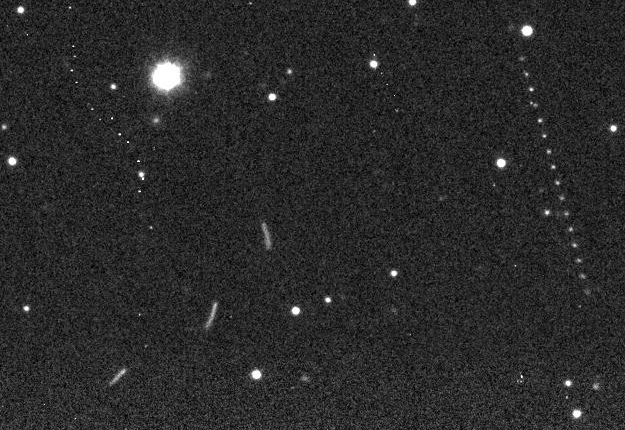 24 hours on one image

The composite image (keogram) was created from 704 narrow vertical strips of consecutive images of the same scene during one day (Dec 26) in such a way that time progresses from left to right.
Hence the resulting image is a horizontal representation of time. From the composite image one can derive that duration of night is almost two times longer than day as the images were taken shortly after winter solstice.
Copyright: Tomas Trzicky, Lukas Ronge 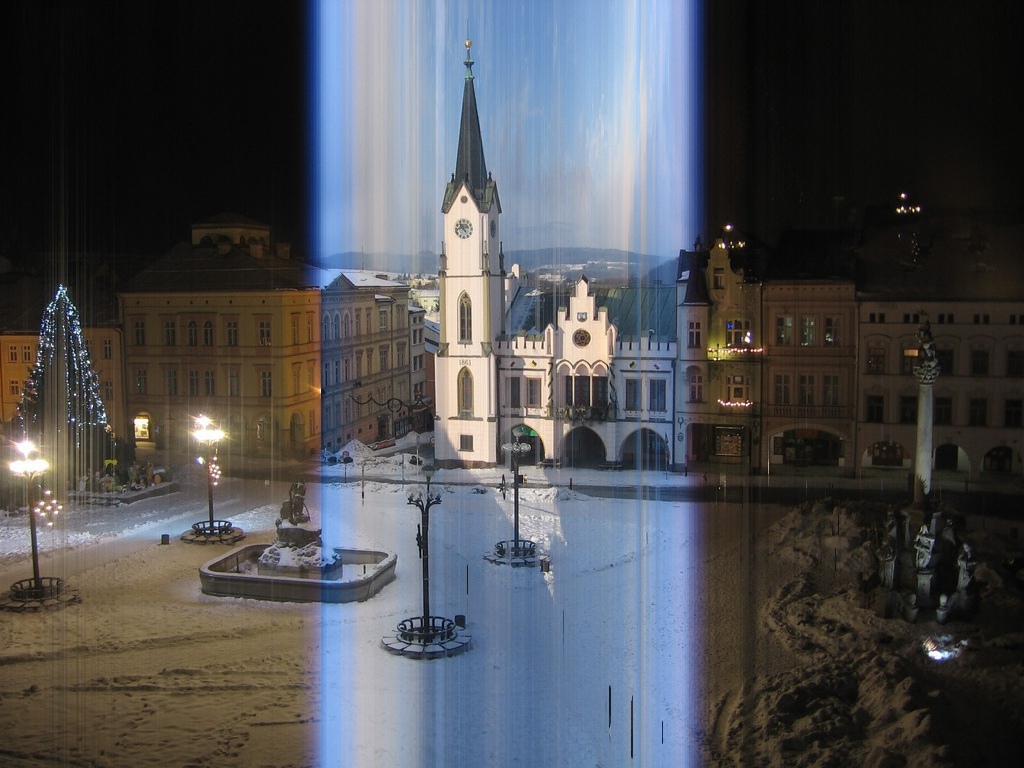 The images were taken approximately once per two minutes in Trutnov, Czech Republic.
Finally, short dark lines in the middle of the composite image are persons having the luck of being in the displayed strip in the right time of the day.

There is also a whole day video composed of keograms available at
http://www.youtube.com/watch?v=BNaZNVXIdqM
Top

My final New Year's image is...

This is my fifth consecutive year and all previous are here: http://maphilli14.webs.com/solarsystemreviews.htm

This was Venus’ year beyond a doubt. There was a transit that I was able to view and share with the world on our marathon Virtual Star Party. For me it was extra sweet as I added some seasoning to the Year of Venus with a wide field nestled in M45 Pleiades and a false color shot in InfraRed and UltraViolet. For these yearly reviews that I’ve been doing since 2008 (Inspired by Mike Salway) I have always tried to pick the best single photo of a subject and represent it as a sort of mock up solar system family photo. I felt like having three shots of Venus broke this standard I hold myself to. I decided that the transit alone wasn’t enough to break this. What forced my hand is that Venus is “the Roman goddess whose functions encompassed love, beauty, sex, fertility, prosperity and victory.” (http://en.wikipedia.org/wiki/Venus_(mythology))

What made this fact important to me? Well if you know me, my fourth child was born mere weeks after the transit. Somehow it seemed fitting that my personal live overflowed into the grandness of this event. Somehow these events blended a busy and energetic year for me and it stuck, a trifecta of Venus to sweeten 2012’s photo!

Other amazing things that rounded out my personal year were being featured in Google’s Virtual Star Party featurette as well as having the illustrious, Chris Go visit my house with many other local amateur Astronomers for a warm get together, the day after Google visited!

For the rest of the year’s fun, I found a love of the small things in the solar system this year. I captured a record number of non-planets too. Two comets, and four asteroids and two dwarf planets. I had the pleasure of photographing Eros near it’s closest approach during a Google+ hangout with Dr. Pamela Gay! Later it turns out that there was another asteroid lurking in the same field! Yes a two for one with Eros and Tyche at the same time!

While I missed Mercury this year, I got Pluto which has been missing for me since 2009.

I had lofty goals of shooting Eris, the Pluto killer, but perhaps this is a 2013 goal now.

Noteworthy is that this composite photo consists of 17 separate observing sessions. New objects not photographed for me before were, both Phobos and Diemos on the Mars opposition, as well as Eros, Tyche, Libera (a unplanned surprise near some galaxy clusters), both comets, and the grand Venus transit, which I missed with my 1st child in 2004!!!

Here’s the full list of images, some of which I will need to individually post in the coming months of 2013:

Hello again everybody, I'd like to submit an image of the December 28th Full Cold Moon rising over Prague in the Czech Republic for consideration. Thanks for looking!

At this winter time M45 is high in the nightsky, so it is a good targed to shot. In this image -a crop from Merope´s Molecular Dust Cloud-
we tried to achieve a original framing to center atention on the Dust Cloud. It is an RGB process, with diferencial stretching and recursive
saturation technique for the Cloud enhancement. 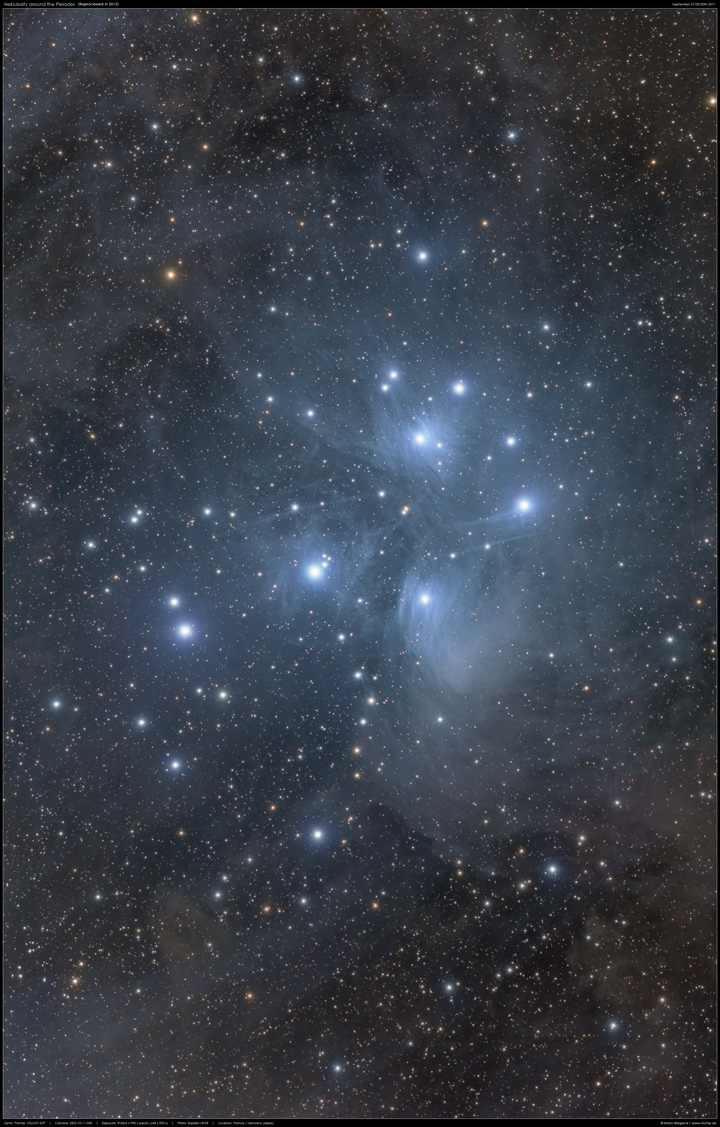 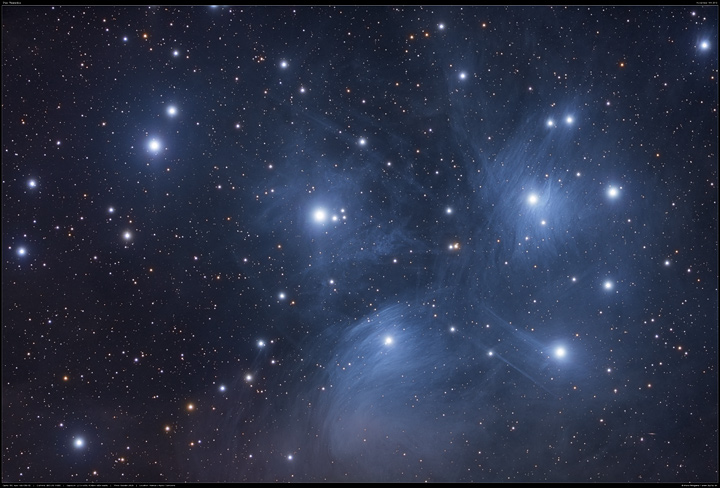 
The center of the heart
[attachment=0]heartMario.jpg[/attachment]
http://www.skytrip.de/deepsky/ic1805-2012-11-15c.jpg
Larger
Full resolution 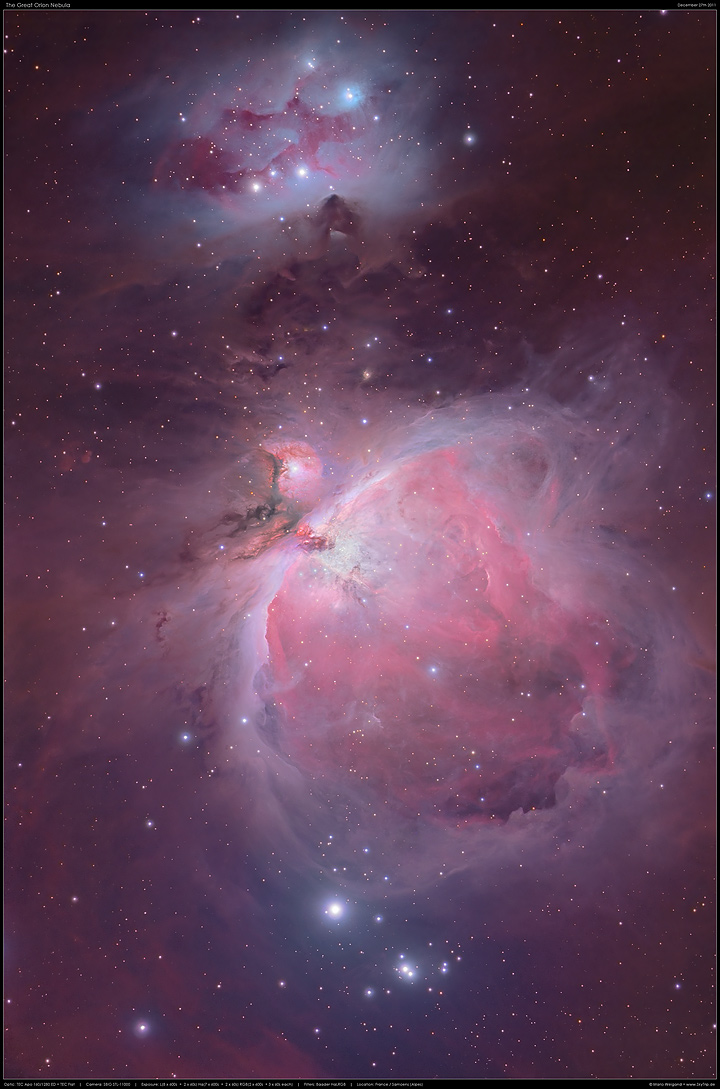 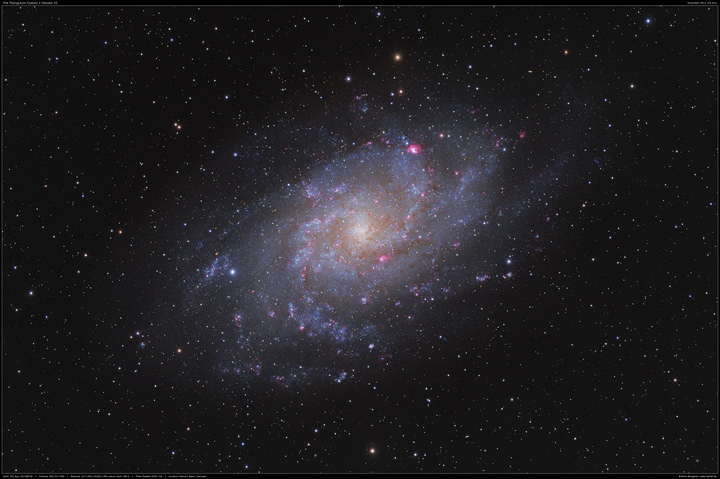 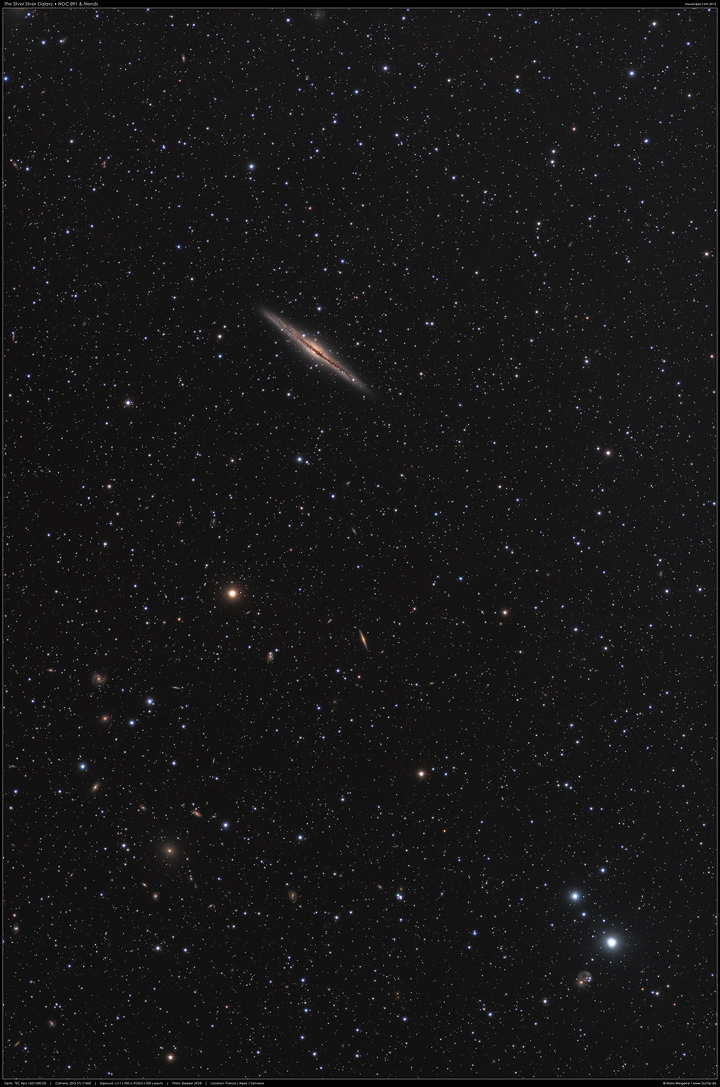 Mario
You do not have the required permissions to view the files attached to this post.
Last edited by owlice on Sun Dec 30, 2012 7:36 pm, edited 1 time in total.
Reason: Attached smaller image for faster downloading for the heart; left link to larger image. Thanks for sharing!
Top

A cooperation between J-P Metsävainio and myself. He processed the data of my Melotte 15 image using his tone mapping technique, resulting in this detailed image of the Melotte 15 cluster and the dust structures near it...