Explanation: Each day on planet Earth can have a serene beginning at sunrise as the sky gently grows bright over a golden eastern horizon. This sunrise panorama seems to show such a moment on the winter morning of February 15. In the mist, a calm, mirror-like stretch of the Miass River flows through the foreground along a frosty landscape near Chelyabinsk, Russia. But the long cloud wafting through the blue sky above is the evolving persistent train of the Chelyabinsk Meteor. The vapor trail was left by the space rock that exploded over the city only 18 minutes earlier, causing extensive damage and injuring over 1,000 people. A well-documented event, the numerous webcam and dashcam video captures from the region soon contributed to a reconstruction of the meteor's trajectory and an initial orbit determination. Preliminary findings indicate the parent meteoroid belonged to the Apollo class of Earth crossing asteroids.

Ya know... one has to be a bit careful about pronounceing -Miass-.

And congrats to Marat for makeing multiple APODS. I'll bet he was glad he got up early to take those pictures.

MargaritaMc has already posted this picture here, in the thread discussing the Russian meteor. Margarita thought it was a beautiful picture, and it is, indeed. It shows us a cold, clear morning with no wind, where morning mist is rising from the mirror-perfect surface of the river. And the Sun is rising behind a tree, which mitigates its golden glare. It's so perfect, so clean and clear, so calm.

And then there is that amazing cloud formation in the sky, the reminder of a totally unexpected, violent visitor from space which plunged to its "death" on this beautiful winter morning over Chelyabinsk.

... and spelling too! meteoriod?
Top

This meteoroid gave me an idea. Why couldn't we use self healing lasers to reach out and touch these rocks at long distances? Supposedly they don't dissipate for very long distances. http://physicsworld.com/cws/article/new ... nd-corners we could start moving it much earlier and with curved beams they could even hit directly from the side to deflect the orbit. The people of the planet could all work together at the same time if needed.

The other possibility is that we could heat up the rock so that when it enters our atmosphere it quickly becomes liquid, flattens, and then particulates rapidly dissipating into a gas. There would be an explosion but we could escape direct impact in the ocean or land. Warnings could be given before hand if it was known the trajectory. Only problem left is detection.

Unless the force of the light just wouldn't be enough at the distances or the heat would dissipate too rapidly. It could also be part of a combined effort like a satellite impact.
Top

Amazing picture, capturing at the same time the sunrise and track of the meteor! Well shot.

First off, I vote we need to hold a contest for an official name to actually call this meteor/meteroid/meteorite!

That's pretty amazing really when one ponders it. That is, wherever one is on Earth, whether viewing our common 'sunrise, or sunset', one is in a relative central point on our common planet Earth!

So, what's the composition of the vapor trail? If it's water vapor, is it terrestrial or is it from the meteoroid? Is it rock dust, vaporized during entry and resolidified in the cold upper atmosphere? Knowing that might provide some clue to the nature of the intruder.
Virgil H. Soule
Top

A most beautiful picture indeed! 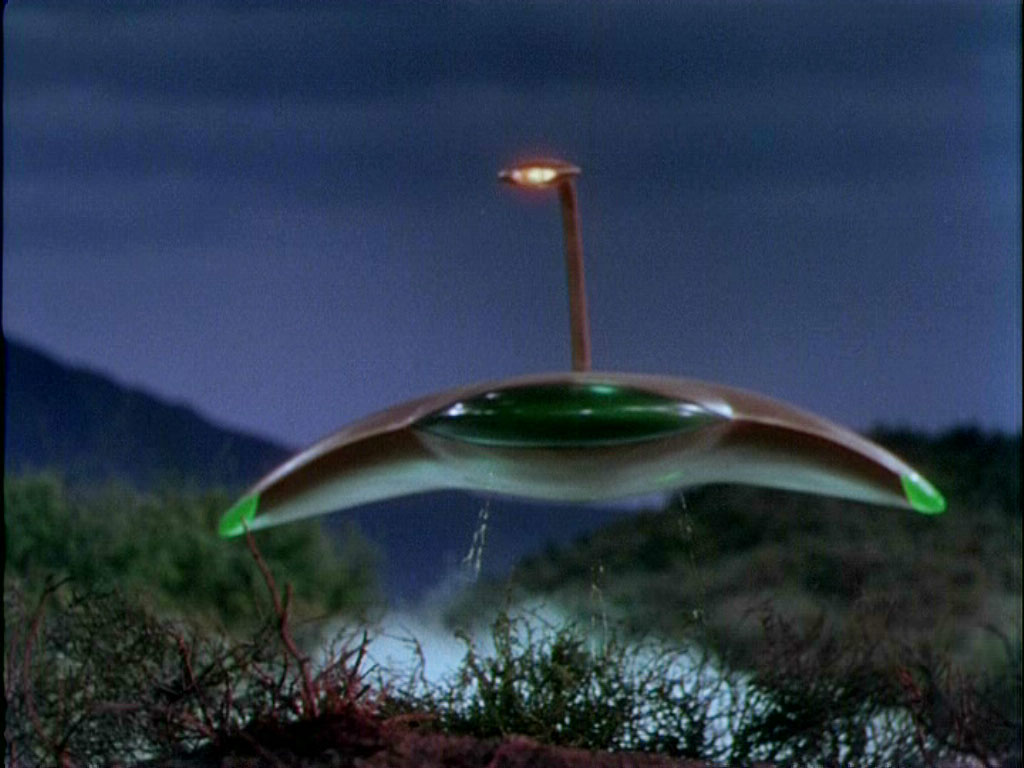 Guest wrote:First off, I vote we need to hold a contest for an official name to actually call this meteor/meteroid/meteorite! :D

Most people are calling the event the Chelyabinsk meteor, because that's the city that was directly under the terminal explosion and where the ground damage was most severe. I think it's likely that name will stick. The meteorite will be named by the Meteoritical Society Nomenclature Committee, following its guidelines, which generally means naming it after the location where the first individual was recovered. I expect the meteorites will be called Chebarkul Lake.
Chris

zbvhs wrote:So, what's the composition of the vapor trail? If it's water vapor, is it terrestrial or is it from the meteoroid? Is it rock dust, vaporized during entry and resolidified in the cold upper atmosphere? Knowing that might provide some clue to the nature of the intruder.

The trail is mainly composed of dust. It appears whiter than most fireball trails, and there is speculation that it may contain an unusually high amount of water droplets. If so, that's most likely a consequence of the atmospheric conditions allowing for condensation on the dust particles, and probably not related to the water content of the parent body, or its composition in general.

The best evidence we have about the composition of the body comes from the recovered meteorites, which are of a fairly common type. Because the passage of the body through the atmosphere is well known, researchers who study meteoroid structure are certainly working on models for that. I expect some interesting papers will emerge over the next few months describing some of the bulk properties of the parent meteoroid based on entry simulations.
Chris

Actually, there are some ambiguities in these definitions, which is why they have been under discussion for a few years by the IAU.

There is no completely agreed upon name for the body itself while it is burning in the atmosphere. Some use meteor (which overlaps with the formal definition that the meteor is the visual phenomenon), and others use meteoroid, which overlaps with the body while still in space. I refer to the burning body itself as the meteoroid, to distinguish it from the meteor effect. However, the last I heard, the IAU is considering defining "meteor" to include the physical body, as well as the burning trail effect.

Similarly, there is no completely agreed upon definition for when a body actually becomes a meteorite. While the definition suggests a body on the ground, most people also use the term for the cool surviving bodies from a meteor once they are in dark flight. That is, we commonly speak of "meteorites" when describing the path they take while still in the air, where it is certain they will survive to the ground.
Chris

Considering that it intersected the Earth, I'd say "earth-crossing asteroid" is a safe label.
Top

Steve Dutch wrote:Considering that it intersected the Earth, I'd say "earth-crossing asteroid" is a safe label.

It is, but the caption qualified that with "Apollo class", which is only known because of the reconstruction of the orbit. There are other classes of Earth-crossing asteroids and meteoroids. This body didn't have to be an Apollo.
Chris

The meteoroid struck at 9:12 or so in the morning, not at sunrise. It is unlikely that the cloud in the photo is from the meteoroid.
Top

WoW, Ann, your posts are riseing to meteoric proportions

Phil P wrote:The meteoroid struck at 9:12 or so in the morning, not at sunrise. It is unlikely that the cloud in the photo is from the meteoroid.

Sunrise at Chelyabinsk on February 15 was at 9:17. It is absolutely certain that the cloud is the meteor trail, since this photographer captured an entire sequence of images, beginning with the actual fireball and following the evolution of the smoke trail.
Chris

I stand corrected, Chris. Sunrise was at 9:16 am according to ephemeris table I looked up. Most of the video from the city show that it's fairly bright out, so it seemed well past sunrise.
Top

This photo is artfully composed and would be beautiful under any circumstances. The fact that the cloud across the upper third of the image is the dust trail of a large meteor makes this a truly phenomenal picture. Kudos to the photographer Marat Ahmetvaleev, and thanks to the apod editors for posting it. I wonder how much of the composition was intentional, and how much was serendipitous.
May all beings be happy, peaceful, and free.
Top

Chris Peterson wrote:
Most people are calling the event the Chelyabinsk meteor, because that's the city that was directly under the terminal explosion and where the ground damage was most severe. I think it's likely that name will stick. The meteorite will be named by the Meteoritical Society Nomenclature Committee, following its guidelines, which generally means naming it after the location where the first individual was recovered. I expect the meteorites will be called Chebarkul Lake. 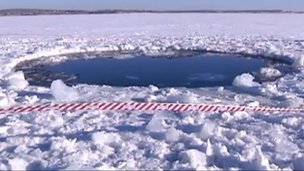 <<Divers working at a Russian lake have recovered a half-tonne chunk of the space rock that exploded over Chelyabinsk earlier this year. The object plunged into Lake Chebarkul in central Russia on 15 February, leaving a 6m-wide hole in the ice. Scientists say that it is the largest fragment of the meteorite yet found. More than 1,000 people were injured when a 17m, 10,000-tonne space rock burned up over Central Russia, breaking windows and rocking buildings.

Live footage showed a team pull out a 1.5-metre-long rock from the lake after first wrapping it in a special covering and placing it on a metal sheet while it was still underwater. The fragment was then pulled ashore and placed on top of a scale for weighing, an operation that quickly went wrong. The rock broke up into at least three large pieces as it was lifted from the ground with the help of levers and ropes. Then the scale itself broke, the moment it hit the 570kg mark. 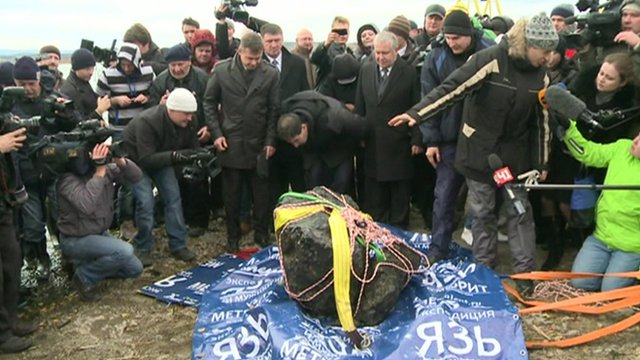 Dr Caroline Smith, curator of meteorites at London's Natural History Museum, confirmed that the object was a meteorite from characteristic features known as fusion crust and regmaglypts, which are obvious in images. She told BBC News: "Fusion crust forms as the meteoroid is travelling through the atmosphere as a fireball. The outer surface gets so hot it melts the rock to form a dark, glassy surface crust which we term a fusion crust. Regmaglypts are the indentations, that look a bit like thumbprints, also seen on the surface of the meteorite."

Sergey Zamozdra, an associate professor at Chelyabinsk State University, told the Interfax news agency: "The preliminary examination... shows that this is really a fraction of the Chelyabinsk meteorite. "This chunk is most probably one of the top 10 biggest meteorite fragments ever found."

The divers' mission had been hampered by a number of factors. The rock fragment lay at 13m depth, not 6m or 8m as was originally thought. The Vesti 24 rolling news channel reported that divers had already recovered more than 12 pieces from Lake Chebarkul since the incident on 15 February. The station said that only four or five of them had turned out to be real meteorites.