Comments and questions about the APOD on the main view screen.
34 posts

Explanation: What happens when two galaxies collide? Although it may take over a billion years, such titanic clashes are quite common. Since galaxies are mostly empty space, no internal stars are likely to themselves collide. Rather the gravitation of each galaxy will distort or destroy the other galaxy, and the galaxies may eventually merge to form a single larger galaxy. Expansive gas and dust clouds collide and trigger waves of star formation that complete even during the interaction process. Pictured above is a computer simulation of two large spiral galaxies colliding, interspersed with real still images taken by the Hubble Space Telescope. Our own Milky Way Galaxy has absorbed several smaller galaxies during its existence and is even projected to merge with the larger neighboring Andromeda galaxy in a few billion years.

I think somebody needs to give some credit to Josh Barnes and John Hibbard at the University of Hawaii for their algorithm which streamlined modeling the collision of the "The Mice" (NGC 4676) and other complex galactic interactions. http://www.ifa.hawaii.edu/~barnes/resea ... on_models/
Top

Brilliant display and work. Still thoroughly enjoying APOD and never miss one for if I am away, I just time travel back along their world line.

Snipped:
"Expansive das and dust clouds collide...."
Can you pick it? Or perchance I am wrong and there lies a new term I have not come across previously?

Still, that is not the main reason for posting - the impressive work of the simulation and matching is.

But if everything is flying apart how can they collide?
Top

tannaberton wrote:But if everything is flying apart how can they collide?

Not everything is "flying apart". If you mean the expansion of the universe, it happens on a much larger scale (on the scale of superclusters of galaxies). On the scale of a few million light years (which is small compared to the size of the observable universe) this expansion plays no role and two galaxies can collide.
Top

Awwwww.....seeing two galaxies in love is so cute!

This is a pretty awesome simulation. I really like how the perspective changes, and the addition of the Hubble images makes it more 'real-looking'.

the algorithm seems to be sufficiently accurate to enable simulation and study of binary planet systems in which primary and secondary bodies orbit each other sufficient close that both planets are locked in synchronous orbit about each other. on such a planetary system, the same side of both planets would permanently face the same side of the other. pluto and its moon are an example for such a case. however, earth-sized terrestrial planets in the goldilocks zone are to be studied. a geo-mechanical question involving such system: what is the nearest that the two bodies can occur while retaining a perfectly spherical shape (without distortion).
an algorithmic example of such a system:
primary: mass 4.5x10e21 ton ; diameter 11900 km
secondary: mass 5.3x10e20 ton ; diameter 5500 km
distance between primary and secondary: 75000 km
distance of binary planet to parent star: approximately 191 million km
mass of parent star: 0.91 sun ; spectral class of star: G

in fact, binary planetary systems such as this ought to be very common. one aspect of such a system is that both planets should be endowed with a substantial atmosphere. another aspect is that the north-south polar alignment of each planet should be magnetically and geometrically linear ( n-s - - - n-s). this would imply that the region in which each planet faces the other would be characterized by substantial aurora.
artists of fantasy planets have been speculating about binary systems in their work. their portrayal of 'fantasy' alien planets may not be such a fantasy.
Top

Great video! I assume the simulation is a result of a highly refined algorithm that, once ready, they simply "turned on" and "let run" without interference. In that case, getting such a close match between the model and the documented observations must be very difficult and is to be commended...
Top

The Explanation contains "...Milky Way Galaxy has absorbed several smaller galaxies..." however, the referenced http://apod.nasa.gov/apod/ap080619.html states that the evidence "supports the cosmological scenario...." It is not necessarily a fact that our galaxy has absorbed several smaller galaxies, just that observations of other galaxies support that scenario. It is highly probable, the possibility exist, but we have yet to find any evidence to support that statement with regard to the Milky Way.
There is a subtle difference between a statement of fact and scientific observations that support a scenario.
--
Obquote: "Dammit Jim, I'm a proofreader, not an editor!" - Dr. McCoy (attrib)
Top

One of the things about APOD and astronomy in general that astounds me is that we can make a short video that contains a few galaxies. Contained within the video are trillions of stars and maybe trillions or hundreds of trillions of species. How wondrous and magnificent is our universe?!
Beautiful sim with exceptional accuracy. The individuals involved in this project are amazing.
Top

This is impressive and beautiful. A couple of thoughts:

The overall shapes of the simulation resemble those of the photographed galaxies, but all the real galaxies seem to have much broader and more diffuse halos of stars and gas than is shown in the simulation. I wonder how many more ones and zeros it would take to simulate the halos.

I'm also curious how much dark matter had to be factored into the simulation to get it to work like the real thing.
May all beings be happy, peaceful, and free.
Top

tannaberton wrote:But if everything is flying apart how can they collide?

The entire universe is expanding, so galaxy clusters at great distances from one another are moving apart from one another, as evidenced by the fact that the farther a distant galaxy is from us, the more its light is shifted toward the red end of the spectrum. But within this cosmic expansion, gravity still works over closer distances, so galaxies that are close to one another often become gravitationally attracted to one another and fall into one another's arms, as shown in the video. The light from a galaxy that is moving toward us will be shifted toward the blue end of the spectrum.

As mentioned in the caption, our Milky Way galaxy and the nearby Andromeda galaxy ("only" 2.5 million light years away) are falling toward one another and will merge in about 5 billion years.
May all beings be happy, peaceful, and free.
Top

That's true, but outside the Local Group, I don't think there are any galaxies that are moving towards us. All other galaxies are redshifted.
Chris

Thanks Chris. This illustrates the general point that distant galaxies are moving apart from one another due to cosmic expansion, while galaxies that are close to one another, like those in our own little local group of 40 galaxies, can move toward one another because of gravitational attraction.
May all beings be happy, peaceful, and free.
Top

That's not quite true, Chris. There are a few Virgo galaxies which are moving towards us because their internal movement in our directions inside the cluster is greater than the cluster's overall motion away from us. I believe that M90 is an example of such a blue-shifted Virgo galaxy.

Anthony Barreiro wrote:
The light from a galaxy that is moving toward us will be shifted toward the blue end of the spectrum.

<<Messier 86 (distance: 52 Mly) is an elliptical or lenticular galaxy in the constellation Virgo. It was discovered by Charles Messier in 1781. M86 lies in the heart of the Virgo Cluster of galaxies and forms a most conspicuous group with another giant, Lenticular Galaxy M84. It displays the highest blue shift of all Messier objects, as it is approaching the Milky Way at 244 km/s. This is due to its falling towards the center of the Virgo cluster from the opposite side, which causes it to move in the direction of the Milky Way.

Messier 86 is linked by several filaments of ionized gas to the severely disrupted spiral galaxy NGC 4438 and shows some gas and interstellar dust that may have been stripped, as well as the gas on those filaments, of it. It's also suffering ram-pressure stripping as it moves at high speed through Virgo's intracluster medium, losing its interstellar medium as it moves through it leaving behind a very long trail of hot gas.

Messier 86 has a rich system of globular clusters, with a total number of around 3,800. Its halo also has a number of stellar streams interpreted as remmants of dwarf galaxies that have been disrupted and absorbed by this galaxy.>>

If we folks are this clever, how is it we can do this for galaxies but not our planet's economy ?
Top

Guest wrote:If we folks are this clever, how is it we can do this for galaxies but not our planet's economy ?

Because the mathematics behind galaxy collisions is much, much simpler than that behind even local economics, let alone the world economy.
Chris

Guest wrote:
If we folks are this clever, how is it we can do this for galaxies but not our planet's economy ?

Because the mathematics behind galaxy collisions is much, much simpler than that behind even local economics, let alone the world economy.

<<The basic idea of the Laffer Curve is that there is a nice smooth curve of tax rate and revenue return. At the extremes this makes sense. If you are taxed at 1% then increasing it to 2% isn’t going to make any difference to the amount people work, so the tax take by the government goes up. Clearly, if you tax at 100% and then reduce it, the amount of tax the government gets goes up.

So far, so good. The problem is that then people move to say that there is an ‘optimum tax rate’ ie, that there is level of tax where reducing the tax rate can counter-intuitively increases the tax take. So does it work in real life? 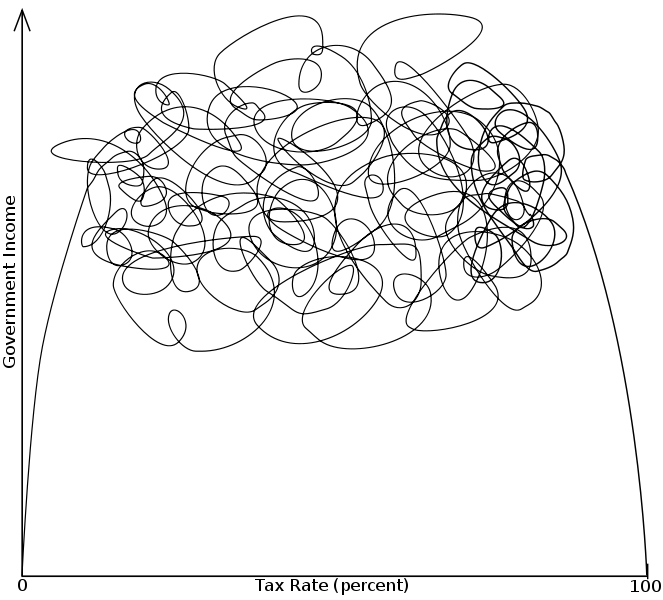 Basically, no. It is rubbish. Martin Gardener did an excellent demolition job on it shortly after it was first thought up, coming up with his ‘Neo-Laffer Curve’. The assumption, that the curve is smooth with one only one peak, is clearly wrong and there are many other factors at play. It also assumes that all people are completely economically rational, and the only thing that they care about is money.