Explanation: On September 6, a starry night and the Milky Way witnessed the launch of a Minotaur V rocket from NASA's Wallops Flight Facility on Wallops Island, Virginia. So did a large part of the eastern United States, as the spectacular night launch was easily visible even from light polluted urban areas. This 35 second exposure captures part of the rocket's initial launch streak and 2nd stage ignition flare along with a brilliant reflection of the fiery sky in calm waters. The stunning view faces south and west from a vantage point overlooking Sinepuxent Bay in Maryland about 20 miles north of the launch pad. Heading east over the Atlantic, the multi-stage rocket placed LADEE, the Lunar Atmosphere and Dust Environment Explorer, into a highly elliptical Earth orbit to begin its journey to the Moon.

What a gorgeous photo! The weather cooperated perfectly.
Top

The caption does not give the TIME of the launch. I missed it (didn't know when it would be). Was it at a convenient early evening time?
Top

haha wrote:
The caption does not give the TIME of the launch. I missed it (didn't know when it would be). Was it at a convenient early evening time?

Years ago, I was lucky enough to witness an early morning rocket launch from Wallops from Hampton, VA. At first it seemed to be a star brighter than Venus that was slowly ascending. As I watched, it seemed to grow a triangular tail of white dots, then accelerated upward and was eventually obscured by clouds. It took me a while to identity it because Wallops had not announced a launch. I learned a lot about UFO sightings in that time--each person I talked to confidently identified it for me according to his or her own experience. My mother, a UFO enthusiast, talked about sightings of the same UFO all over the country (though none of them sounded like what I saw), a coworker who was formerly a military pilot was certain that it was sunlight reflecting off the fuselage of a high altitude airplane, a professor who taught astronomy at my university knew it to be a fireball that was coming in at such an angle that it seemed to be going up when it was in fact coming down, and the MUFON investigator in Richmond couldn't wait to use his new software to tell me which satellite I'd seen. When I finally called Wallops, they informed me that it was in fact, a rocket launch from their facility, but they had not announced it because it carried a classified payload. Only when I gave them the date and time would they confirm the launch.

So. . . not a UFO but still one of the most fascinating and exciting things I'd ever seen.
Top

deebrown wrote:So. . . not a UFO but still one of the most fascinating and exciting things I'd ever seen.

Well, it was a UFO until you finally identified it, right?
Chris

deebrown wrote:
So. . . not a UFO but still one of the most fascinating and exciting things I'd ever seen.

Well, it was a UFO until you finally identified it, right?

That depends upon one's definition of UFO:


http://en.wikipedia.org/wiki/Unidentified_flying_object wrote:
<<An unidentified flying object, or UFO, in its most general definition, is any apparent anomaly in the sky (or near or on the ground, but observed hovering, landing, or departing into the sky) that is not readily identifiable as any known object or phenomenon by visual observation and/or use of associated instrumentation such as radar.

In popular usage the term UFO came to be used to refer to alien spacecraft and because of the public and media ridicule associated with the topic, some investigators prefer to use such terms as unidentified aerial phenomenon (or UAP) or anomalous phenomena, as in the title of the National Aviation Reporting Center on Anomalous Phenomena (NARCAP).>>

4) The person observing it can't identify it.
Chris neufer wrote:
That depends upon one's definition of UFO:

4) The person observing it can't identify it.

It's funny how the less we know about an object in the sky the more likely it will be declared an alien craft. You'd think we'd want to know a whole lot about such an object before supposing it's extraterrestrial.
Just call me "geck" because "zilla" is like a last name.
Top

geckzilla wrote:It's funny how the less we know about an object in the sky the more likely it will be declared an alien craft. You'd think we'd want to know a whole lot about such an object before supposing it's extraterrestrial.

I'm wondering the same thing. Come on rocket scientists, enlighten us.
May all beings be happy, peaceful, and free.
Top

I suppose if you had the energy to waste, you could use any arc (or roller coaster inspired path) to get there.
Just call me "geck" because "zilla" is like a last name.
Top

geckzilla wrote:
I suppose if you had the energy to waste, you could use any arc (or roller coaster inspired path) to get there. <<A rocket sled launch is a method of launching space vehicles. A rail or maglev track and a rocket or jet booster is used to accelerate a sled holding a vehicle up an eastward facing mountain slope. Substantial fuel savings can be gained since the spacecraft does not need to use its engines for the initial acceleration, allowing a single-stage-to-orbit reusable vehicle.

Effectively a 'sky ramp' would make the most expensive, first stage of a rocket fully reusable since the sled is returned to its starting position, to be refueled and may be reused in the order of hours after use. Present launch vehicles have performance-driven costs of thousands of dollars per kilogram of dry weight; sled launch would aim to reduce performance requirements and amortize hardware expenses over frequent, repeated launches. Designs for mountain based inclined rail 'rocket' sleds often use jet engines or rockets to accelerate the spacecraft mounted on it. Electromagnetic methods (such as Bantam, Maglifter, and StarTram) are another technique investigated to accelerate a rocket before launch, potentially scalable to greater rocket masses and velocities than air launch.

NASA studies have shown that the Space Shuttle uses more than a third of its fuel just to reach 1,000 mph. If a rocket was already moving at launch, with corresponding reduced propellant needs, a greater fraction of liftoff mass could be payload and hardware.

Due to factors including the exponential nature of the rocket equation and higher propulsive efficiency than if a rocket takes off stationary, a NASA Maglifter study estimated that a 600 mph launch of an ELV rocket from a 3000 meter altitude mountain peak could increase payload to LEO by 80% compared to the same rocket from a conventional launch pad. Mountains of such height are available within the mainland U.S. for the easiest logistics, or nearer to the Equator for a little more gain from Earth's rotation. Among other possibilities, a larger SSTO could be reduced in liftoff mass by 35% with such launch assist, dropping to 4 instead of 6 engines in one case considered.

At an anticipated efficiency close to 90%, electrical energy consumed per launch of a 500-ton rocket would be around 30 GJ, 8000 kilowatt hours (each kilowatt-hour costing a few cents at the current cost of electricity in the United States), aside from any additional losses in energy storage. It is a system with low marginal costs dominated by initial capital costs Although a fixed site, it was estimated to provide a substantial net payload increase for a high portion of the varying launch azimuths needed by different satellites, with rocket maneuvering during the early stage of post-launch ascent (an alternative to adding electric propulsion for later orbital inclination change). Maglev guideway costs were estimated as $10 – $20 million per mile in the 1994 study, which had anticipated annual maglev maintenance costs on the order of 1% of capital costs.>> 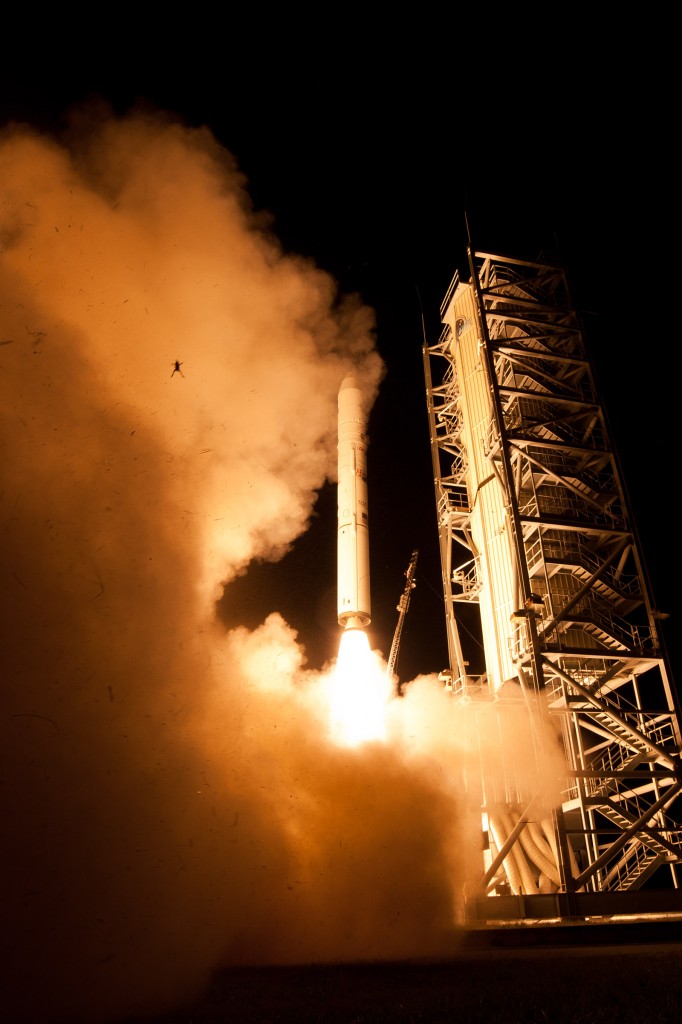 [b][color=#0000FF][size=135]An unfortunate frog at the launch of LADEE from the Wallops Island Flight Facility in Virginia on September 6, 2013. Credit NASA/Wallops/Mid-Atlantic Regional Spaceport[/size][/color][/b]

<<Oh my! We’re not sure to laugh or cry on this one (maybe both). This frog gives new meaning to “flying leap,” (or giant leap). This little guy was obviously startled by the ignition of the Minotaur V rocket that launched the LADEE spacecraft last Friday.

We’ve confirmed this image is in fact an actual photo taken by one of NASA’s remote cameras set up for the launch on September 6, 2013 from the Wallops/Mid-Atlantic Regional Spaceport. Wallops spokesman Jeremy Eggers confirms the picture is legitimate and was not altered in any way.

Why would a frog be hanging around a launchpad? The launchpad at the Wallops/Mid-Atlantic Regional Spaceport has a “pool” for the high-volume water deluge system that activates during launches to protect the pad from damage and for noise suppression, and likely there was a (formerly) damp, cool place that was a nice spot for a frog to hang out.>>

Who said that wishes would be heard and answered
when wished on the morningstar?
Someone thought of that and someone believed it.
Look what it's done so far.

What's so amazing that keeps us stargazing
and what do we think we might see?
Someday we'll find it, the rainbow connection.
The lovers, the dreamers and me.
Art Neuendorffer
Top

The green stuff above = Ode to the unknown flying frog.
To find the Truth, you must go Beyond.
Top

Re: Plunk Your Magic Twanger, Froggy!

Goodnight, sweet prince...
Just call me "geck" because "zilla" is like a last name.
Top

There's nothing beautiful about $280 million flushed down the toilet. That money should have been spent on health and disease prevention research by the FDA. LADEE is just another NASA boondoggle, trying to justify its existence. NASA desperately wants manned missions to Mars or back to the Moon. Neither will ever be funded by the US taxpayer.
Top

fatcitymax wrote:
There's nothing beautiful about $280 million flushed down the toilet.
That money should have been spent on health and disease prevention research by the FDA.

And what exactly would you have the FDA do with that 88¢ per person?
Art Neuendorffer
Top

Anything they would want to do with it would be better than having it spent on moon dust. The sooner NASA is shut down the better for the US. NASA has no relevant mission. It is just a self-serving bureaucracy. This is the golden age of biology. That is were NASA's budget should be spent.
Top
36 posts