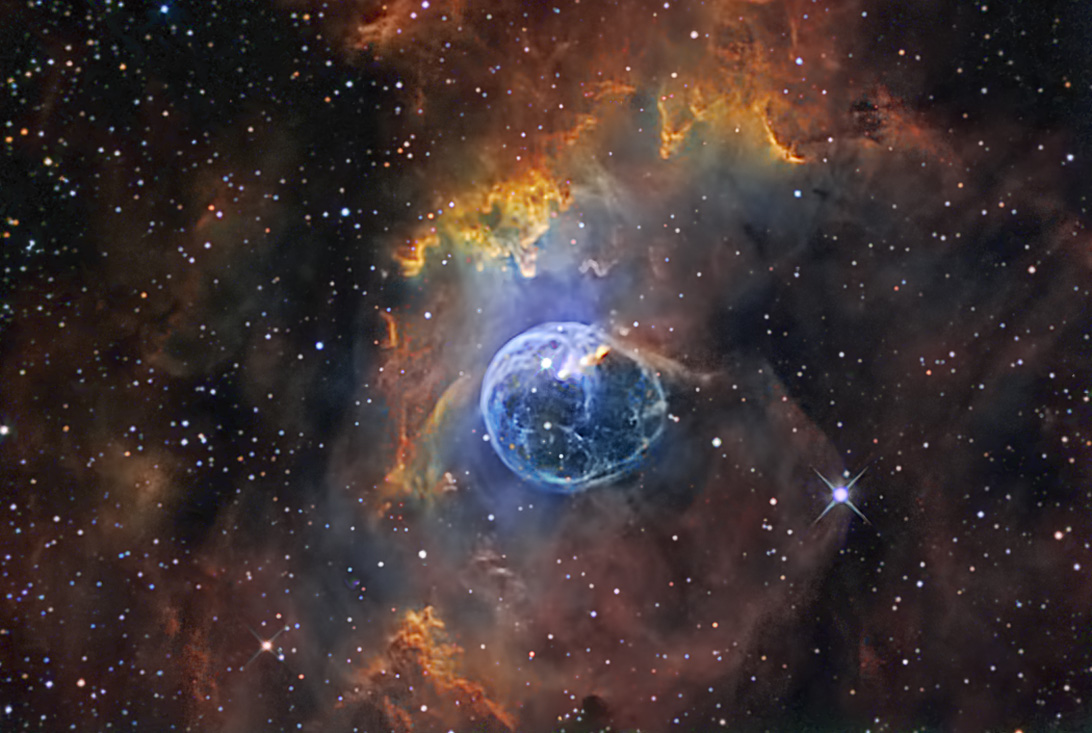 
http://lascaux.asu.cas.cz/m/apod-c/trace.jpg
trace.jpg
http://lascaux.asu.cas.cz/m/apod-c/venus.jpg
venus.jpg
Martin Jelínek
images I obtained last two nights while observing at the Nordic Optical Telescope at Roque de los Muchachos, La Palma, Spain.
One is a satelite trace nicely caught across the Milky Way, I was doing a time lapse and it was a serendipitious catch (27/ix/2013 20:48UT).
The other is the Milky Way and Venus at the beginning of the night (red trace can still be seen on the horizon), with Venus's light bouncing from the surface of the Atlantic Ocean (this was 28/ix/2013, 19:20UT).
I use to do images for pure pleasure of having a nice picture, and did not really think of publishing them anywhere, but since I have seen reactions of people to which I have shown them, I gained confidence to try and submit. Still I have a feeling you might have loads of similar stuff. 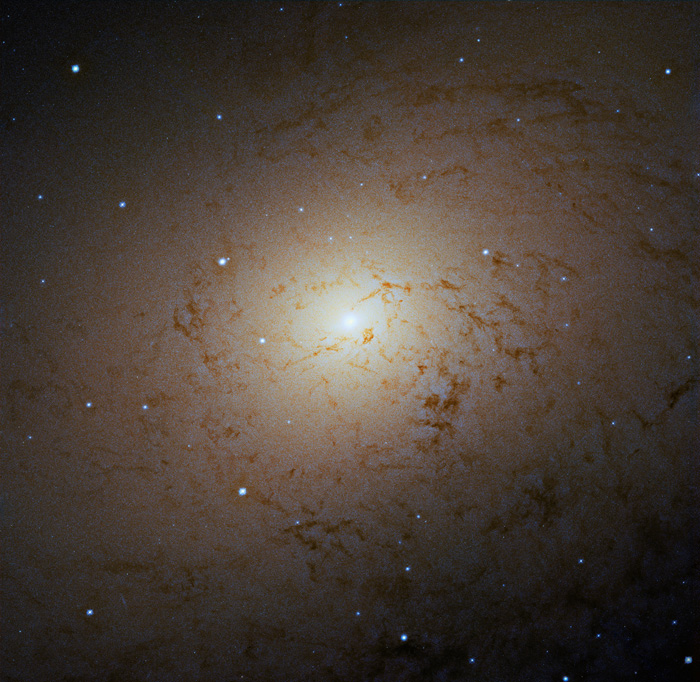 Pacman_LRGB.jpeg
Albert Barr
Here's a 10 hour LRGB of the Pacman imaged in Mayhill NM over the past two nights.

2012 DA14 spleiades.jpg
David Finlay
@clearskiestv
https://twitter.com/ClearSkiesTV
attached is my image of asteroid 2012 DA14 taken during closest approach on Feb 16th. It is seen passing by IC2602, the Southern Pleiades. It was taken from a small country town called Jamberoo, south of Wollongong, NSW, Australia.
I haven't seen many photos of DA14, at least none where you can distinguish it from other points of light in the sky, but on this occasion a 90 second exposure shows its apparent motion against the stars. I had thought every person with a telescope would have been up that night taking images of the asteroid, however this image appears to be quite unique.
It is for this reason that I would like to submit the photo to APOD.
It was frightening to watch how quickly this object was moving; knowing the whole time the motion and brightness were due to its size, speed and closeness to our precious planet. While I like chasing unique astronomical events, I'd prefer never to have to see another asteroid this close again!
If you use this image could you please give me credit as the photographer and a link to my twitter account. Thanks!
You do not have the required permissions to view the files attached to this post.
Top

From the Wall to the Pelican in Hubble palette

Shot in the Netherlands with a C11 Hyperstar.

Combine_Crop-L.jpg
High-res
You do not have the required permissions to view the files attached to this post.
Top

clouds in the east at sunset
266.jpg
the harvest moon
265.jpg
You do not have the required permissions to view the files attached to this post.
Last edited by Rothkko on Wed Oct 02, 2013 6:19 am, edited 1 time in total.
Top

el beso. iridiscence
267.jpg
268.jpg
You do not have the required permissions to view the files attached to this post.
Top

Hi,
On Thursday early morning I observed and photographed the rising waning crescent Moon from Budapest, Hungary. Standing at the bank of river Danube the towers of Hungarian Parliament acted as spectacular foreground of the scene. When the picture was taken the age of the Moon was 44 hours and 51 minutes before New Moon phase. At one glance, one may think that this image is photoshopped or its a composite because it's simply impossible to see milky way galaxy at dusk. But what you're really seeing here is a single exposure shot of a rare phenomenon, known as Zodiacal Light (a.k.a. False Dusk), that I have captured during my recent trip to Mount Bromo in the Southern Hemisphere. Zodiacal light is best seen during Spring and Autumn and I chose to visit Mt Bromo a few days after Autumnal Equinox as I hope to capture the Zodiacal light along with the 3 planets, 3 volcanoes and a milky way galaxy. If I had visited Mount Bromo during Vernal Equinox, I will not be able to capture this rare phenomenon with the cones of the 3 volcanoes because the Zodiacal light would have appear before dawn, in the East.

This image was captured when the sun was around 15 degrees below horizon and the sky was reaching its astronomical darkness condition. That's why we were able to see the milkyway galaxy and the Zodiacal light also created a false dusk impression. During normal day, you will not be able to see the sunset colors at this time because the sky would have been completely dark! Zodiacal light appears as a faint light in this image coming from Mount Batok pointing towards the Milky Way Galaxy but it's actually pointing towards the pathway traveled by the Sun and Moon as they journey across our sky.

Zodiacal light is actually sunlight reflecting off dust grains that circle the sun in the inner solar system. These grains are thought to be left over from the process that created our Earth and the other planets of our solar system 4.5 billion years ago.

I also did a 6 hours timelapse for this amazing phenomenon.
Top 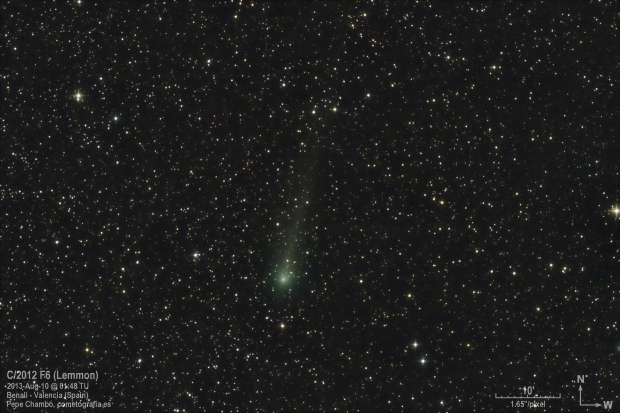 Description:
The comet C/2012 F6 Lemmon imaged on August 10, 2013. In spite of have moved away of Sun until 2,4 A.U. and shine with 10,5 magnitude, the comet still shows a magnificent appearance, More over, the closeness of Earth to its orbit plane do possible to see in this image a anti-tail about 0.5º long.

Data on the above astrobin link.

Antares is slowly going away, so here is one of the last shots this season of the wide-field between Antares and Corona Australis (just fitting into the frame).
You do not have the required permissions to view the files attached to this post.
Top

Comet ISON C/2012 S1 on October 3rd under above average conditions. Getting more impressive as time progresses. 7 x 4min. exp. (28min total)Equipment info on image.
You do not have the required permissions to view the files attached to this post.
Top

A little planetary nebula in Delphinus.

Best regards,
Cristina Cellini
http://www.mazzottiefigli.com/cfm2004/a ... c6905.html
You do not have the required permissions to view the files attached to this post.
Top

NGC 7000: The Cygnus Wall - Narrow Band SII:Ha:OIII
Narrow-Band image of the southern part of NGC7000, the "North America Nebula". The brightest structure shown in the left of the picture is also called the "Cygnus Wall".

NGC 7000: The Cygnus Wall - Hydrogen Alpha
B/W image of the above image taken with an Hydrogen Alpha Narrow Band Filter of 7 nanometers FWHM

Hello I am an Italian photographer, and 'the first time in this forum, I would like to participate in apod, and' this is the right situation?

Maurizio wrote:Hello I am an Italian photographer, and 'the first time in this forum, I would like to participate in apod, and' this is the right situation?

Yes, this is exactly where you want to be! Nice pic! Welcome aboard and thanks for sharing!
Know the quiet place within your heart and touch the rainbow of possibility; be
alive to the gentle breeze of communication, and please stop being such a jerk. — Garrison Keillor
Top

Here's my imaging project from this past week at the 2013 Okie-Tex star party. This is a 6-panel mosaic of the Perseus Molecular Cloud that spans from IC348 on the left, down past NGC 1333 on the right. I thought it was appropriate to capture such a dusty field from a location that was the epicenter of the Dust Bowl era in the 1930's in the United States.

My latest image, The Trifid Nebula.