Star Streams and the Whale Galaxy

Explanation: NGC 4631 is a spiral galaxy found only 25 million light-years away, toward the well-trained northern constellation Canes Venatici. Seen ege-on, the galaxy is similar in size to the Milky Way. Its distorted wedge shape suggests to some a cosmic herring and to others its popular moniker, The Whale Galaxy. The large galaxy's small, remarkably bright elliptical companion NGC 4627 lies just above its dusty yellowish core, but also identifiable are recently discovered, faint dwarf galaxies within the halo of NGC 4631. In fact, the faint extended features below (and above) NGC 4631 are now recognized as tidal star streams. The star streams are remnants of a dwarf satellite galaxy disrupted by repeated encounters with the Whale that began about 3.5 billion years ago. Even in nearby galaxies, the presence of tidal star streams is predicted by cosmological models of galaxy formation, including the formation of our own Milky Way.

That's a superb image of one of my favorite galaxies!

You can almost count the individual brilliant blue stars in it, as well as the large and small pink emission nebulas. And you can marvel at the incredible mess of the torn, tattered and phenomenally broken central dust lane. Humpty Dumpty, you've got nothing on the dust lane of NGC 4631!

Note the peanut-shaped yellow bulge of NGC 4631. We can tell that this is a barred galaxy.

The blue (and non-blue) gas streamers and tidal tails are fantastic, too. There is a long tail disappearing down to the right. But my favorite out-of-plane tidal features are the "breakers" above the disk of NGC 4631 to the right. They have formed to the right of where satellite galaxy NGC 4627 appears to be about to hit. Surf's up!!

Faint little dwarf galaxies can also be seen here. There is one at about 12 o'clock and another at about 7 o'clock.


I love the color balance of today's APOD, but other color balances are possible. In Matthew T. Russell's image at left, where the overall color balance is less blue, the satellite galaxy, NGC 4627, is now neutral-colored instead of blue. Fascinatingly, the neutral color might be the correct one. The B-V index of NGC 4627 is 0.630, and its U-B index is 0.100. Amazingly, that is almost exactly the same as the B-V and U-B index of the Sun!!! Okay, the Sun is a little less ultraviolet than NGC 4627.

It is probable that NGC 4627 underwent a tremendous burst of star formation some time in the past, but now all the brilliant blue stars have died, and only some A- and many F-stars remain from that blast from the past. And there are of course many old and red stars inside NGC 4627, too.

As for NGC 4631 itself, is a mature galaxy with a large yellow bulge whose entire disk is just popping with blue stars and recent and ongoing star formation. If anyone out there knows of another mature yellow-bulged galaxy whose disk is so brilliantly blue and pink and "unsettled" from fantastic star formation, please post the picture here! (NGC 4945? No. But maybe NGC 2442, although that galaxy isn't edge-on.)

Finally, I can't resist posting this picture of the possible interaction between NGC 4631 and the quite nearby NGC 4656. Unfortunately, I have not been able to find out who took the picture.

Finally, I can't resist posting this picture of the possible interaction between NGC 4631 and the quite nearby NGC 4656. Unfortunately, I have not been able to find out who took the picture.

This image is by Mark Hanson but for some reason his website is unavailable.
Top

I love that new tidal streams keep being discovered around familiar galaxy. In fact this isn't the first image to show these tidal streams. Images by other amateur astrophotographers can be seen below:
Karel Teuwen
Fabian Neyer
Top

Thanks for identifying Mark Hanson as the photographer who imaged NGC 4631/4627 and NGC 4656, starsurfer!

When I'm looking at NGC 4631 and NGC 4656 together, I'm always struck by both the similarity and the difference between these two galaxies. They are both edge-on spiral galaxies, and they appear to be about the same size. Both are somewhat disturbed.

But their stellar populations are incredibly different. NGC 4631 has a large, bright yellow bulge. NGC 4656 has extremely few old yellow stars at all. NGC 4631 is brimming with star formation and bright pink emission nebulas. The emission nebulas of NGC 4656 are so faint that most photographs don't show them at all. To me, it looks almost like NGC 4656 might be a "single-generation" galaxy: Almost all the stars appear to be the same age, there are few old stars and even fewer newborn ones. The galaxy is totally dominated by blue stars which might be ~100 million years old. 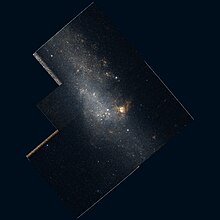 I found this Hubble image of a part of NGC 4656. I think we are looking at the galaxy's central part, and there is one object there which looks like a cluster inside a nebula and possibly one star that is bright, massive and surrounded by tatters and filaments of gas. According to Wikipedia, the brightest object just might be a huge, massive Luminous Blue Variable star, an LBV, even though the color is yellow and not blue.

The tiny picture at left doesn't show you much, but you can see many more details here.

starsurfer wrote:I love that new tidal streams keep being discovered around familiar galaxy. In fact this isn't the first image to show these tidal streams. Images by other amateur astrophotographers can be seen below:
Karel Teuwen
Fabian Neyer

Fantastic images by Karel Teuwen and Fabian Neyer, starsufer. You can really see some serious tidal tails there.