Orion in Red and Blue

Explanation: When did Orion become so flashy? This colorful rendition of part of the constellation of Orion comes from red light emitted by hydrogen and sulfur (SII), and blue-green light emitted by oxygen (OIII). Hues on the featured image were then digitally reassigned to be indicative of their elemental origins -- but also striking to the human eye. The breathtaking composite was painstakingly composed from hundreds of images which took nearly 200 hours to collect. Pictured, Barnard's Loop, across the image bottom, appears to cradle interstellar constructs including the intricate Orion Nebula seen just right of center. The Flame Nebula can also be quickly located, but it takes a careful eye to identify the slight indentation of the dark Horsehead Nebula. As to Orion's flashiness -- a leading explanation for the origin of Barnard's Loop is a supernova blast that occurred about two million years ago.

Orion Nebula in OIII, Hα, SII. Photo: Robert Fields.
There is certainly a lot of red light in today's APOD, much of it from rather low-level ionization SII. By contrast, there is not much blue-green color at all, and it is only found in the Orion Nebula.

But today's APOD doesn't look much like a mapped color image in the first place. Compare the appearance of the Running Man nebula in David Lindemann's APOD with the appearance of it in Robert Field's mapped color image. In Robert Field's image, the Running man nebula (at 9 o'clock) looks yellow from hydrogen (green) and sulfur (red), but in today's APOD it looks blue and pink, as it would in a visual light image. The blue color of the Running Man nebula certainly has nothing to do with OIII emission, but is caused by dust grains reflecting the light of a partly embedded spectral type B2 star. Such stars are not hot enough to produce OIII emission.

Robert Field's image gives you a good idea of where to expect OIII emission in and around the Orion Nebula. Orion's Belt is surrounded by a lot of blue light in today's APOD. I think it is true that there may be reflection nebulosity here, but I doubt there is OIII in that vicinity. And the enlarged image of today's APOD shows a lot of blue light surrounding Rigel. Rigel is a rather cool B-type star, and it isn't able to ionize anything whatsoever. But it is indeed surrounded by a reflection nebula.

Finally, is Barnard's Loop a supernova remnant? The abstract that the APOD link leads to reads in part like this:


We have supplemented existing spectra of Barnard's Loop with high accuracy spectrophotometry of one new position. Cloudy photoionization models were calculated for a variety of ionization parameters and stellar temperatures and compared with the observations. After testing the procedure with recent observations of M43, we establish that Barnard's Loop is photoionized by four candidate ionizing stars, but agreement between the models and observations is only possible if Barnard's Loop is enhanced in heavy elements by about a factor of 1.4. Barnard's Loop is very similar in properties to the brightest components of the Orion-Eridanus Bubble and the warm ionized medium (WIM).

I take this to mean that there are four stars in Orion that ionize Barnard's Loop. (These stars might possibly be Alnitak and Iota Orionis, and also possibly Sigma Orionis and... Alnilam? Mintaka? Isn't Theta Orionis Ic too young to have had such a large-scale effect on its surroundings already?)

But Barnard's Loop is enhanced in heavy elements in a way that makes it similar to the Orion-Eridanus Bubble.


Wikipedia wrote:
The Orion–Eridanus Superbubble, or Eridanus Soft X-ray Enhancement is a superbubble located west of the Orion Nebula. The region is formed from overlapping supernova remnants that may be associated with the Orion OB1 stellar association; the bubble is approximately 1200 ly across.[1] It is the nearest superbubble to the Local Bubble containing the Sun, with the respective shock fronts being about 500 ly apart.

Hi,
very impressive!
....but: what happened to Orion's belt? It seems to have lost it's straight line! An overlay of the stars in RGB would have been the best.
Martin
Top

MartinK wrote:Hi,
very impressive!
....but: what happened to Orion's belt? It seems to have lost it's straight line! An overlay of the stars in RGB would have been the best.
Martin

When the nebulosity of Orion is brought out rather aggressively, it happens quite often that Alnitak, the easternmost star of Orion's Belt (the one closest to the Horsehead Nebula) is sort of lost in the brilliance from all the nebulosity. (In reality, of course, Alnitak is brighter by many, many magnitudes than the nebulosity in its vicinity.)

In today's APOD, Alnitak is indeed sort of "lost". You can still see it, right above the Flame Nebula, but it looks faint. Orion's Belt. Photo: Martin Mutti.
Check out the image at left. You can see Alnitak above the Horsehead Nebula and immediately to the right of the Flame Nebula.

Above Alnitak are two small reflection nebulas. They are the ones that have been brought out quite aggressively in today's APOD, so much so that Alnitak itself is almost lost in all the nebulosity.

Awesome image... did not know a supernova remnant could last that long. Interesting that we APPEAR to be looking THROUGH it at the more distant Great Nebula...as it would have to be closer to be so "large".... but as my Science Teacher used to say.... probably ALL science teachers.... "Sure Enough...." it is...
We use to time and count how many times in class he said it.... about every 2-3 minutes, around 30-50 some times... No Kidding...

In my amateur opinion, the reason why we see no loop on the other side of Orion is that there is extremely little gas and dust there. There is, on the other hand, quite a lot of gas and dust on the side where Barnard's Loop is. Please note M78, the reflection nebula at 8 o'clock in the APOD, where a star has just been born. 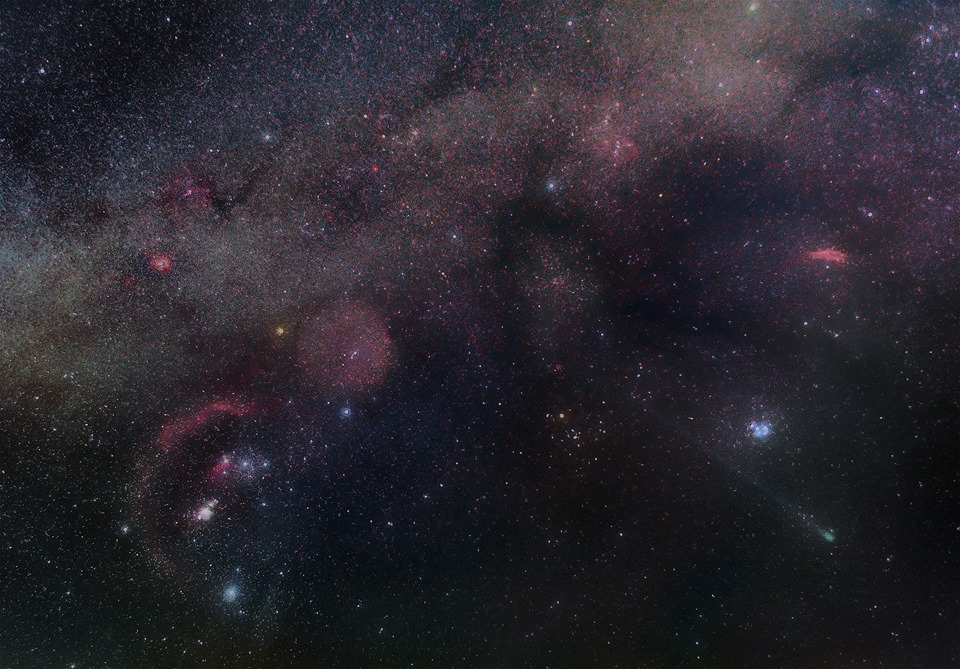 Orion and Comet Lovejoy.
Photo: Fritz Helmut Hemmerich.
Take a look at this widefield image of Orion and neighbouring constellations. There is quite a lot of star formation (and therefore gas and dust) to the north and east (above and to the left) of Orion, but there is hardly anything "on the Rigel side" of Orion.

On the other side of Orion the gas and dust that was blown away by the massive stars met no resistance, since the area was so empty. The gas therefore just scattered. A few dust structures were formed, like the Witch Head Nebula, but the resistance the gas there it met was not enough to make it glow red.

In whichever incarnation it is imaged, we never seem to tire of viewing this magnificent celestial structure!
They're all wasted!
Top

If you lived on a planet inside the Orion constellation, would the night sky appear red, or are the flashy colors only present because of the long distance?

If you lived on a planet inside the Orion constellation, would the night sky appear red, or are the flashy colors only present because of the long distance?

You would see no color. Nothing here is bright enough to stimulate our color vision (some people might vaguely detect a little greenish cast due to the oxygen emissions, but the nebula would still be substantially gray). The color we see in images is the result of detectors which are much more sensitive than our eyes. The distance doesn't matter for color or brightness. However, we see structure because we're far enough away to see the whole thing against a background. If we were inside the nebula, we'd not really see much of anything except a night sky that was not as dark as ours here.
Chris

It's a very colourful interpretation of the presence of the three elements. A comparison to the black & white version that is also in David Lindemann's section in Astrobin is interesting. I was amused by the title to the latter "193'000 stars and a 108 pannels mosaic for the Orion Challenge" as I only counted 192,999 (well OK I did not actually count the stars!)