Explanation: Bright noctilucent or night shining clouds are not familiar sights from northern France. But these electric-blue waves coursed through skies over the small town of Wancourt in Pas-de-Calais on July 6, just before the dawn. From the edge of space, about 80 kilometers above Earth's surface, the icy clouds still reflect sunlight even though the Sun itself is below the horizon as seen from the ground. Usually spotted at high latitudes in summer months the diaphanous apparitions are also known as polar mesospheric clouds. The seasonal clouds are understood to form as water vapor driven into the cold upper atmosphere condenses on the fine dust particles supplied by disintegrating meteors or volcanic ash. NASA's AIM mission provides projections of the noctilucent clouds as seen from space.

We ARE lucky that there is ONE planet that is close enough to us astronomers that we can examine it in gruesome detail!
Top

self made truck driver

Noctilucent clouds are pretty but they are the result of global warming and rocketry. Despite the warming trend of 0.5 to 1.0 degree C the global atmospheric temperature at sea level remains somewhat the same due to the auto control mechanisms found in the atmosphere. The extra moisture thrown into the atmosphere through global warming acts as a screen to block sunlight from reaching the ground. Volcanic eruptions exhibit this mechanism as well. On rare occasions, meteors and asteroids and celestial blocks of ice colliding with the atmosphere also produce noctilucent cloud formation.
Top

I don't think anybody knows for sure they are caused by global warming. It has merely been suggested as a possibility.
Just call me "geck" because "zilla" is like a last name.
Top

geckzilla wrote:
I don't think anybody knows for sure they are caused by global warming. It has merely been suggested as a possibility.

It seems like a damn good bet that summertime noctilucent clouds are mostly caused by a cooler menopause mesopause due to an increase in CO2 levels: 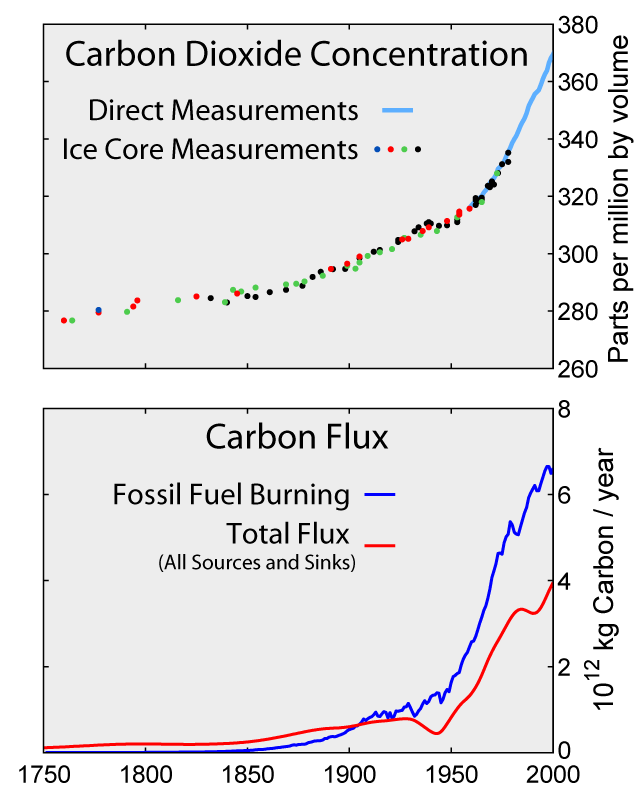 [b][color=#0000FF]Top: Increasing atmospheric carbon dioxide levels as measured in the atmosphere and reflected in ice cores. Bottom: The amount of net carbon increase in the atmosphere, compared to carbon emissions from burning fossil fuel. Noctilucent clouds are first known to have been observed in 1885[/color][/b]

<<The mesopause (not to be confused with menopause) is the temperature minimum at the boundary between the mesosphere and the thermosphere atmospheric regions. Due to the lack of solar heating and very strong radiative cooling from carbon dioxide, the mesosphere is the coldest region on Earth with temperatures as low as -100 °C. The altitude of the mesopause for many years was assumed to be at around 85 km, but observations to higher altitudes and modeling studies in the last 10 years have shown that in fact the mesopause consists of two minima - one at about 85 km and a stronger minimum at about 100 km.

In recent years the mesopause has also been the focus of studies on global climate change associated with increases in CO2. Unlike the troposphere, where greenhouse gases result in the atmosphere heating up, increased CO2 in the mesosphere acts to cool the atmosphere due to increased radiative emission. This results in a measurable effect - the mesopause should become cooler with increased CO2. Observations do show a decrease of temperature of the mesopause, though the magnitude of this decrease varies and is subject to further study. Modeling studies of this phenomenon have also been carried out.>>

https://en.wikipedia.org/wiki/Noctilucent_cloud wrote:
<<Noctilucent clouds are first known to have been observed in 1885, two years after the 1883 eruption of Krakatoa. [Water vapor is typically the most abundant volcanic gas, followed by carbon dioxide and sulfur dioxide.] It remains unclear whether their appearance had anything to do with the volcano eruption, or whether their discovery was due to more people observing the spectacular sunsets caused by the volcanic debris in the atmosphere. Studies have shown that noctilucent clouds are not caused solely by volcanic activity, although dust and water vapour could be injected into the upper atmosphere by eruptions and contribute to their formation. Scientists at the time assumed the clouds were another manifestation of volcanic ash, but after the ash had settled out of the atmosphere, the noctilucent clouds persisted. Finally, the theory that the clouds were composed of volcanic dust was disproved by Malzev in 1926. In the years following their discovery, the clouds were studied extensively by Otto Jesse of Germany, who was the first to photograph them, in 1887, and seems to have been the one to coin the term "noctilucent cloud". His notes provide evidence that noctilucent clouds first appeared in 1885. He had been doing detailed observations of the unusual sunsets caused by the Krakatoa eruption the previous year and firmly believed that, if the clouds had been visible then, he would undoubtedly have noticed them. Systematic photographic observations of the clouds were organized in 1887 by Jesse, Foerster, and Stolze and, after that year, continuous observations were carried out at the Berlin Observatory. During this research, the height of the clouds was first determined, via triangulation.

In the decades after Otto Jesse's death in 1901, there were few new insights into the nature of noctilucent clouds. Wegener's conjecture, that they were composed of water ice, was later shown to be correct. Study was limited to ground-based observations and scientists had very little knowledge of the mesosphere until the 1960s, when direct rocket measurements began. These showed for the first time that the occurrence of the clouds coincided with very low temperatures in the mesosphere.

Noctilucent clouds were first detected from space by an instrument on the OGO-6 satellite in 1972. The OGO-6 observations of a bright scattering layer over the polar caps were identified as poleward extensions of these clouds. A later satellite, the Solar Mesosphere Explorer, mapped the distribution of the clouds between 1981 and 1986 with its ultraviolet spectrometer. The clouds were detected with a lidar in 1995 at Utah State University, even when they were not visible to the naked eye. The first physical confirmation that water ice is indeed the primary component of noctilucent clouds came from the HALOE instrument on the Upper Atmosphere Research Satellite in 2001.

In 2001, the Swedish Odin satellite performed spectral analyses on the clouds, and produced daily global maps that revealed large patterns in their distribution.

On April 25, 2007, the AIM satellite (Aeronomy of Ice in the Mesosphere) was launched. It is the first satellite dedicated to studying noctilucent clouds, and made its first observations on May 25, 2007. Images taken by the satellite show shapes in the clouds that are similar to shapes in tropospheric clouds, hinting at similarities in their dynamics.

On August 28, 2006, scientists with the Mars Express mission announced that they found clouds of carbon dioxide crystals over Mars that extended up to 100 km (62 mi) above the surface of the planet. They are the highest clouds discovered over the surface of a planet. Like noctilucent clouds on Earth, they can be observed only when the Sun is below the horizon.

Research published in the journal Geophysical Research Letters in June 2009 suggests that noctilucent clouds observed following the Tunguska Event are evidence that the impact was caused by a comet.>>

Nice view of the Pleiades rising, too. A reminder in July that winter is just below the horizon.
Chris

I think I see a Charizard head, and even a Pikachu next to it.... but then I WAS watch Pokemon a bit ago....

Would there be that much "meteoric material" at any given moment? That would presume a vast amount in the atmosphere continuously... while "global warming" and Noctilucent Clouds, seem to have an association, going back to when they were first observed... there has ALWAYS been "meteoric material"... but Noctilucent Clouds only start being noticed in 1885?
If due to "Meteoric Material" surely it would have been observed long before...

Boomer12k wrote:Would there be that much "meteoric material" at any given moment?

The most recent models estimate that the Earth accumulates over 50 tons of mass each day from meteoritic bodies, nearly all of which is deposited as dust in the upper atmosphere.


That would presume a vast amount in the atmosphere continuously... while "global warming" and Noctilucent Clouds, seem to have an association, going back to when they were first observed... there has ALWAYS been "meteoric material"... but Noctilucent Clouds only start being noticed in 1885?
If due to "Meteoric Material" surely it would have been observed long before...

The clouds require particles to seed their droplets on, and meteoritic material constitutes the vast majority of those particles. That does not suggest that all you need is high altitude particles. Other conditions have to be right, as well. Once consequence of global warming is colder temperatures in the upper atmosphere, which is conducive to cloud formation.
Chris

In fact, I think the Pleiades are just peeking above the horizon in the northeast at about 1 a.m. here in Malmö, Sweden in early July.

At the far right of the main page crop, and over on the right side of the full panorama.
pleiades.jpg
You do not have the required permissions to view the files attached to this post.
Chris

At the far right of the main page crop, and over on the right side of the full panorama.
pleiades.jpg