NGC 3576: The Statue of Liberty Nebula

Explanation: What's happening in the Statue of Liberty nebula? Bright stars and interesting molecules are forming and being liberated. The complex nebula resides in the star forming region called RCW 57. This image showcases dense knots of dark interstellar dust, bright stars that have formed in the past few million years, fields of glowing hydrogen gas ionized by these stars, and great loops of gas expelled by dying stars. A detailed study of NGC 3576, also known as NGC 3582 and NGC 3584, uncovered at least 33 massive stars in the end stages of formation, and the clear presence of the complex carbon molecules known as polycyclic aromatic hydrocarbons (PAHs). PAHs are thought to be created in the cooling gas of star forming regions, and their development in the Sun's formation nebula five billion years ago may have been an important step in the development of life on Earth. The featured image was taken at the Cerro Tololo Inter-American Observatory in Chile.


APOD Robot wrote:
This image showcases dense knots of dark interstellar dust, bright stars that have formed in the past few million years, fields of glowing hydrogen gas ionized by these stars, and great loops of gas expelled by dying stars.

Bright stars that have formed in the past million years... it is quite hard to spot which stars in this picture are likely products of the NGC 3576 star factory and which are simply foreground (or, in some cases, background) objects.

What is known about any dying stars in the NGC 3576 nebula? Westerlund 1 and Westerlund 2 are two massive young clusters in the Milky Way, but they differ in age, stellar evolution and nebular surroundings.

Westerlund 1 (also called Ara Cluster,[4] designated Wd1) is a compact young super star cluster in the Milky Way galaxy, about 3.5–5 kpc away from Earth. It is one of the most massive young star clusters in the Milky Way,...
The cluster contains a large number of rare, evolved, high-mass stars, including: 6 yellow hypergiants, 4 red supergiants including Westerlund 1-26, one of the largest known stars, 24 Wolf-Rayet stars, a luminous blue variable, many OB supergiants, and an unusual supergiant sgB[e] star which has been proposed to be the remnant of a recent stellar merger.

The cluster contains at least a dozen early O stars, of which at least three are eclipsing binaries. All are hotter than 38,000K and more luminous than 230,000 L☉.[3] There are around 20 further O class stars in the cluster, all main sequence objects implying a very young age for the cluster.
Several Wolf–Rayet stars are found in the vicinity of Westerlund 2, although not in the central core...

Westerlund 2 also contains a large number of pre-main sequence stars with masses below 2.5 M☉. These stars constrain the age of the cluster to near 2 Myr.

"Evolved stars" means stars that have begun the process of dying. Note that the highly evolved cluster Westerlund 2, which contains many "dying stars", seems to lack a nebula in its vicinity, whereas the young cluster Westerlund 2, which contains many pre-main sequence stars, "baby stars and fetus stars", displays a very substantial nebula to its southeast.

I find it confusing to be told about "dying stars" in relation to the very substantial nebula of NGC 3576. I admit that we could be talking about outbursts from Wolf-Rayet stars in NGC 3576, which may conceivably have caused the loops of this distinctively shaped nebula.

Looks to me that Lady Liberty is giving the one-fingered salute to the rest of the Galaxy...
They're all wasted!
Top

THAT, Sir, is a map of the British Isles!

Including the Channel and the coast of the Netherlands! But unfortunately omitting the island of Ireland and most of Scotland.
But anyway.
Relinquish your colonial and propriatorial presumption at once, or accept the direst conseqences!
John
Top

THAT, Sir, is a map of the British Isles!

Including the Channel and the coast of the Netherlands! But unfortunately omitting the island of Ireland and most of Scotland.
But anyway.
Relinquish your colonial and propriatorial presumption at once, or accept the direst conseqences!
John

Hey, John, isn't Ireland on the wrong side?

I have to return to the question of nebulas containing both dying and not-yet-born stars. 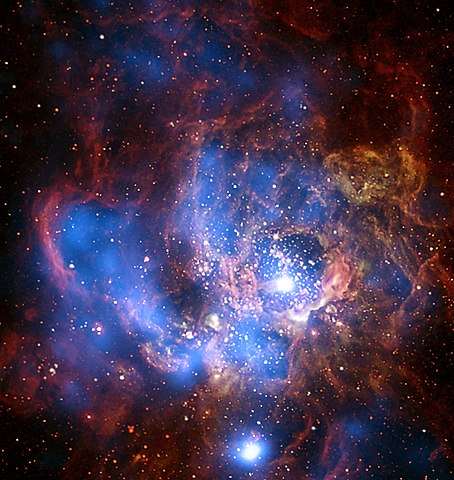 NGC 604. Credit:
X-ray: NASA/CXC/CfA/R. Tuellmann et al.;
Optical: NASA/AURA/STScI
A new study unveils NGC 604, the largest region of star formation in the nearby galaxy M33, in its first deep, high-resolution view in X-rays. This composite image from Chandra X-ray Observatory data (colored blue), combined with optical light data from the Hubble Space Telescope (red and green), shows a divided neighborhood where some 200 hot, young, massive stars reside.
...
However, there is a difference between the two sides of this bifurcated stellar city... On the western (right) side, the amount of hot gas found in the bubbles corresponds to about 4300 times the mass of the sun. This value and the brightness of the gas in X-rays imply that the western part of NGC 604 is entirely powered by winds from the 200 hot massive stars.
...
The situation is different on the eastern (left) side of NGC 604. On this side, the X-ray gas contains 1750 times the mass of the sun and winds from young stars cannot explain the brightness of the X-ray emission. The bubbles on this side appear to be much older and were likely created and powered by young stars and supernovas in the past.

But there is little to suggest that NGC 3576 has much in common with giant star factory NGC 604 in the Triangulum galaxy.