Once Upon a Solstice Eve

Explanation: Once upon a solstice eve a little prince gazed across a frozen little planet at the edge of a large galaxy. The little planet was planet Earth of course, seen in this horizon to horizon, nadir to zenith projection, a digitally stitched mosaic from the shores of the Sec reservoir in the Czech Republic. So the large galaxy must be the Milky Way, and the brightest beacon on the planet's horizon Venus, visible around the globe as this season's brilliant evening star. Celestial treasures in surrounding dark skies include the Pleiades star cluster, and the North America nebula found along a dusty galactic rift. Embracing Venus, Zodiacal light traces a faint band across the night, but the more colorful pillars of light shine above streets a little closer to home.

Our tiny Earth! Yet in truth, Earth is so very much much tinier than even this!
Top

<<Seč dam is the largest dam in the protected landscape area Železné hory. The lake (approx. 7 kilometers long and is situated at 490 meters above the sea level) offers great variety of activities including swimming, sailing, boating, windsurfing, scuba diving, fishing in summer and ice skating in winter (at own risk).

The dam was constructed between 1925 and 1934 as a protection against floods. As a result of the construction, 22 buildings were depopulated and flooded. Remains of some of them [buildings, people?] are popular destination for scuba divers.

The environmentally most valuable part of Seč are Ostrůvek and the Oheb peninsula, which consists of a steep rock that ends with a small rocky promontory covered with pines. This place is a home to some rare invertebrate species (snails, beetles) as well as a natural habitat of Eurasian eagle-owls.>> 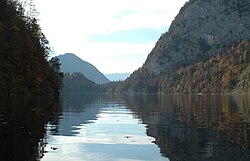 <<Lake Toplitz (German: Toplitzsee) is a lake situated in a dense mountain forest high up in the Austrian Alps, 98 km from Salzburg in western Austria. The area is only accessible on foot, via a private mile-long track that serves the Fischerhütte (Fisherman's Hut) restaurant at the western end. The lake is surrounded by cliffs and forests in the Salzkammergut lake district, within the Totes Gebirge (dead mountains). The Toplitzsee water contains no oxygen below a depth of 20 m. Fish can survive only in the top 18 m, as the water below 20 m is salty, although bacteria and worms that can live without oxygen have been found below 20 m.

Over £100 million of counterfeit pound sterling notes were dumped in the lake after Operation Bernhard, which was never fully put into action. There is speculation that there might be other valuables to be recovered from the bottom of the Toplitzsee. (Lake Toplitz is mentioned the James Bond movie Goldfinger, where Bond receives the gold bar used to tempt Auric Goldfinger; the bar is said to have been part of a Nazi hoard that was recovered from the lake.) There is a layer of sunken logs floating half way to the bottom of the lake, making diving beyond it hazardous or impossible.>>

Clicking the 'galactic rift' link in the explanation brings up the APOD of 2010 June 25 https://apod.nasa.gov/apod/ap100625.html in the explanation of which there is a link relating to the 'Great Rift'. In the information brought up through that link it mentions of the dark areas in the Milky Way '...this Great Rift or Dark Rift, as it’s called...consists of dark, obscuring dusk in the disk of our Milky Way galaxy'. I assume that the 'galactic rift' is the same as the Great Rift/Dark Rift but could someone please verify if that is right or not. Thanks.
Top
4 posts • Page 1 of 1