This artist's rending illustrates a conceptual design for a potential future mission to land a robotic probe on the surface of Jupiter's moon Europa. Credit: NASA/JPL-Caltech

A report on the potential science value of a lander on the surface of Jupiter's icy moon Europa has been delivered to NASA, and the agency is now engaging the broader science community to open a discussion about its findings.

In early 2016, in response to a congressional directive, NASA's Planetary Science Division began a pre-Phase A study to assess the science value and engineering design of a future Europa lander mission. NASA routinely conducts such studies -- known as Science Definition Team (SDT) reports -- long before the beginning of any mission to gain an understanding of the challenges, feasibility and science value of the potential mission. In June 2016, NASA convened a 21-member team of scientists for the SDT. Since then, the team has deliberated to define a workable and worthy set of science objectives and measurements for the mission concept, submitting a report to NASA on Feb. 7.

The report lists three science goals for the mission. The primary goal is to search for evidence of life on Europa. The other goals are to assess the habitability of Europa by directly analyzing material from the surface, and to characterize the surface and subsurface to support future robotic exploration of Europa and its ocean. The report also describes some of the notional instruments that could be expected to perform measurements in support of these goals. ...

[img3="This artist's rendering shows NASA's Europa mission spacecraft, which is being developed for a launch sometime in the 2020s. Image credit: NASA/JPL-Caltech"]http://www.jpl.nasa.gov/spaceimages/ima ... _hires.jpg[/img3][hr][/hr]
A mission to examine the habitability of Jupiter's ocean-bearing moon Europa is taking one step closer to the launchpad, with the recent completion of a major NASA review.

A highlight of Phase A was the selection and accommodation of 10 instruments being developed to study the scientific mysteries of Europa. The new mission phase is planned to continue through September 2018, and will result in the completion of a preliminary design for the mission's systems and subsystems. Some testing of spacecraft components, including solar cells and science instrument detectors, has already been underway during Phase A, and this work is planned to continue into Phase B.

In addition, during Phase B subsystem vendors will be selected, as well as prototype hardware elements for the science instruments. Spacecraft subassemblies will be built and tested as well.

The Europa mission spacecraft is being planned for launch in the 2020s, arriving in the Jupiter system after a journey of several years. The spacecraft would orbit Jupiter as frequently as every two weeks, providing many opportunities for close flybys of Europa. The mission plan includes 40 to 45 flybys in the prime mission, during which the spacecraft would image the moon's icy surface at high resolution and investigate its composition and the structure of its interior and icy shell. ...

The moniker harkens back to the clipper ships that sailed across the oceans of Earth in the 19th century. Clipper ships were streamlined, three-masted sailing vessels renowned for their grace and swiftness. These ships rapidly shuttled tea and other goods back and forth across the Atlantic Ocean and around the globe.

In the grand tradition of these classic ships, the Europa Clipper spacecraft would sail past Europa at a rapid cadence, as frequently as every two weeks, providing many opportunities to investigate the moon up close. The prime mission plan includes 40 to 45 flybys, during which the spacecraft would image the moon's icy surface at high resolution and investigate its composition and the structure of its interior and icy shell.

Europa has long been a high priority for exploration because it holds a salty liquid water ocean beneath its icy crust. The ultimate aim of Europa Clipper is to determine if Europa is habitable, possessing all three of the ingredients necessary for life: liquid water, chemical ingredients, and energy sources sufficient to enable biology. ... 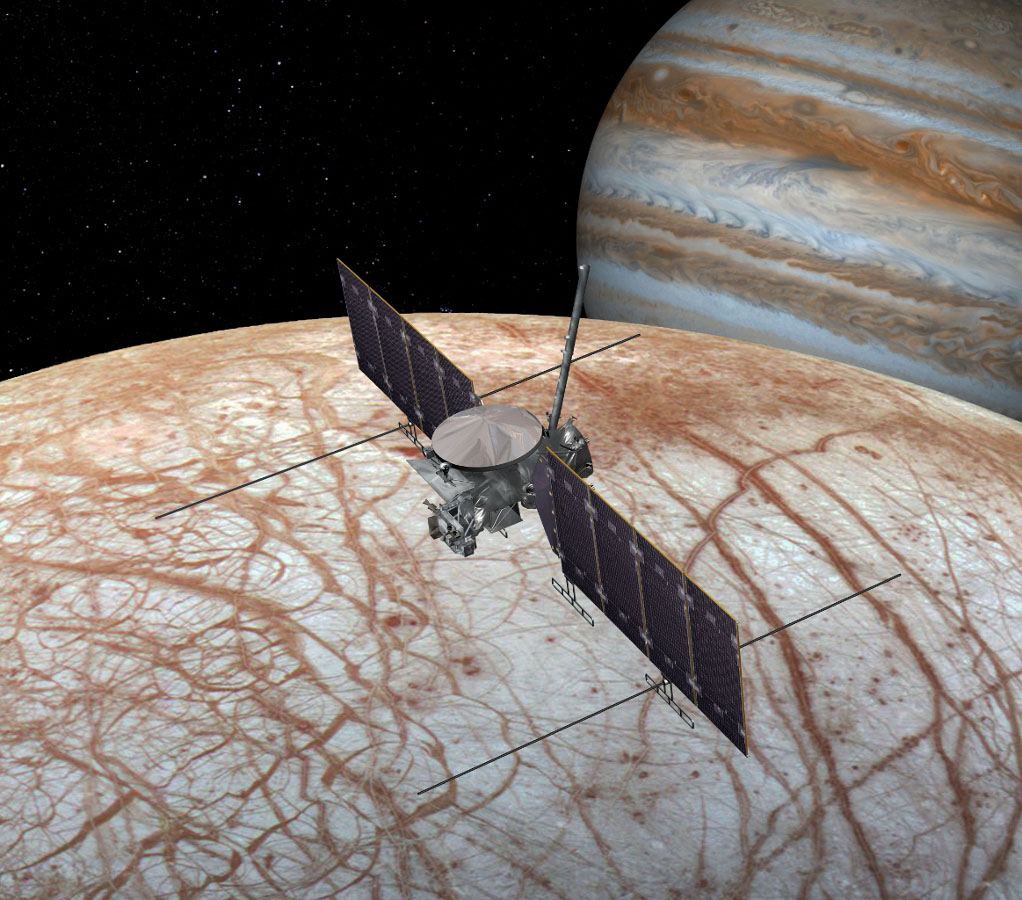 A 2016 artist's concept of the Europa Clipper spacecraft. The design is changing as the spacecraft is developed. Credit: NASA/JPL-Caltech

An icy ocean world in our solar system that could tell us more about the potential for life on other worlds is coming into focus with confirmation of the Europa Clipper mission’s next phase. The decision allows the mission to progress to completion of final design, followed by the construction and testing of the entire spacecraft and science payload.

“We are all excited about the decision that moves the Europa Clipper mission one key step closer to unlocking the mysteries of this ocean world,” said Thomas Zurbuchen, associate administrator for the Science Mission Directorate at NASA Headquarters in Washington. “We are building upon the scientific insights received from the flagship Galileo and Cassini spacecraft and working to advance our understanding of our cosmic origin, and even life elsewhere.”

The mission will conduct an in-depth exploration of Jupiter's moon, Europa, and investigate whether the icy moon could harbor conditions suitable for life, honing our insights into astrobiology. To develop this mission in the most cost-effective fashion, NASA is targeting to have the Europa Clipper spacecraft complete and ready for launch as early as 2023. The agency baseline commitment, however, supports a launch readiness date by 2025.

166_148_Europa_Water_World_1600[1].jpg
NASA's Europa Clipper mission will conduct detailed reconnaissance of Jupiter's moon Europa to see whether the icy moon could harbor conditions suitable for life. The mission will carry a highly capable, radiation-tolerant spacecraft that will perform repeated close flybys of the icy moon from a long, looping orbit around Jupiter.

The payload of selected science instruments includes cameras and spectrometers to produce high-resolution images of Europa's surface and determine its composition. An ice penetrating radar will determine the thickness of the moon's icy shell and search for subsurface lakes similar to those beneath Antarctica. The mission also will carry a magnetometer to measure strength and direction of the moon's magnetic field, whichwill allow scientists to determine the depth and salinity of its ocean.

A thermal instrument will scour Europa's frozen surface in search of recent eruptions of warmer water, while additional instruments will search for evidence of water and tiny particles in the moon's thin atmosphere. NASA's Hubble Space Telescope observed water vapor above the south polar region of Europa in 2012, providing the first strong evidence of water plumes. If the plumes' existence is confirmed - and they're linked to a subsurface ocean - it will help scientists investigate the chemical makeup of Europa's potentially habitable environment while minimizing the need to drill through layers of ice.

You do not have the required permissions to view the files attached to this post.
Know the quiet place within your heart and touch the rainbow of possibility; be
alive to the gentle breeze of communication, and please stop being such a jerk. — Garrison Keillor
Top
5 posts • Page 1 of 1