The famous Thackeray’s Globules are seen here amidst an aurora-like backdrop of ionized Ha, OIII, and SII in this narrowband image in HST palette.
Top

9 x 5-minute subs with a 1-minute gap between subs taken on a Sky 90 and M26C OSC CCD at the New Forest Observatory.
Asteroid JO25 2014 moving through Canes Venatici with bright central star SAO 63514 for reference. 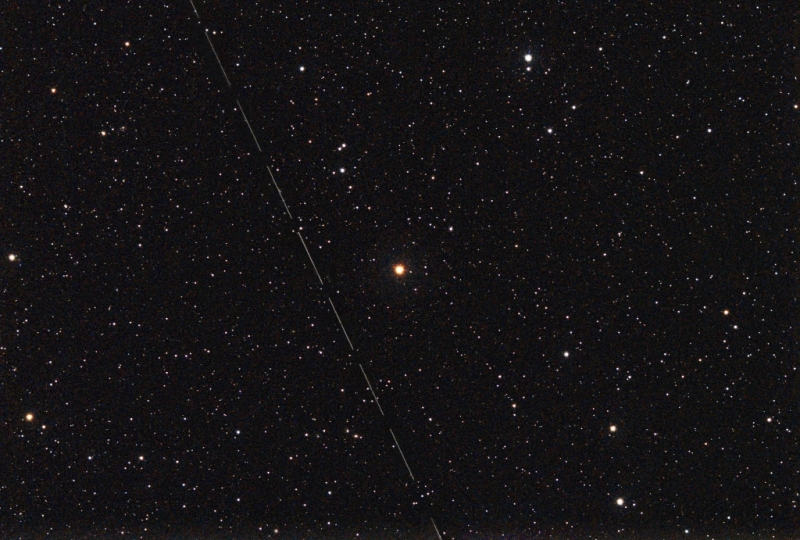 Asteroid 2014 JO25 was the big star yesterday. I recorded it, moving fast across the sky (about 1 degree per hour) with a simple 80mm refracting scope and a CCD camera on an equatorial mount. Thanks to its brightness, it was fairly easy to capture with basic amateur equipment, even from the light-polluted skies of Bloomington.
Images are 5 seconds exposure each. 254 images total taken between 2h15 and 2h45, April 20th (UTC). The relatively bright star in front of which the asteroid passes (although there was probably no real occultation from my location) is HIP 64077 in Coma Berenice, an anonymous star which could barely be seen to the naked eye under exceptionally dark skies (magnitude 6.2).

While one telescope was recording the images, I observed the asteroid visually with an 8-inch SCT. The asteroid appeared as a faint but clear visible 'moving star' in the light-polluted skies of Bloomington (Indiana). Motion was easy to see every time the asteroid passed by a nearby star. I managed to show the asteroid to 5 of my friends, big success!

The animation as a GIF:

Asteroid JO25 2014 captured at the New Forest Observatory with a Sky 90 refractor and an M26C 10-Megapixel OSC CCD.
Image annotated and shown in negative B&W to clearly show the asteroid trajectory. 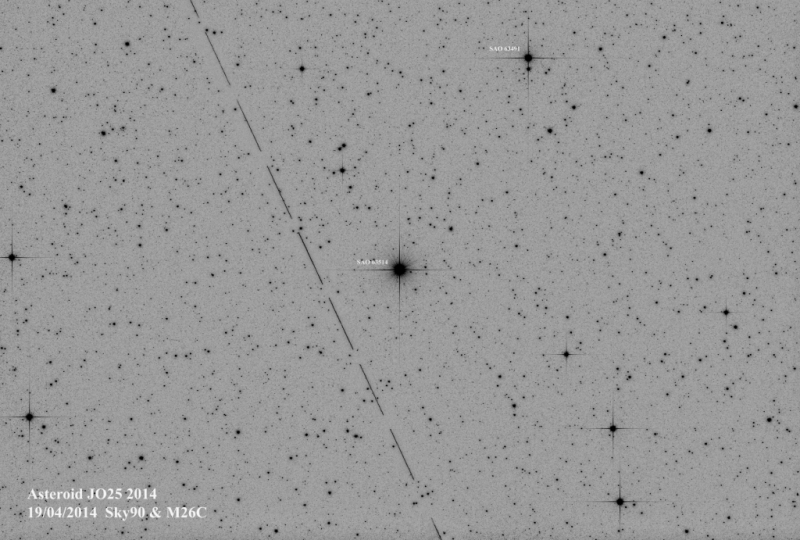 2016 Solar Analemma (and a Half) over The Outer Hebrides

In the composition (a six shot panoramic for the background and 56 different solar pictures) we can clearly see two solar analemmas pictured respectively in the early and middle morning. The immediate thought goes to the morning figure (the one on the left) which is complete only for the upper summer half, as a proof of the long dark nights here in the upper latitudes.

An experiment that I wanted to try, and that I can surely say has been a success, even if the doubling of everything to capture the two figures is a workload to consider. And the weather surely made all this year long adventure like a lottery win in the end!

This strange figure, with a shape of an 8 or an infinite, the analemma, is caused by the axial tilt of our planet, and by the elliptical shape of our orbit around the Sun. If we take a picture day by day, always at the same hour, the Sun is not in a fixed position, but it slowly climbs up and then down the curve. 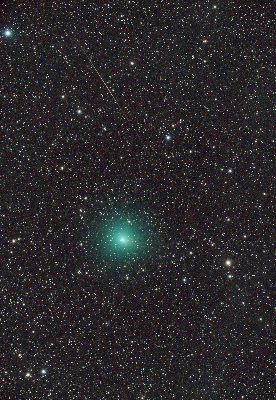 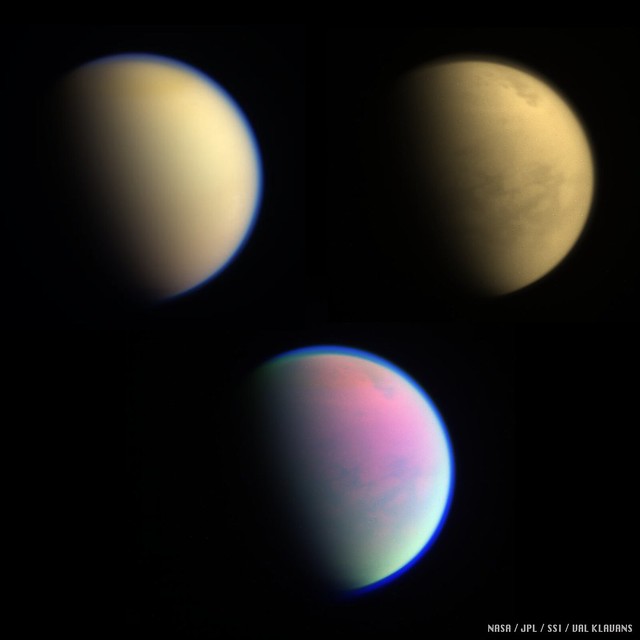 Three Views of Titan by Val Klavans, on Flickr

All images taken by the Cassini spacecraft on April 18, 2017 & processed by Val Klavans
Top

Aurora Australis from 38 degrees south
IMG_0493.JPG
Taken from Noojee, Victoria, Australia on 22 April 2017
You do not have the required permissions to view the files attached to this post.
Top 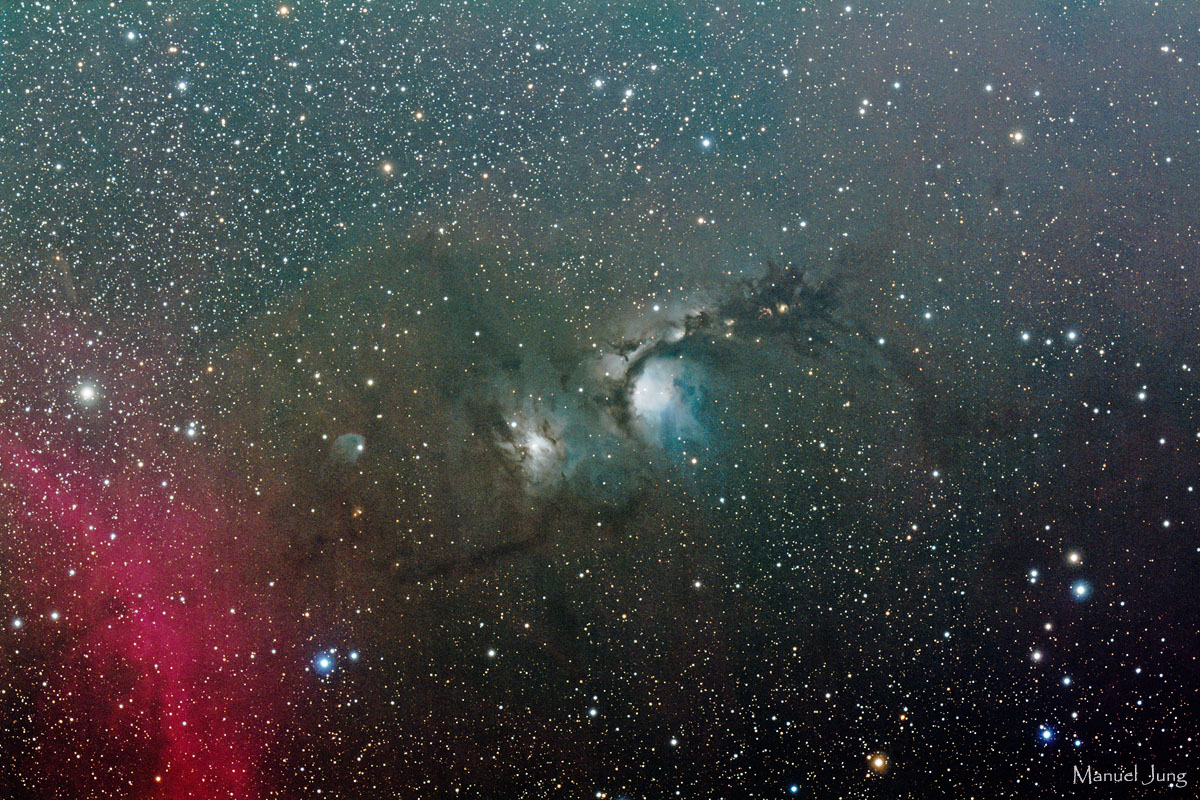 It is a composite image done by means of two different techniques: Infrared shooting + and star trail. The shots comes from the same camera, in the same location, at the same focal length and same position but at two different times of the day: mid-day and night.

As many infrared images, the final effect is to have a white color in the greens with the sky, and the rest, shading towards blues. This is the perfect color grading to add a star trail.
The final effect is an oneiric image picturing the dawn of Orion constellation behind the mountains in the background from an old farmhouse courtyard. 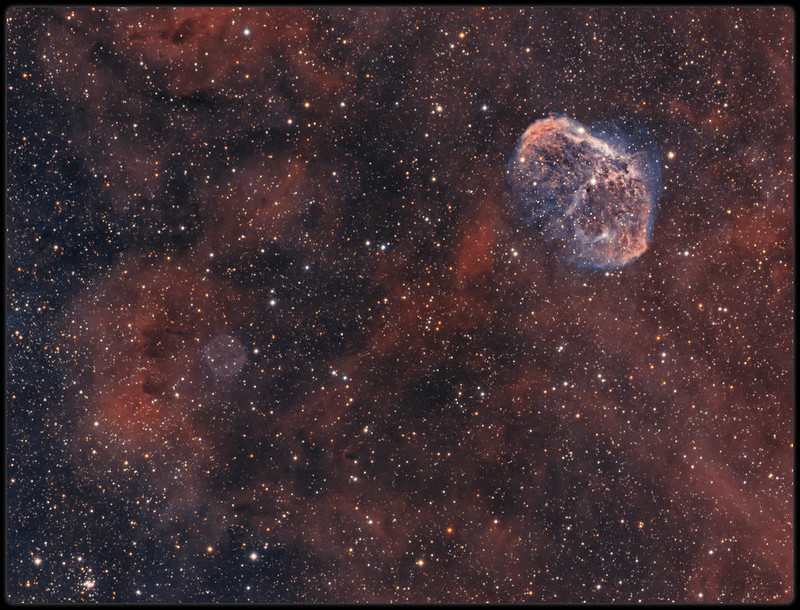 A soap bubble and its neighbour... by Andre van der Hoeven, on Flickr

The "Soap Bubble Nebula" is the common name for the planetary nebula PN G75.5+1.7. This nebula was only discovered by amateur astronomer Dave Jurasevich on July 6th, 2008. It was independently confirmed and reported by Keith Quattrocchi and Mel Helm on July 17th, 2008.

PN G75.5+1.7 is situated in the constellation of Cygnus, very near the Crescent Nebula (NGC 6888). It is embedded in a large diffuse nebula which, in combination with its low surface magnitude, is the reason it was not discovered until recently.

NGC 6888, also known as the Crescent Nebula, is a cosmic bubble about 25 light-years across, blown by winds from its central, bright, massive star. This image uses narrow band image data that isolates light from hydrogen and oxygen atoms in the wind-blown nebula. The oxygen atoms produce the blue-green hue that seems to enshroud the detailed folds and filaments. Visible within the nebula, NGC 6888's central star is classified as a Wolf-Rayet star (WR 136). The star is shedding its outer envelope in a strong stellar wind, ejecting the equivalent of the Sun's mass every 10,000 years. The nebula's complex structures are likely the result of this strong wind interacting with material ejected in an earlier phase. Burning fuel at a prodigious rate and near the end of its stellar life this star should ultimately go out with a bang in a spectacular supernova explosion. Found in the nebula rich constellation Cygnus, NGC 6888 is about 5,000 light-years away. (source: APOD)

I decided in 2015 that I wanted to see if I could catch this very faint nebula with my 9.2 cm refractor. I started working on imaging this in 2015, but then I only got 4 images before weather interrupted the imaging sequence. It was only in 2016 that I was able to catch more data of this region to see what would come out. In August 2016 I took for 5 days in a row images of this nebula in H-alpha, OIII and RGB. 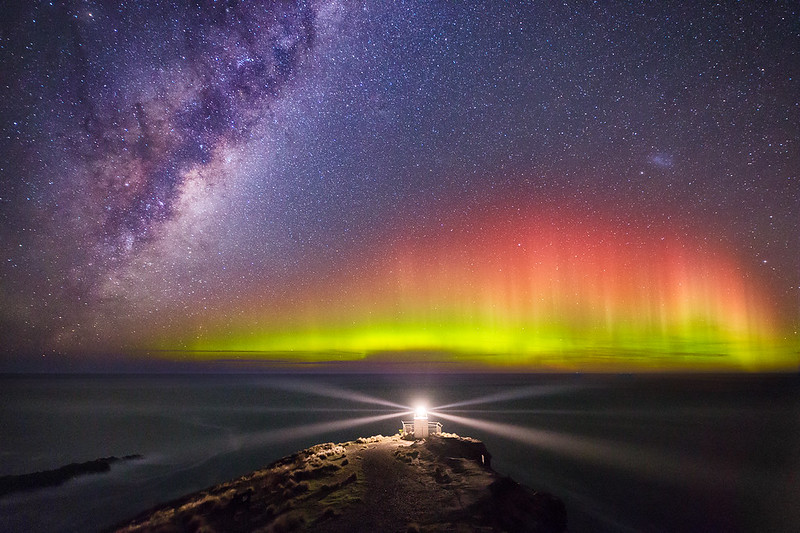 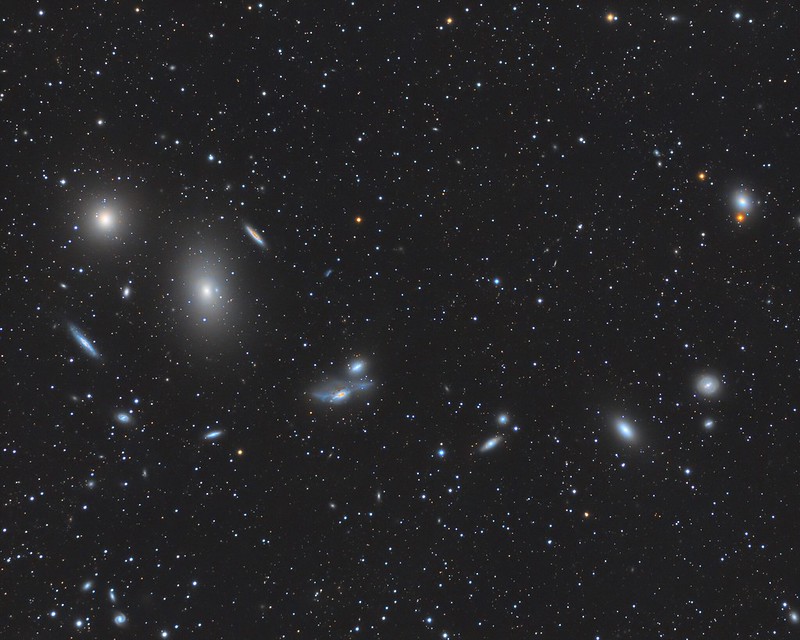 Una panorámica del cielo pampeano
https://www.facebook.com/lanocheysuencanto/
Copyright: Damián Avila
You do not have the required permissions to view the files attached to this post.
Top 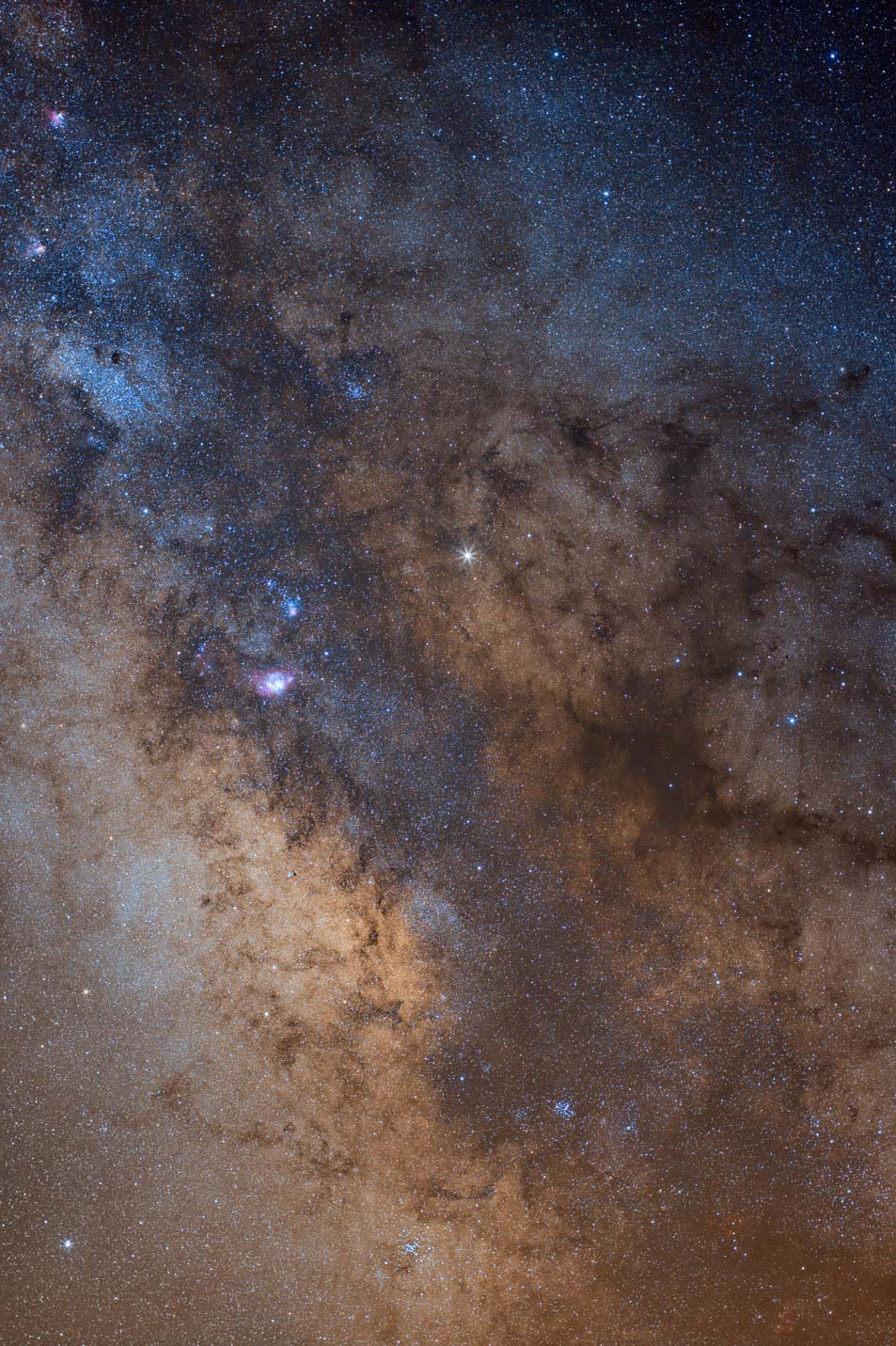 Galactic core, meteor and Venus
Copyright: Steve Johnston
Cape Conran meteor.jpg
Taken from Cape Conran, Victoria, Australia on 2 October 2013.
Single 60s exposure on tracking mount,14mm f/2.8, IO-1600.
You do not have the required permissions to view the files attached to this post.
Top 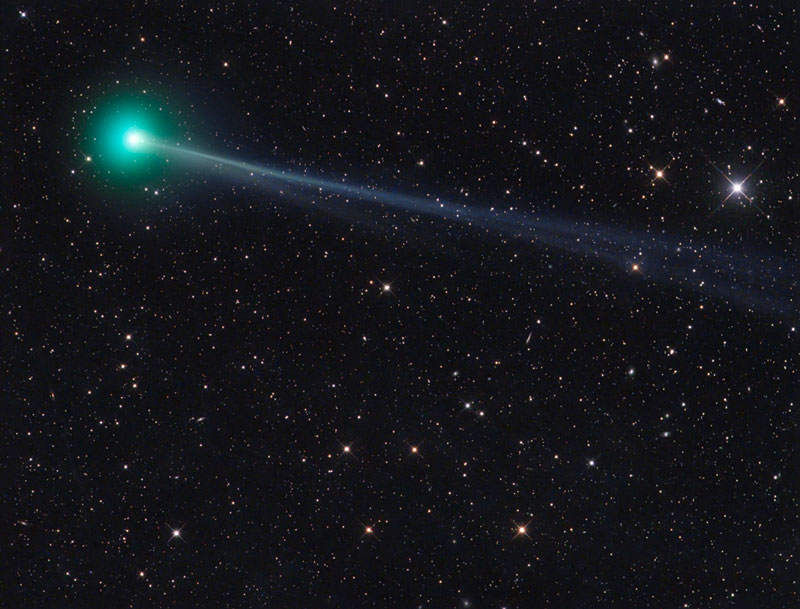