Explanation: Grand spiral galaxies often seem to get all the glory. Their young, blue star clusters and pink star forming regions along sweeping spiral arms are guaranteed to attract attention. But small irregular galaxies form stars too, like NGC 4449, about 12 million light-years distant. Less than 20,000 light-years across, the small island universe is similar in size, and often compared to our Milky Way's satellite galaxy, the Large Magellanic Cloud (LMC). This remarkable Hubble Space Telescope close-up of the well-studied galaxy was reprocessed to highlight the telltale reddish glow of hydrogen gas. The glow traces NGC 4449's widespread star forming regions, some even larger than those in the LMC, with enormous interstellar arcs and bubbles blown by short-lived, massive stars. NGC 4449 is a member of a group of galaxies found in the constellation Canes Venatici. It also holds the distinction of being the first dwarf galaxy with an identified tidal star stream.

Ah, color, color, color. I was surprised and, I must admit, very slightly horrified, when I saw this picture.

As a Color Commentator and a lover of all blue things, I'm a dedicated lover of all blue galaxies, and NGC 4449 is one of the bluest galaxies in the nearby universe. And, hmmm, it doesn't look much like that at all in today's APOD.

In Wray's atlas, the inner parts of NGC 4449 are either bluish or white (because they are overexposed), and the light comes from brilliant OB stars. The outer parts of the galaxy are greenish in Wray's image, undoubtedly from A- and F-type stars. The stellar populations that would look red in Wray's image, made up of G- and K-type stars, are simply too faint to show up in Wray's not very highly resolved images. I wish I could show you James D Wray's UBV picture of NGC 4449, taken in 1979, but I can't! 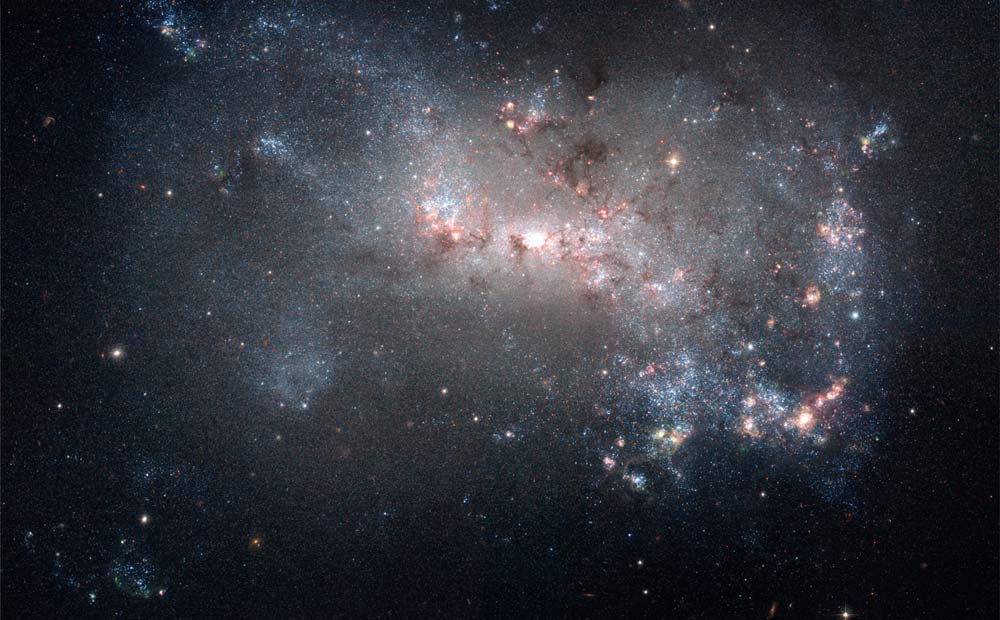 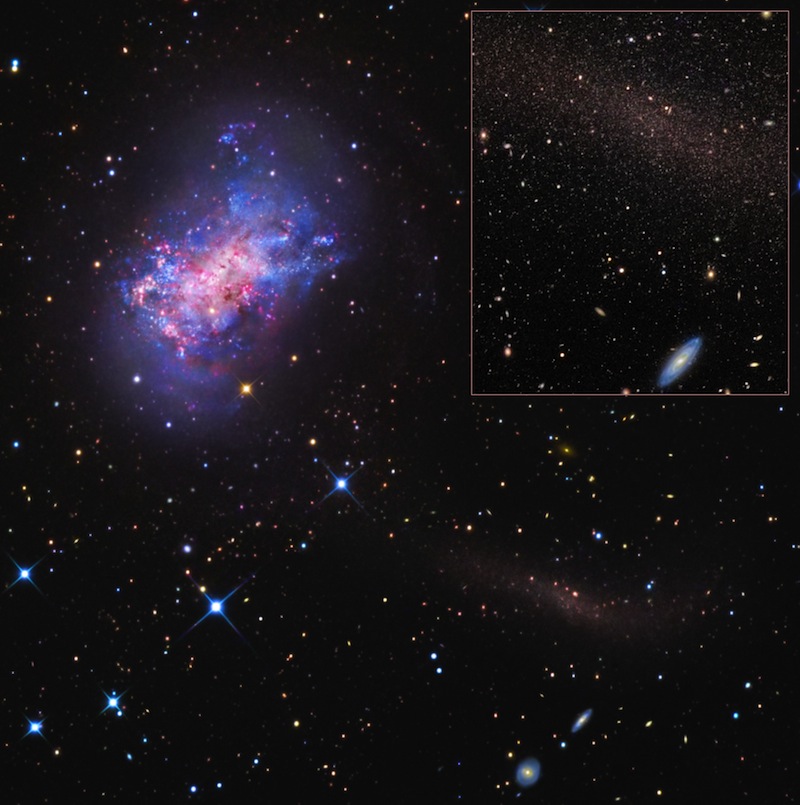 Here you can see two pictures of NGC 4449, both taken by R. Jay GaBany. I'm sorry that one of them is so tiny, but the only other versions of that particular picture are huge. Here is - caution! - a 3MB version of the image at right.

But please note how, in the picture at left, the outer parts of NGC 4449 look relatively blue. In the picture at right, and certainly in the large version of it, the outer parts of the galaxy look beige. The beige stars definitely represent a non-blue population dominated by, most likely, red giants, most of them of spectral class K. They are (pretty much) the same color as the stars of the small stellar stream merging with NGC 4449.

Today's APOD is redder in overall color balance than any other version I have seen of this galaxy, at least in a picture that looks at least moderately "true color". I apologize for my horrible attachment, which is the first one I've ever done. But you can see how red today's APOD is, compared with the other pictures of NGC 4449 that I've shown you.

Edit: An interesting aspect of today's APOD is that in that picture, NGC 4449 appears to lack a bright nucleus. But that bright nucleus is very obvious in the Hubble picture of NGC 4449 near the top of my post.
You do not have the required permissions to view the files attached to this post.
Color Commentator
Top

Beautiful and thought provoking but nevertheless, it kinda reminds me of a fat blue rhino wearing a fluffy red sweater.
Top
3 posts • Page 1 of 1