A Happy Sky over Los Angeles

Explanation: Sometimes, the sky may seem to smile over much of planet Earth. On this day in 2008, visible the world over, was an unusual superposition of our Moon and the planets Venus and Jupiter. Pictures taken at the right time show a crescent Moon that appears to be a smile when paired with the planetary conjunction of seemingly nearby Jupiter and Venus. Pictured here is the scene as it appeared from Mt. Wilson Observatory overlooking Los Angeles, California, USA after sunset on 2008 November 30. Highest in the sky and farthest in the distance is the planet Jupiter. Significantly closer and visible to Jupiter's lower left is Venus, appearing through Earth's atmospheric clouds as unusually blue. On the far right, above the horizon, is our Moon, in a waxing crescent phase. Thin clouds illuminated by the Moon appear unusually orange. Sprawling across the bottom of the image are the hills of Los Angeles, many covered by a thin haze, while LA skyscrapers are visible on the far left. Hours after the taking of this image, the Moon approached the distant duo, briefly eclipsed Venus, and then moved on. This week, another conjunction of Venus and Jupiter is occurring and is visible to much of planet Earth to the east just before sunrise.

It was indeed a beautiful conjunction.
According to a simulation I did in StarryNightPro, on this day in 2008 the Moon was close to full so I think this picture was rather photographed on the 30th of November 2008.
Top

PeterR wrote:
It was indeed a beautiful conjunction.
According to a simulation I did in StarryNightPro, on this day in 2008 the Moon was close to full so I think this picture was rather photographed on the 30th of November 2008.

Weekend APODs are often repeats from earlier years and aren't carefully screened for such anachronisms.

The text does specifically state "2008 November 30" however.
Art Neuendorffer
Top 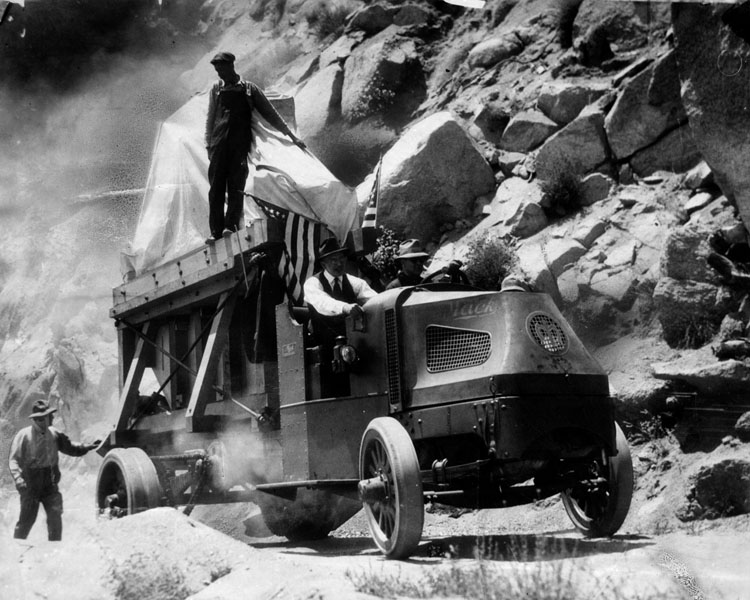 [b][color=#0000FF]The mirror of the Hooker telescope on its way up the Mount Wilson Toll Road.[/color][/b]

<<The Mount Wilson Observatory (MWO) is an astronomical observatory in Los Angeles County, California, United States. The MWO is located on Mount Wilson, a 1,740-metre peak in the San Gabriel Mountains near Pasadena, northeast of Los Angeles.

Once the sixty-inch telescope project was well underway, Hale immediately set about creating a larger telescope. John D. Hooker provided crucial funding of $45,000 for the purchase and grinding of the mirror, while Andrew Carnegie provided funds to complete the telescope and dome. The Saint-Gobain factory was again chosen to cast a blank in 1906, which it completed in 1908. After considerable trouble over the blank (and potential replacements), the Hooker telescope was completed and saw "first light" on November 2, 1917. As with the sixty-inch telescope, the bearings are assisted by the use of mercury floats to support the 100 ton weight of the telescope.

The 100-inch (2.5 m) Hooker telescope was the world's largest telescope from 1917 to 1949. It is one of the most famous telescopes in observational astronomy of the 20th century. It was used by Edwin Hubble to make observations with which he produced two fundamental results which changed the scientific view of the Universe. Using observations he made in 1922–1923, Hubble was able to prove that the Universe extends beyond the Milky Way galaxy, and that several nebula were millions of light-years away. He then showed that the universe was expanding.

In 1919 the Hooker telescope was equipped with a special attachment, a 6-meter optical astronomical interferometer developed by Albert A. Michelson, much larger than the one he had used to measure Jupiter's satellites. Michelson was able to use the equipment to determine the precise diameter of stars, such as Betelgeuse, the first time the size of a star had ever been measured. Henry Norris Russell developed his star classification system based on observations using the Hooker.>>

Thought this looked familiar. I shot the same conjunction from Colorado, but the next night, when it had become a sad sky.

conj2.jpg
conj1.jpg
You do not have the required permissions to view the files attached to this post.
Chris

PeterR wrote:
It was indeed a beautiful conjunction.
According to a simulation I did in StarryNightPro, on this day in 2008 the Moon was close to full so I think this picture was rather photographed on the 30th of November 2008.

Weekend APODs are often repeats from earlier years and aren't carefully screened for such anachronisms.

The text does specifically state "2008 November 30" however.

The picture was taken approx. 01:00UT 12/1/2008. Though not visible from LA, the eclipse occurred about 13 hours later (the eclipse link is a different event that occurred in 2015)
A pessimist is nothing more than an experienced optimist
Top
7 posts • Page 1 of 1