Goethe: How Massive Can Neutron Stars Be?

Goethe: How Massive Can Neutron Stars Be?

How Massive Can Neutron Stars Be?
Goethe University Frankfort | 2018 Jan 15 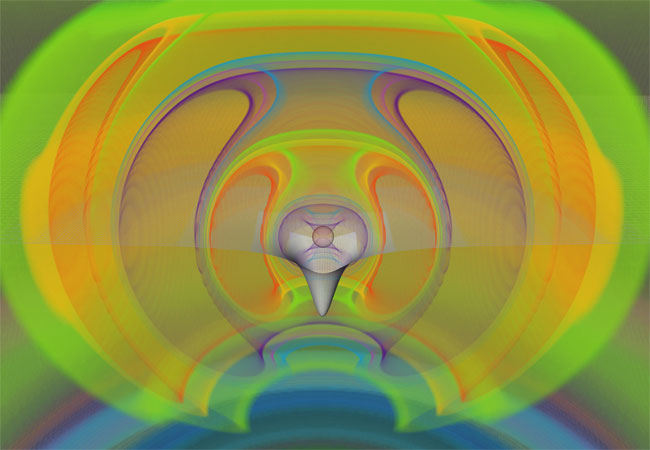 Gravitational-wave emission from a collapsing star

Since their discovery in the 1960s, scientists have sought to answer an important question: How massive can neutron stars actually become? By contrast to black holes, these stars cannot gain in mass arbitrarily; past a certain limit there is no physical force in nature that can counter their enormous gravitational force. For the first time, astrophysicists at Goethe University Frankfurt have succeeded in calculating a strict upper limit for the maximum mass of neutron stars.

With a radius of about twelve kilometres and a mass that can be twice as large as that of the Sun, neutron stars are amongst the densest objects in the universe, producing gravitational fields comparable to those of black holes. Whilst most neutron stars have a mass of around 1.4 times that of the Sun, massive examples are also known, such as the pulsar PSR J0348+0432 with 2.01 solar masses.

The density of these stars is enormous, as if the entire Himalayas were compressed into a beer mug. However, there are indications that a neutron star with a maximum mass would collapse to a black hole if even just a single neutron were added. ...


Using Gravitational-Wave Observations and Quasi-Universal Relations to Constrain
the Maximum Mass of Neutron Stars - Luciano Rezzolla, Elias R. Most, Lukas R. Weih
Know the quiet place within your heart and touch the rainbow of possibility; be
alive to the gentle breeze of communication, and please stop being such a jerk. — Garrison Keillor
Top
1 post • Page 1 of 1