Clouds in the LMC

Explanation: An alluring sight in southern skies, the Large Magellanic Cloud (LMC) is seen in this deep and detailed telescopic mosaic. Recorded with broadband and narrowband filters, the scene spans some 5 degrees or 10 full moons. The narrowband filters are designed to transmit only light emitted by hydrogen, and oxygen atoms. Ionized by energetic starlight, the atoms emit their characteristic light as electrons are recaptured and the atoms transition to a lower energy state. As a result, in this image the LMC seems covered with its own clouds of ionized gas surrounding its massive, young stars. Sculpted by the strong stellar winds and ultraviolet radiation, the glowing clouds, dominated by emission from hydrogen, are known as H II (ionized hydrogen) regions. Itself composed of many overlapping H II regions, the Tarantula Nebula is the large star forming region at the left. The largest satellite of our Milky Way Galaxy, the LMC is about 15,000 light-years across and lies a mere 160,000 light-years away toward the constellation Dorado.

As a portrait of the nebulas in the Large Magellanic cloud, today's APOD is certainly striking and fantastic.

Due to the riot of nebulas in the image it is actually somewhat hard to spot the brilliant Tarantula. It is the brightest part of the largest nebular complex in the picture, at lower left. 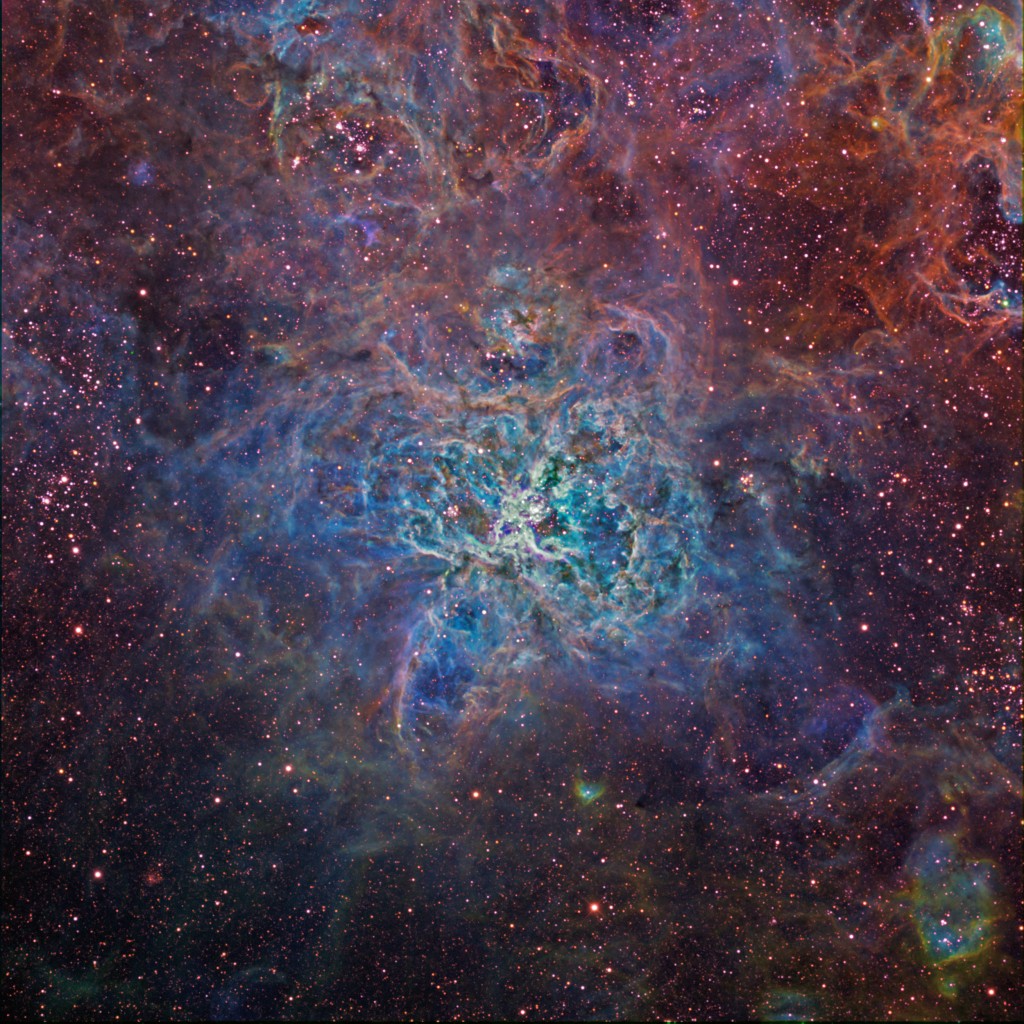 A very haunting image to me... nicely done, wide field, and lot of detail...

We are so fortunate that we have the two Magellanic clouds available for our study: and at reasonably high galactic latitudes. A huge help for measurements that expand our understanding of the universe.
Top

heehaw wrote:
We are so fortunate that we have the two Magellanic clouds available for our study: and at reasonably high galactic latitudes. A huge help for measurements that expand our understanding of the universe.

Are we seeing heliopauses? Is this what ours would look like?
Top

marvin wrote:Are we seeing heliopauses? Is this what ours would look like?

No. Those are shells I think from supernova explosions. Our own heliopause would be so tiny to be invisible in a picture of that kind.
Top

marvin wrote:
Are we seeing heliopauses? Is this what ours would look like?

No. Those are shells I think from supernova explosions.

https://en.wikipedia.org/wiki/H_II_region wrote:
<<An H II region or HII region is a region of interstellar atomic hydrogen that is ionized. It is typically a cloud of partially ionized gas in which star formation has recently taken place, with a size ranging from one to hundreds of light years, and density from a few to about a million particles per cubic cm. The Orion Nebula, now known to be an H II region, was observed in 1610 by Nicolas-Claude Fabri de Peiresc by telescope, the first such object discovered.

They may be of any shape, because the distribution of the stars and gas inside them is irregular. The short-lived blue stars created in these regions emit copious amounts of ultraviolet light that ionize the surrounding gas. H II regions—sometimes several hundred light-years across—are often associated with giant molecular clouds. They often appear clumpy and filamentary, sometimes showing bizarre shapes such as the Horsehead Nebula. H II regions may give birth to thousands of stars over a period of several million years. In the end, supernova explosions and strong stellar winds from the most massive stars in the resulting star cluster will disperse the gases of the H II region, leaving behind a cluster of stars which have formed, such as the Pleiades.

H II regions can be observed at considerable distances in the universe, and the study of extragalactic H II regions is important in determining the distance and chemical composition of galaxies. Spiral and irregular galaxies contain many H II regions, while elliptical galaxies are almost devoid of them. In spiral galaxies, including our Milky Way, H II regions are concentrated in the spiral arms, while in irregular galaxies they are distributed chaotically. Some galaxies contain huge H II regions, which may contain tens of thousands of stars. Examples include the 30 Doradus region in the Large Magellanic Cloud and NGC 604 in the Triangulum Galaxy.>>

So many superbubbles, love it!!