Explanation: From our vantage point in the Milky Way Galaxy, we see NGC 6946 face-on. The big, beautiful spiral galaxy is located just 10 million light-years away, behind a veil of foreground dust and stars in the high and far-off constellation of Cepheus. From the core outward, the galaxy's colors change from the yellowish light of old stars in the center to young blue star clusters and reddish star forming regions along the loose, fragmented spiral arms. NGC 6946 is also bright in infrared light and rich in gas and dust, exhibiting a high star birth and death rate. In fact, since the early 20th century at least nine supernovae, the death explosions of massive stars, were discovered in NGC 6946. Nearly 40,000 light-years across, NGC 6946 is also known as the Fireworks Galaxy. This remarkable portrait of NGC 6946 is a composite that includes image data from the 8.2 meter Subaru Telescope on Mauna Kea.

I'm always glad to see a beautiful portrait of a remarkable galaxy by one of the truly great RGB astrophotographers, Robert Gendler!

APOD. Robot wrote:
In fact, since the early 20th century at least nine supernovae, the death explosions of massive stars, were discovered in NGC 6946.

Rochesterastronomy wrote:
NGC 6946 is also known as the fireworks galaxy. This is our most prolific galaxy with now 10 confirmed supernovae discovered.

APOD Robot wrote:
The big, beautiful spiral galaxy is located just 10 million light-years away, behind a veil of foreground dust and stars in the high and far-off constellation of Cepheus.

Giant cluster in NGC 6946. Photo: HST.
My amateur impression of NGC 6946 is that it is mostly a post-starbirth galaxy. That is why we see so many supernovas in it. But there is only one really huge star cluster in it, which, on the other hand, is tremendous.

On the PC image you can see an extremely bright young star cluster (slightly to the right of the centre of the image) with an estimated mass of about 1 million solar masses and an age of about 15 million years. 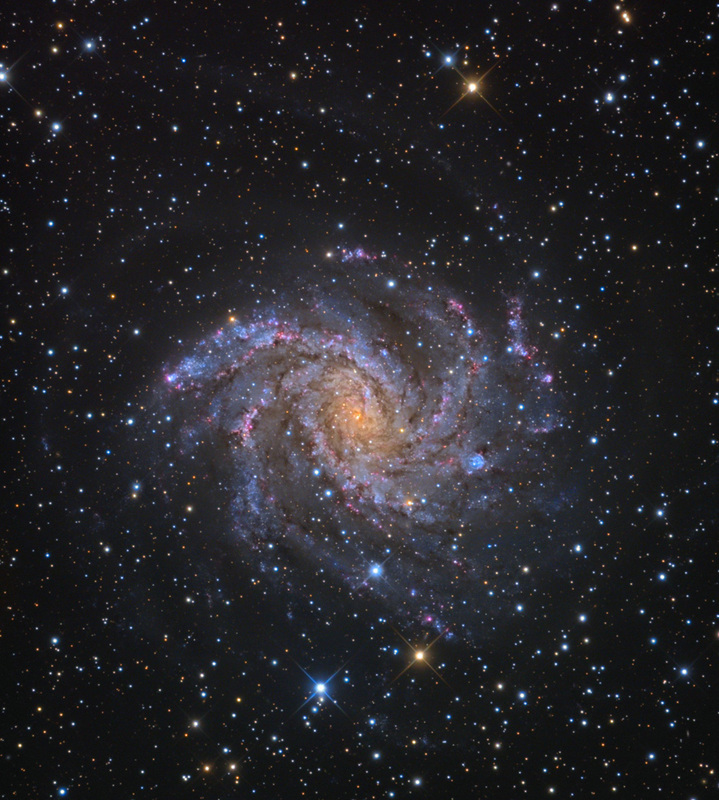 
It has been said that NGC 6946 is significantly reddened by dust in our own galaxy. That is undoubtedly true, but it is clear from good color pictures that the giant cluster in NGC 6946 is a truly unique feature which is much bluer than the rest of the galaxy. To see a particularly good picture of the color difference between the cluster and the rest of the galaxy, go to this page and scroll down to the sixth picture from the top. The color of the giant cluster jumps out at you. But the color difference between the cluster and the galaxy is apparent in the picture by Adam Block at right, too.

While NGC 6946 is reddened by dust in our own galaxy, it undoubtedly produces a lot of dust on its own, too. Star formation makes dust, and NGC 6946 has produced a lot of stars over the years.

I'm very glad to see a fine picture of such as fascinating galaxy as NGC 6946 featured as the APOD of today!

By the way, when you go to today's APOD and click on the "Discuss" link, you are sent to the discussion thread of another APOD instead.