In the Heart of the Tarantula Nebula

Explanation: In the heart of monstrous Tarantula Nebula lies huge bubbles of energetic gas, long filaments of dark dust, and unusually massive stars. In the center of this heart, is a knot of stars so dense that it was once thought to be a single star. This star cluster, labeled as R136 or NGC 2070, is visible just above the center of the featured image and home to a great number of hot young stars. The energetic light from these stars continually ionizes nebula gas, while their energetic particle wind blows bubbles and defines intricate filaments. The representative-color picture, a digital synthesis of images from the NASA/ESA orbiting Hubble Space Telescope and ESO's ground-based New Technology Telescope, shows great details of the LMC nebula's tumultuous center. The Tarantula Nebula, also known as the 30 Doradus nebula, is one of the largest star-formation regions known, and has been creating unusually strong episodes of star formation every few million years.

Today's APOD looks great in many ways. Fantastic many-colored swirls and storms of gas rage among torrents of reddish-yellow stars. The sheer power of this cosmic ferocity and fireworks is awe-inspiring!

The source of all this frenzy and fury is a small whitish-looking knot of stars at top center in today's APOD, where it is surrounded by a swarm of tiny pinkish-orange stars. The cluster is, of course, R136. The link to more information on this cluster provided by the caption takes us to a picture where the cluster looks white to golden-orange. In order to look so orange, there sure must be a lot of red giants in R136!

But wait - isn't that another false-colored picture? Maybe there are bright stars of all colors in R136? Maybe the blue appearance of the stars in the NASA/ESA/Paresce/O'Connell picture is just caused by filters and processing that make all the bright stars in R136 look blue? Is that it?

No,it sure isn't! This is what Wikipedia says about R136:

R136 is thought to be less than 2 million years old.[8][9] None of the member stars is significantly evolved and none is thought to have exploded as supernova. The brightest stars are WNh, O supergiants, and OIf/WN slash stars, all extremely massive fully convective stars. There are no red supergiants, blue hypergiants, or luminous blue variables within the cluster.

Actually, there is one red supergiant in (or just outside) the "outer halo" of R136. Here it is: 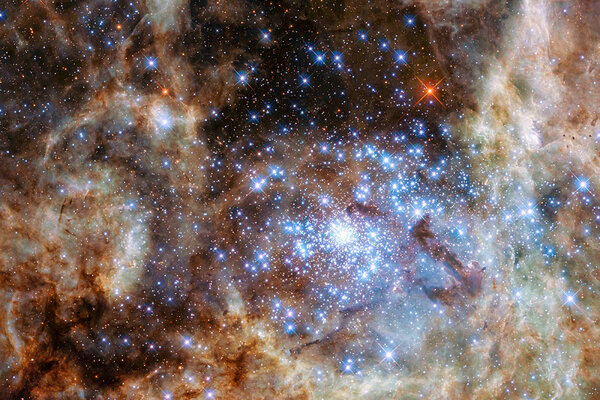 
So where is the red giant in relation to R136, then? Well, in the picture at left the star and its position compared with R136 is very obvious, and it looks brighter than it usually does, too.

So much going on in the Tarantula!
Orin

Imagine if you were the person chosen to explain to an intelligent life - from the Tarantula Nebula - why exactly we humans named their zone the Tarantula Nebula. You show them a tarantula. They've never seen anything like it before. "How beautiful!" they exclaim in unbounded wonder. "We are honored!"

randrewmiller@hotmail.com wrote: ↑
Mon May 21, 2018 5:12 pm
Imagine if you were the person chosen to explain to an intelligent life - from the Tarantula Nebula - why exactly we humans named their zone the Tarantula Nebula. You show them a tarantula. They've never seen anything like it before. "How beautiful!" they exclaim in unbounded wonder. "We are honored!"

All the more if they're an arthropod life form!
Chris