Dusty With a Chance of Dust

Explanation: It's storm season on Mars. Dusty with a chance of dust is the weather report for Gale crater as a recent planet-scale dust storm rages. On June 10 looking toward the east-northeast crater rim, the Curiosity rover's Mastcam captured this image of its local conditions so far. Meanwhile over 2,000 kilometers away, the Opportunity rover ceased science operations as the storm grew thicker at its location on the west rim of Endeavour crater, and has stopped communicating, waiting out the storm for now. Curiosity is powered by a radioisotope thermoelectric generator, but the smaller Opportunity rover uses solar panels to charge its batteries. For Opportunity, the increasingly severe lack of sunlight has caused its batteries to run low.

viewtopic.php?t=38373
Know the quiet place within your heart and touch the rainbow of possibility; be
alive to the gentle breeze of communication, and please stop being such a jerk. — Garrison Keillor
Top

Mars has its problems; we have ours, don't we just!
Top

Gosh, just wait til we have our colonies on Mars, with a million people "living off the land!" It will be a sweet existence. Water will be $450 per glass, but there will be NO cost for air conditioning!
Top

Regardless of the weather, I would move to Mars.... but the neighbors are too close...loud...and RUDE.... 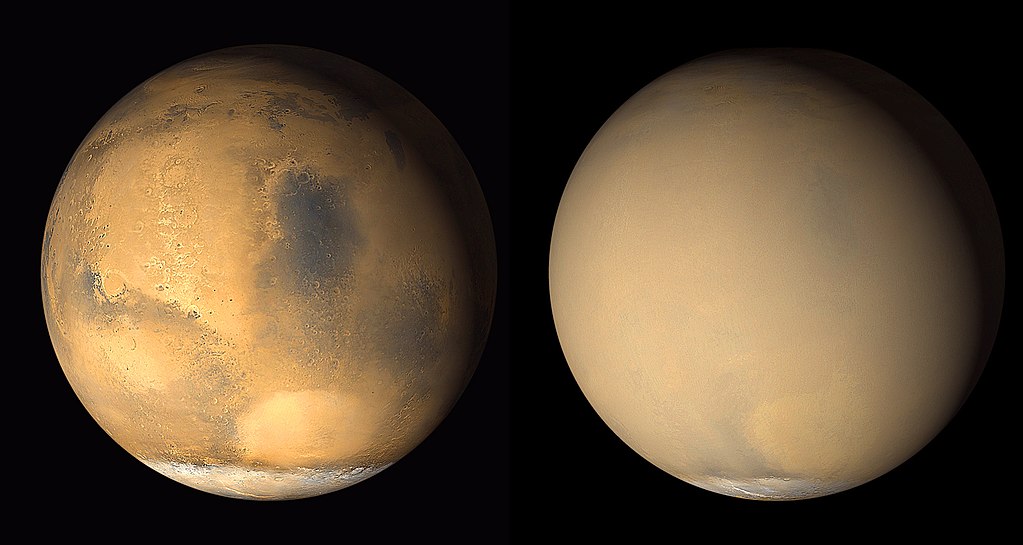 <<When the Mariner 9 probe arrived at Mars in 1971, the world expected to see crisp new pictures of surface detail. Instead they saw a near planet-wide dust storm with only the giant volcano Olympus Mons showing above the haze. The storm lasted for a month, an occurrence scientists have since learned is quite common on Mars.

As observed by the Viking spacecraft from the surface, "during a global dust storm the diurnal temperature range narrowed sharply, from 50° Celsius to only about 10°, and the wind speeds picked up considerably—indeed, within only an hour of the storm's arrival they had increased to 17 m/s, with gusts up to 26 m/s. Nevertheless, no actual transport of material was observed at either site, only a gradual brightening and loss of contrast of the surface material as dust settled onto it." On June 26, 2001, the Hubble Space Telescope spotted a dust storm brewing in Hellas Basin on Mars. A day later the storm "exploded" and became a global event. Orbital measurements showed that this dust storm reduced the average temperature of the surface and raised the temperature of the atmosphere of Mars by 30K. The low density of the Martian atmosphere means that winds of 18 to 22 m/s are needed to lift dust from the surface, but since Mars is so dry, the dust can stay in the atmosphere far longer than on Earth, where it is soon washed out by rain. The season following that dust storm had daytime temperatures 4 K below average. This was attributed to the global covering of light-colored dust that settled out of the dust storm, temporarily increasing Mars' albedo.

In mid-2007 a planet-wide dust storm posed a serious threat to the solar-powered Spirit and Opportunity Mars Exploration Rovers by reducing the amount of energy provided by the solar panels and necessitating the shut-down of most science experiments while waiting for the storms to clear. Following the dust storms, the rovers had significantly reduced power due to settling of dust on the arrays.

Dust storms are most common during perihelion, when the planet receives 40% more sunlight than during aphelion. During aphelion water ice clouds form in the atmosphere, interacting with the dust particles and affecting the temperature of the planet.

A large intensifying dust storm began in late-May 2018 and is persisting as of mid-June, with some forecasters expecting it to go planet-wide. By 10 June, as observed at the location of the the rover Opportunity, the storm was more intense than the 2007 dust storm survived by Opportunity.

It has been suggested that dust storms on Mars could play a role in storm formation similar to that of water clouds on Earth. Observation since the 1950s has shown that the chances of a planet-wide dust storm in a particular Martian year are approximately one in three.

Dust storms contribute to water loss on Mars. A study of dust storms with the Mars Reconnaissance Orbiter suggested that 10 percent of the water loss from Mars may have been caused by dust storms. Instruments on board the Mars Reconnaissance Orbiter detected observed water vapor at very high altitudes during global dust storms. Ultraviolet light from the sun can then break the water apart into hydrogen and oxygen. The Hydrogen from the water molecule then escapes into space.>>I

https://en.wikipedia.org/wiki/Climate_of_Mars#Effect_of_dust_storms wrote: ... water ice clouds form in the atmosphere, interacting with the dust particles and affecting the temperature of the planet.
... Dust storms contribute to water loss on Mars. ...

So, over a long time frame, the water on Mars will continue to be depleted, and dust storms may get worse.

I'm guessing that the rovers could really use a car wash.
Mark Goldfain
Top
7 posts • Page 1 of 1