Explanation: Cosmic rays from outer space go through your body every second. Typically, they do you no harm. The featured image shows some of these fast moving particles as streaks going through Fermilab's NOvA Far Detector located in Ash River, Minnesota, USA. Although the image updates every 15 seconds, it only shows cosmic rays that occurred over a (changing) small fraction of that time, and mostly shows only one type of particle: muons. The NOvA Far Detector's main purpose is not to detect cosmic rays, though, but rather neutrinos from the NuMI beam shot through the Earth from Fermilab near Chicago, Illinois, USA, 810 kilometers away. Only a few neutrino events are expected in NOvA per week, though. The NuMI / NOvA experiment is allowing humanity to better explore the nature of neutrinos, for example how frequently they change type during their trip. Cosmic rays themselves were discovered only about 100 years ago and can not only alter computer memory, but may have helped to create DNA mutations that resulted in, eventually, humans.

After watching the pretty blue lines for a few minutes, these two turned up. 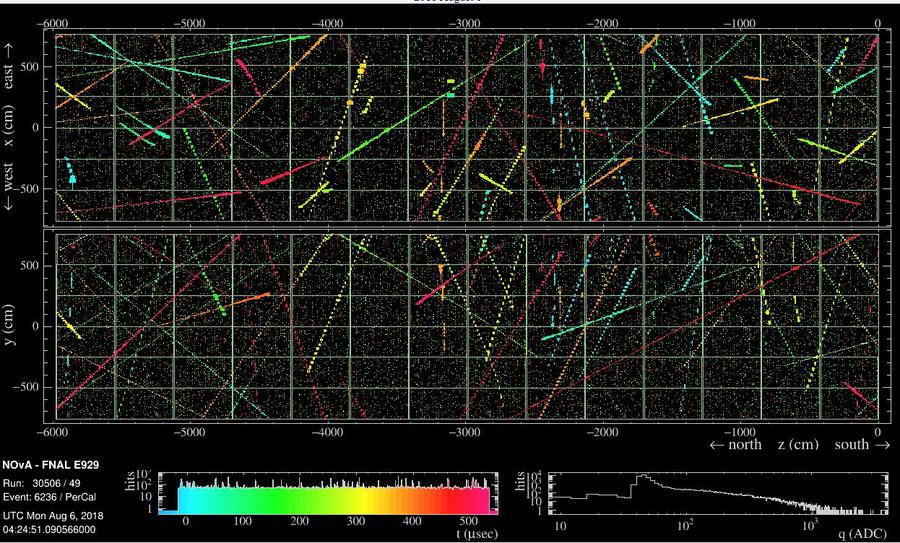 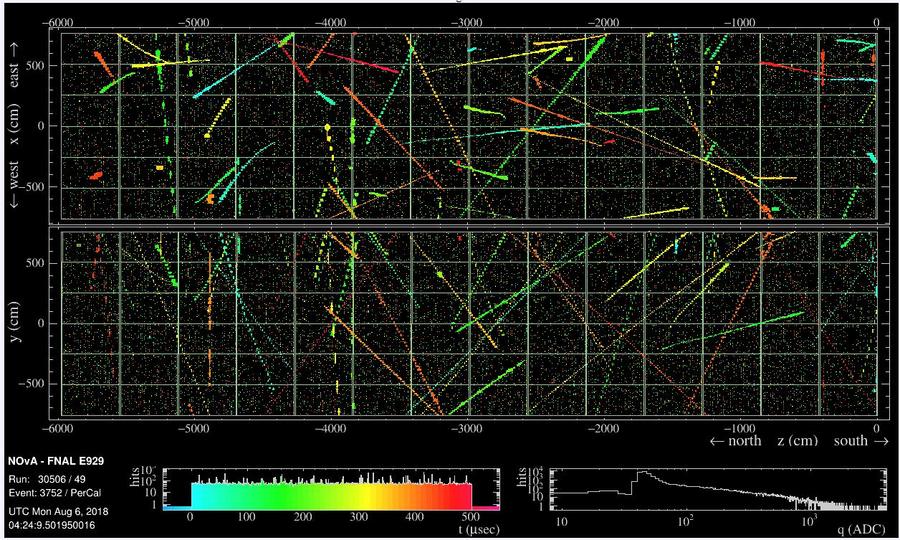 Should I be worried? How far underground should I go?

I'm guessing this was a small solar flare?
Top

What does the parttern look like over an extended period of time. ?
Is it entirely random, or is there more to it....

And, don't you just hate it when cosmic rays alter your computers memory.
Now, can we spot if human memory is altered also ??
Top

I also had several screens of intense activity, like those, and others that were a few blue lines, like you say...
Top

Or possibly someone tweeted?
Top

I thought it was Missile Command, from the old days...
Gee... so that is what is happening to my memory...

And space looks so...empty... but it is not... it is full...maybe that is why it is still expanding... it is full, like blowing up a balloon...but it is radiation and other energies, not air....

We clearly have a neutrino trade deficit with Canada; they need to build a wall and make Mexico pay for it.
Art Neuendorffer
Top

Could some one tell me why some streaks are curved??? And interesting enough, some are curved only at one end of the streak!!!
Top

From my understanding, it has to do with the trip that the particle takes through the detector. Some detectors are deep and cosmic ray tracks bounce around and look more like lint or hairs, but these are relatively straight. Makes me wonder if the detector is shallow.
Just call me "geck" because "zilla" is like a last name.
Top

We clearly have a neutrino trade deficit with Canada; they need to build a wall and make Mexico pay for it.

Whenever we suspect them of CP-violations, we're separating the neutrinos from their muons and keeping them in separate detection centers. And the liberal news media has not yet raised an outcry about this.
Mark Goldfain
Top

We clearly have a neutrino trade deficit with Canada; they need to build a wall and make Mexico pay for it.

Whenever we suspect them of CP-violations, we're separating the neutrinos from their muons and keeping them in separate detection centers. And the liberal news media has not yet raised an outcry about this.

Yes, but it's an environmental effect discovered by scientific research so it can't be real anyway - pull the funding.
Top

This one's my detector, so I'll take a swing at answering some of the questions.

Regarding the different colors: the hits are colored by time. So, earliest hits blue, latest red (that's the colored histogram in the screenshots posted above). The detector has different triggers which read out different lengths of time. The really colorful ones read out 500 microseconds at a go, filling up all the time colors. The blue ones are short, 50 microseconds long, so are much less busy (shorter readout) and all in the blue side of that histogram.

Why? The long 500 microsecond windows are read out 10 times a second like clockwork, so we save a snapshot of what the detector is doing. The shorter ones are saved in response to a potentially interesting pattern: a big splat from a high energy cosmic, something which might be a magnetic monopole, or an atmospheric neutrino, for example. These happen at a rate of ~40-50Hz.

If the beam was on (it's down right now for Fermilab's summer shutdown), we'd get a few beam neutrinos a week: but would save 500 microseconds around each beam spill just in case, which happens about once a second.

Regarding the curved tracks: we don't have a magnetic field in this detector, so if left alone, a particle will go straight. However, the particles aren't left alone: they have to go plowing through our detector. So, sometimes they scatter off a nucleus in the detector and take a turn. The amount of scattering a particle experiences is inversely proportional to its energy: so as a particle comes plowing to a halt, near the end of its track it can appear to fishhook. Note that most of the cosmic ray muons are energetic enough to simply punch straight through.

If you click on the "featured image" link http://nusoft.fnal.gov/nova/public/ you'll get the whole page, which comes with more explanations, and links to what the neutrinos actually look like.

I'll try to lurk here today and answer whatever other questions pop up!

This one's my detector, so I'll take a swing at answering some of the questions.

Hi Alec, thanks for answering our questions and joining in at the discussion board. When I wrote of depth I was referring to the dimensions of CCDs without knowing very much at all about what I was trying to describe. Given that your detector is measured in meters, it's most certainly not a CCD, so it would seem that my comment was almost entirely nonsensical in relation to NOvA!
Just call me "geck" because "zilla" is like a last name.
Top

As for results and surprises - we're getting more sensitive answers out of the long baseline neutrino oscillation measurements than we thought possible a few years back, primarily by deploying new machine learning techniques to better analyze the data we have. Both our experiment and the similar T2K experiment in Japan are showing ~2 sigma level hints that the CP violating phase might be near the value which would give us the largest signal, which would be cool. But nailing that down to the required >5 sigma level will require the next generation of experiments (DUNE and/or Hyper-K). What does this mean? "CP Violating Phase" is a measure of how differently do neutrinos oscillate compared to anti-neutrinos.

One surprise: NOvA's data is showing hints of (again, at sort of the ~2 sigma level) "non-maximal mixing". That is, not all the muon neutrinos wobble to tau neutrinos after one oscillation wavelength: a few percent do not. Other experiments haven't seen this yet, but if it holds up, it could make it harder for theorists to explain the origin of neutrino oscillations. Coming up with a theory to explain a 0% or a 100% effect is easier than explaining an oddball number in between.

Being an astronomer myself, I'm hoping for better surprises than these esoteric particle physics measurements. We've been working on a trigger which would recognize the burst of low energy neutrinos from a supernova somewhere in our galaxy. We think this will work, but we have to wait for Mother Nature to create us a new neutron star somewhere in the Milky Way to test it out. That's the suprise I'm rooting for

There is a clear maximum in the "q" (energy?) distribution ... also one or two minimum.

What do they signify?
Art Neuendorffer
Top

Alec, Thanks for your posts. Quite informative even for a bystander like myself. Hopefully Mother Nature created a neutron star long ago and its neutrinos are just about here.

There is a clear maximum in the "q" (energy?) distribution ... also one or two minimum.

What do they signify?

I guess I'll have to try to answer my own question.

The primary peak is due to the fact that cosmic ray atmospheric muons must be relativistic in order to have enough time dilation to live to reach the ground. This produces a low energy cutoff.

The secondary non-relativistic peak may be due either to radioactivity in the Earth or secondary muons generated by the primary relativistic muons.
Art Neuendorffer
Top

What do they signify?

Sorry, it was my wife's birthday yesterday, so I wasn't online all evening.

The "q" histogram is the charge distribution of the channel readouts. So, each pixel has some light dumped into the detector by the particle crossing the scintillator: it's digitized into an electrical charge and quantified.

There are indeed two peaks. The low-energy, larger peak to the left of this histogram is the "single photo-electron" peak. If there's one photon of light, and that hits our sensors (avalanche photo-diodes), that is the amount of charge one photon makes. Our APDs have a quantum efficiency of about 80%, so 80 out of 100 photons make a single photo-electron. This peak is usually due to noise: random radiation making a tiny amount of light, which usually get ignored.

The second peak is around 100 counts. It's pretty subtle, but there. That peak is the "minimum ionizing particle" peak. A muon trucking through the detector mostly loses the same energy per centimeter: that corresponds to many (20 or so) photo electrons at a time, making this peak. But, it's a landau distribution, so has a large tail of fluctuations, which you see in the "q" plot going out to many counts. Note that if a particle comes screaming through at high energy, it will often clobber things hard and you'll see big sprays around the tracks: some big showers will have a lot more high-q hits than others.

So, a quick summary: low-q peak is due to background radiation making single photo electrons: more subtle peak around 100 is due to the physics of charged particles passing through matter.

PS - in the display, we draw each hit with a dot whose size is proportional to q. So, the smaller single-PE hits are not as noticeable, although they are more common. The hits along the cosmic ray tracks are drawn larger, so your eye sees them well, although from the second MIP peak in the histogram, you see there are not so many of them in comparison.
Top

Thanks for sharing the added descriptions.

(And the above quote certainly shows wisdom. I hope she had a fun birthday!)
Mark Goldfain
Top
20 posts • Page 1 of 1