Explanation: A study in contrasts, this colorful skyscape features stars, dust, and glowing gas in the vicinity of NGC 6914. The complex of reflection nebulae lies some 6,000 light-years away, toward the high-flying northern constellation Cygnus and the plane of our Milky Way Galaxy. Obscuring interstellar dust clouds appear in silhouette while reddish hydrogen emission nebulae, along with the dusty blue reflection nebulae, fill the cosmic canvas. Ultraviolet radiation from the massive, hot, young stars of the extensive Cygnus OB2 association ionize the region's atomic hydrogen gas, producing the characteristic red glow as protons and electrons recombine. Embedded Cygnus OB2 stars also provide the blue starlight strongly reflected by the dust clouds. The nearly 1 degree wide telescopic field of view spans about 100 light-years at the estimated distance of NGC 6914.

No comments yet? How sad for the color red. And for hydrogen. Where would we be without it?
Just as zero is not equal to infinity, everything coming from nothing is illogical.
Top

When you post photos like this you really should give some details concerning the method, especially the filters used and the pallet to which they were mapped. We are raising an entire generation of want-to-be astronomers that think the Eagle nebula is blue.

At least in this case it appears that the Hydrogen line was mapped to red.

d_redwine@charter.net wrote: ↑Thu Aug 30, 2018 7:11 pm When you post photos like this you really should give some details concerning the method, especially the filters used and the pallet to which they were mapped. We are raising an entire generation of want-to-be astronomers that think the Eagle nebula is blue.

At least in this case it appears that the Hydrogen line was mapped to red.

According to Iván Éder, this colorful skyscape was processed using "common LRGB techniques."
Know the quiet place within your heart and touch the rainbow of possibility; be
alive to the gentle breeze of communication, and please stop being such a jerk. — Garrison Keillor
Top

I know I get a little goofy once in a while!
Orin

Eh. No, not intolerable in this context, particularly not when the color red is nicely contrasted with the color blue.

Anyway. I'm late to the party.

What I really loved about the NGC 6914 APOD is that the caption pointed out that the red background of the blue reflection nebulas is due to the enormous ionizing power of the nearby (well, relatively nearby) huge stellar association Cygnus OB2. According to the link provided by the caption, there are over 50 O-type stars in Cygnus OB2. I mean wowzers! That's a lot!

Compare that with Orion. The O-type stars I can think of there are Alnitak in the Belt, Iota Orionis in the Sword, Sigma Orionis A which ionizes the red background of the Horsehead Nebula, Theta 1C Orionis which does most of the ionizing of the Orion Nebula, and Lambda Orionis at the "top" of the Orion figure. That's five O-type stars. There are ten times more O-type stars in Cygnus OB2!

Anyway, I have long wondered why there is a red background behind NGC 6914. The blue color of NGC 6914 itself is far more straightforward. That is simple reflection nebulosity forming in a dusty environment around stars probably of spectral class B2 and later. These stars are not hot enough to ionize a red emission nebula, but they are bright and blue enough to light up background dust clouds which reflect the blue color of the stars our way. Easy, yes. But that much red emission nebulosity... we are talking a major ionizing source here! Huge amounts of energy! Probably some hot, hot stars! In fact, very many hot stars! And indeed...Cygnus OB2!

I found a brilliant annotated picture of the Gamma Cygni and NGC 6914 region, but unfortunately I can't post it here. It is too big, 753 KB. But I'll give you a link here. In the picture by Michele Vietri, you can see Gamma Cygni (Sadr) at dead center, NGC 6910 (a cluster possibly associated with Cyg OB2) to the left of Sadr, and tiny little NGC 6914 even further to the left. And what about Cyg OB2 itself? We can't see it at all, because it is so heavily reddened. Even infrared photography can hardly see the stars, but Chandra's X-ray sensors pick them out.

So, all in all, that's a nice APOD and very interesting background information! 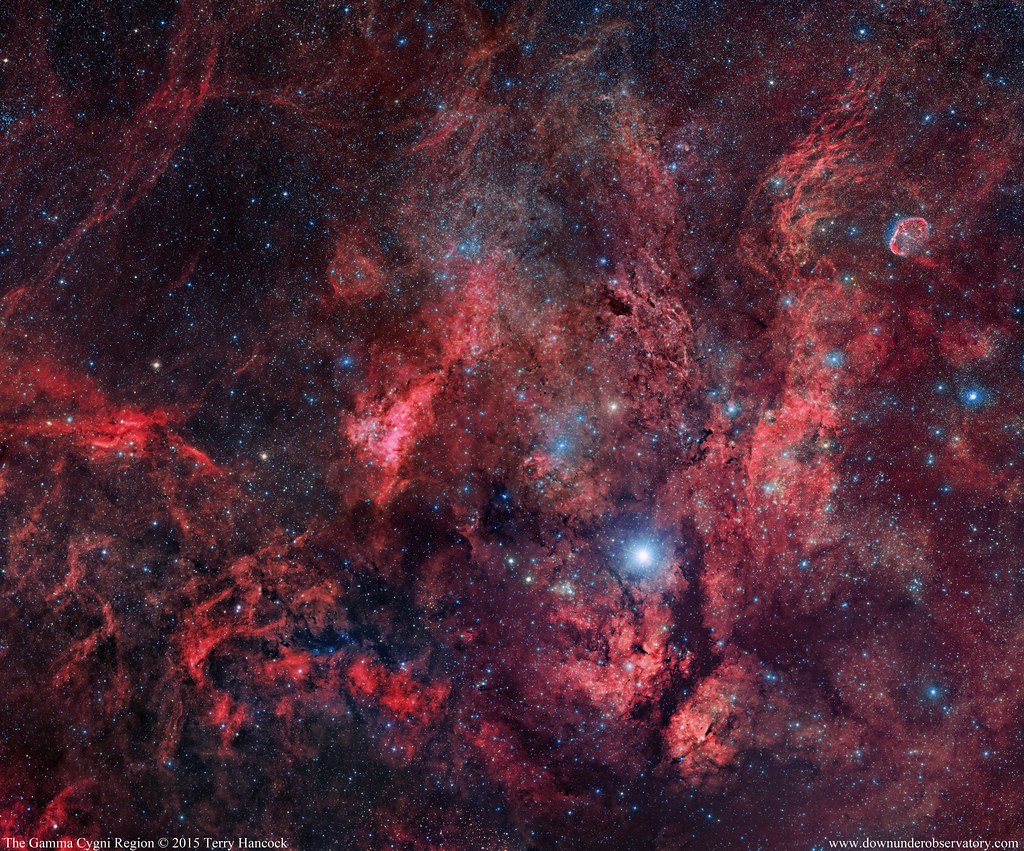 Gamma Cygni region and NGC 6914.
Photo: Terry Hancock.
Aha! I just found a nice picture that I can post!

In the picture at left, the bright star is Gamma Cygni. To the left (slightly lower left) of Gamma Cygni is the somewhat reddened, whitish-looking cluster NGC 6910. This cluster may be associated with Cyg OB2. Cyg OB2, if I have understood things correctly, is to the lower right of NGC 6910, completely hidden behind thousands of light-years of dust.


And NGC 6914? Can you see two small bluish patches to the lower left of NGC 6914? The little blue fuzzies appear to sit on a broken ridge of rather deep red clouds, and there is a broad dark dust cloud above the blue reflection nebulas. The dark dust cloud is slightly cat-ear-shaped, making the two blue fuzzies and the two triangles of black look a bit like a black cat with blue eyes.