Explanation: Irregular galaxy NGC 55 is thought to be similar to the Large Magellanic Cloud (LMC). But while the LMC is about 180,000 light-years away and is a well known satellite of our own Milky Way Galaxy, NGC 55 is more like 6 million light-years distant and is a member of the Sculptor Galaxy Group. Classified as an irregular galaxy, in deep exposures the LMC itself resembles a barred disk galaxy. Spanning about 50,000 light-years, NGC 55 is seen nearly edge-on though, presenting a flattened, narrow profile in contrast with our face-on view of the LMC. Just as large star forming regions create emission nebulae in the LMC, NGC 55 is also seen to be producing new stars. This highly detailed galaxy portrait highlights a bright core crossed with dust clouds, telltale pinkish star forming regions, and young blue star clusters in NGC 55. 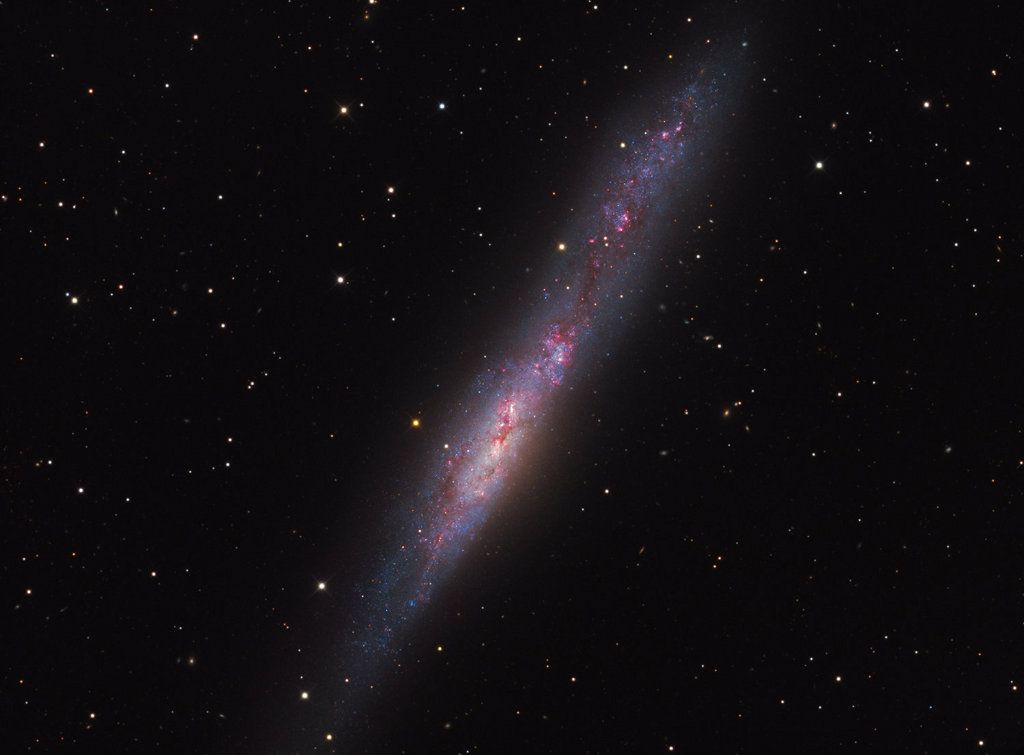 NGC 55 by Martin Pugh.
Martin Pugh's portrait of NGC 55 is definitely one of the best pictures I can remember seeing of this galaxy!

The picture used by Wikipedia to show the appearance of NGC 55 is an utter bore compared with Martin Pugh's splendid portrait.

Today's APOD caption calls the core of NGC 55 "bright". That's possible, but the brightness of the core can't be judged visually because of intervening dust lanes. We can see, however, that the bulge of NGC 55 is faint, pale and small, and it barely bulges. Galaxies with such puny bulges are typically lightweight, because galaxies with bright yellow bulges pack a punch in their bulges when it comes to mass. That is because bright yellow bulges are mostly made up of huge numbers of faint red dwarfs, which, although lightweight, are nevertheless quite massive in relationship to the faint light they produce. 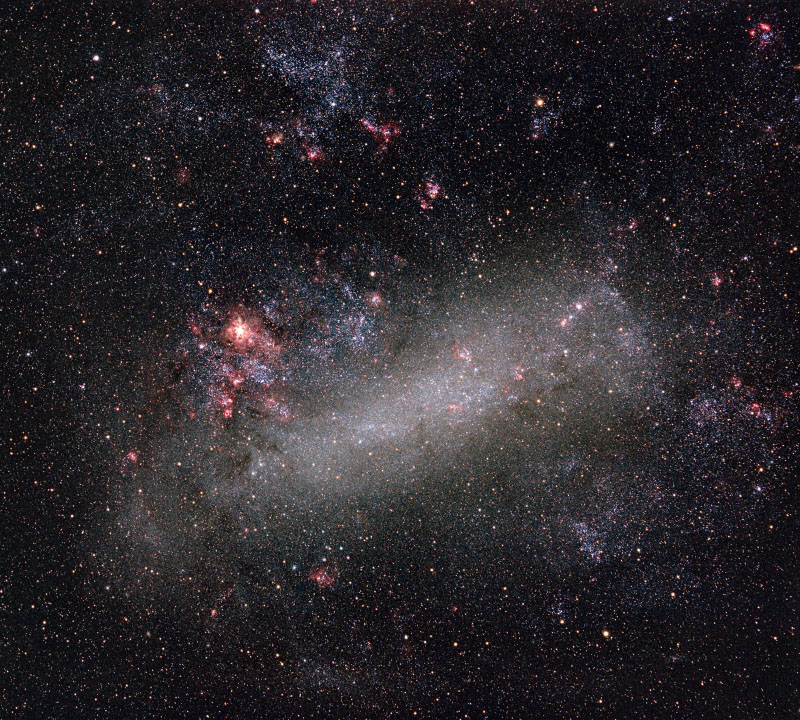 
I have tried to find an estimate of the mass or even size of NGC 55, but I have come up empty. So I will make a guess myself, based on the appearance of the galaxy. What we can see of it (excluding any dark matter halo) is clearly a lot less massive than the Milky Way, because of the galaxy's puny bulge. But NGC 55 is large and massive enough to be flattened into a pancake shape by rotation, and it has (an admittedly rather thin) central dust lane. It has both a starforming thin disk and a non-starforming thick disk. Its disk is asymmetrical, because it extends farther to the upper right (in today's APOD) than to the lower left as seen from the yellow bulge. But judging by its sideways appearance, it has a lot in common with a spiral galaxy.

I thought this was an edge on spiral?
Top M101, the Pinwheel galaxy. It is asymmetrical. Photo: Robert Gendler. The Pinwheel Galaxy (also known as Messier 101, M101 or NGC 5457) is a face-on spiral galaxy distanced 21 million light-years (six megaparsecs)[3] away from Earth in the constellation Ursa Major.
...
M101 is asymmetrical due to the tidal forces from interactions with its companion galaxies.

NGC 4631 (also known as the Whale Galaxy or Caldwell 32) is a barred spiral galaxy in the constellation Canes Venatici. This galaxy's slightly distorted wedge shape gives it the appearance of a herring or a whale, hence its nickname.

NGC 55, also occasionally referred to as The Whale Galaxy, is a Magellanic type barred spiral galaxy located about 7 million light-years away in the constellation Sculptor.